A 700 year old stone wall has been discovered in the grounds of Parliament which could show the shoreline of the Thames before the embankment was constructed. The stone wall dating from around 1300 was uncovered during the construction of a new basement transformer room to the south of the palace in Black Rod’s Garden. 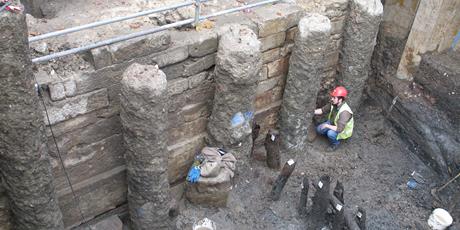 The oldest finds were timber beams from a waterfront structure dating from before the 13th century, but the most significant survival was the stone river wall which stands about 3m or 9 feet high.

The wall is made from carefully dressed stone blocks of substantial size, which remain in remarkably good condition. The wall follows the approximate eastern fronts to the buildings of the medieval Palace, such as St Stephen’s Chapel and the king’s private chamber, known as the Painted Chamber. Gardens were later extended out into the River Thames, and the old wall-line remained hidden until the current work.

Luckily, the new concrete piles did not damage the old wall and it has been left in situ, recorded, and re-covered using sand.

In front of the stone wall was the remains of a timber retaining wall constructed from oak and elm piles and wattle hurdles, which was probably contemporary to the stone wall; the posts followed the line of an inlet which once flowed into the Thames from the west. The wood was also in a good state of preservation following centuries of burial in the wet ground.

The main small finds from the excavation were pieces of patterned, medieval ‘Westminster’ floor tiles, so-called because they were first recognised in the Abbey and Chapter House nearby during the 19th century. It was this kind of tile which was used for inspiration by Augustus Welby Pugin when he designed the floor tiles of the Victorian Palace. An iron knife or dagger was discovered too, as well as what appears to be a sail needle.

Further excavations may take place to find the southern extent of the wall sometime in the future although no firm date has been set.

A full report is due from the Museum of London Archaeologists when all the analysis of the discoveries has been completed.