As part of a wider report, the bureaucrats eye turned eastwards and to the slums and terraced houses of the East End. Needing an example to build upon, they settled upon Shoreditch and Bethnal Green which typified a patch of London that could be used as an example of what should be done throughout the east London.

The area chosen is nearly 200 acres, bounded by the railway and City Road to the south, and the canal to the north. 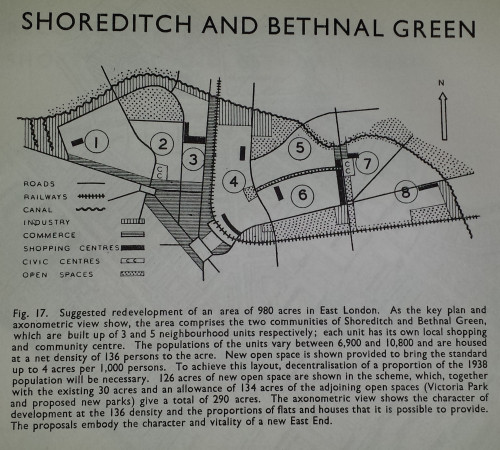 However, as the report noted, much of the damage was in small patches, with little widespread damage in contiguous areas, so rebuilding on a grand scale would be constrained by the ability to join up these patches into larger more manageable plots of land.

The stock of housing at the time was described as being mostly around 100 years old and not economically viable for modernisation. Of the houses, around 60 percent were termed as slum housing. In addition, many of them had small workshops built over the previous small gardens, leaving barely any space at the back, and with narrow streets in front, light and space were in short supply.

Newer housing, mostly build by the council or social housing groups was described as decent, if having a grim institutional aspect.

What was proposed is that post-war building work should concentrate initially on a series of 10-story high towers mostly for single people and small families, with new terraced housing added for families with children.

The backyard factories should be removed to purpose build facilities where individual traders would be able to rent a small plot to work in.

This would not be done on a scale encompassing the entire of Shoreditch though, but by sub-dividing the area into smaller “villages”, each with their own cluster of pubs, factories, housing and primary schools. With new larger roads bisecting the area to replace the older narrow streets, the aim would be to ensure that most people would be able to live and work without crossing a main road.

This pattern of mini-villages within London would house between 6,000 to 10,000 people each. 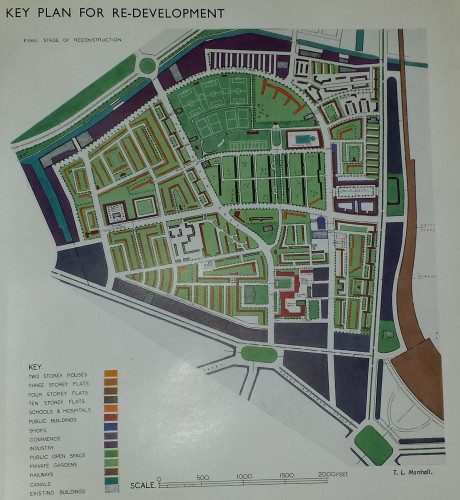 One decision which would probably cause howls of protest today is the removal of street markets as an impediment to road traffic — they were to be shunted away to newly created market squares, alongside the new shopping parades that were such a beacon of hope then, and usually benighted wastelands today.

One of the other advantages to the road rebuilding though was that the removal of so many narrow streets would itself lead to the creation of larger plots of land — which was all the easier to build blocks of flats on.

The report also noted the importance of the pub to the social life of the East End, but then declined to comment further, citing the likely shrinkage of London’s population as people moved to new towns. They dumped the whole matter onto the Home Office to look at.

And this raises the key factor, London was a shrinking city, so any planning for rebuilding was more about redistributing existing housing needs more equitably, not about providing more housing.

The great council post-war housing boom which many cite as something we should return to today was actually more of a like-for-like replacement of buildings being demolished as unfit for purpose. If the Germans didn’t bomb it, the UK government demolished it. The replacements were better, and to cope with growing populations, there were more of them. But not so large a difference in London, which had a shrinking population at the time.

But, in an age of the motor car — just look at the size of Shoreditch railway station. 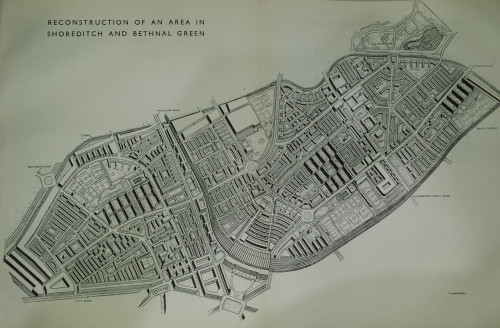 The plans were never put to full use, they were simply an example of how an area should be treated during reconstruction works which were expected to take no more than a decade to complete. Maybe to our long term gain, the economic weakness of the UK economy after the war put paid to many grand schemes, and a lot of rebuilding was undertaken piecemeal as it could be afforded.

For that, many a Victorian terraced house in London should be deeply relieved.