An incredibly well-preserved Roman mosaic that may have decorated a room in an important building has been discovered near London Bridge in Southwark.

This is a Roman era alley in the City that was discovered during the soon to be completed Bank tube station upgrade project.

A 30-year project to uncover the secrets buried beneath Spitalfields has finally come to a conclusion with new revelations about a Roman burial.

Another of those maps that will soak up a few hours randomly zooming around - a map of prehistoric to medieval archaeology under London.

Found under the streets of London, a unique Roman stylus, with the most elaborate and expressive inscription of its kind has gone on display.

Giant “Ice House” discovered under the streets of Marylebone

A long-lost Ice House has been uncovered during building works under the Regent's Crescent in Marylebone.

The mystery of the London skeleton still wearing his boots

A skeleton, lying face-down deep in the Thames mud, still wearing a pair of thigh-high leather boots has been discovered by archaeologists in Bermondsey.

Teeth of the parasitic Lamprey fish found in central London

Keratin ‘teeth’ belonging to the gruesome lamprey fish have been identified in London’s archaeological record for the first time.

Museums by appointment: The London Roman Wall and Bastion

In a basement underneath Merrill Lynch's London office can be found an exceptionally well-preserved section of Roman Wall, and a Medieval Bastion, and they're both free to visit. 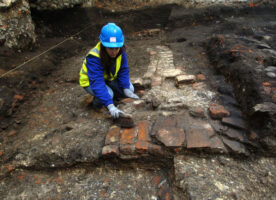 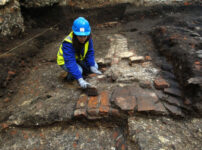 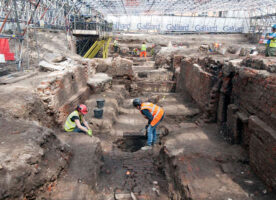 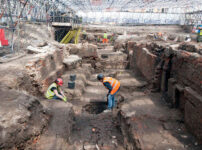 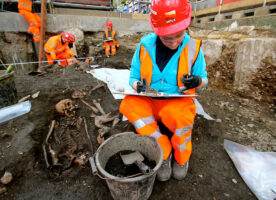 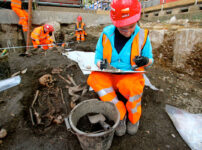 The bleak fortunes of poor and migrant communities living in London up to 450 years ago have been revealed by the analysis of thousands of skeletons unearthed by MOLA archaeologists during construction of the Elizabeth line station at Liverpool Street. 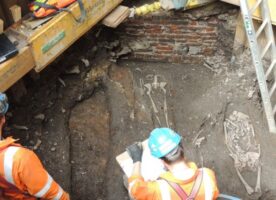 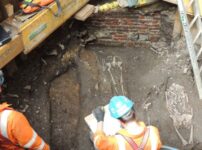 An angry Londoner once wrote "The sudden resurrection of the Dead in Southwark is become the general Subject of Conversation, and has render’d Death far more frightful and Terrible,"

Crossrail discovers a lost river and the Grains of Paradise

A lost river, only recently rediscovered has revealed some fascinating insights into daily life in Tudor London, including the exotic Grains of Paradise.

The Museum of London has opened a new display which shows off finds from the lost Walbrook valley and beyond and represents over 170 years of excavation in London.