A muddy legacy from the Crossrail project is already seeing record visitors — of an avian kind.

A previously lost wetland near the mouth of the Thames has been recreated with the help of some 3 million tonnes of soil dug from under London during the Crossrail works, and this winter the new wetlands saw the largest count of wintering birds in the area. 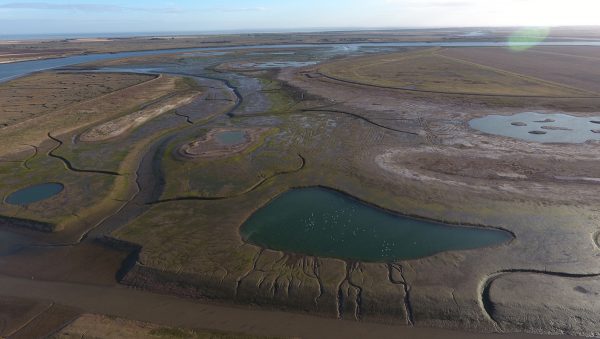 The formerly lost wetland is twice the size of the City of London and was created on Wallasea Island in Essex, which is being managed by the RSPB.

Only two years after the work was completed and the sea wall breached to create the new wetland, the wildlife making its home on the Island is reaching record numbers.

Rachel Fancy, Wallasea Island Warden, commented: “The highest count of wintering birds ever recorded has now reached 12,000, meaning that the reserve is becoming a haven for wintering birds. The mud is holding increasing amounts of food for them to feed on.”

In addition to this, plants such as samphire, sea lavender and sea aster are expected to thrive.

Rachel continued: “We had 100 pairs avocets breeding on Wallasea last year and it looks to be similar numbers this year. For a bird that was once threatened with extinction across the country, this is a remarkable success story. We have also seen increased numbers of other birds that didn’t breed here before such as terns which have been diving into the new lagoons for fish.”

The range of species in the marshland on Wallasea has the potential to rival the diversity of rainforests due to the nutrients being deposited during daily tidal surges. Mud and plants also bring the added environmental benefit of absorbing pesticides, other pollutants and carbon dioxide.

The wetland restoration began on Wallasea in 2006 when sea walls were breached on the northern edge of the island. By 2025, the RSPB’s Wallasea Island Wild Coast Project plans to have created 148 hectares of mudflats, 192 hectares of saltmarsh, and 76 acres of shallow saline lagoons.

About eight miles of coastal walks and cycle routes will also be created as part of the project.