Charing Cross Station could be extended across the Thames

A plan has emerged that could see Charing Cross station rebuilt in a style similar to Blackfriars, with platforms running across the Thames.

A long term report into upgrades needed across the Kent routes for Network Rail looks at a number of options, many of which are routine capacity upgrades needed by 2024, but also some blue-sky thinking for the future.

One of the more radical proposals is to overcome capacity restrictions at Charing Cross station. At the moment, it has six 12-car platforms and half of the platforms are very narrow. Additionally, there are restrictions on what sorts of trains can use the station, as not all of them can comply with the required selective door opening.

Network Rail suggests one solution would be a major rebuild of the station, along the lines of Blackfriars, extending it across the Thames, so that wider platforms can support longer trains.

It’s also speculated that such an arrangement could see Waterloo East closed.

Network Rail notes, unsurprisingly, that there would be many issues with “a project on this scale”.

Financials would be a serious constraint, as the existing Charing Cross station would probably need to be demolished and rebuilt to cover some of the cost, but it is currently shared with offices and a hotel leaving limited room for additional development.

That’s all for the distant future though.

Elsewhere, the report looks at more immediate issues, such as how to run more 8 and 12-car trains into increasingly crowded spaces.

Issues such as the way the 3rd-rail power supply drops sharply when longer trains are introduced need to be addressed, and more strategically than in the past.

Station upgrades would also be needed at stations such as Waterloo East and Woolwich Dockyard, where due to the mixture of trains on the routes, reliably offering selective door opening would be difficult.

The shuttle service that runs to Bromley North could end up with drivers at either end of the trains, so that they can turn around faster, increasing the number of trips per hour.

Services into Victoria that already run with 8-car trains where stations cannot be lengthened may see the trains replaced with higher capacity (aka, fewer seats) trains to cope with demand.

One of the more curious issues is that London Bridge can allow more trains into London during the rush hours than it can get back out again. An option being considered is to turn the little-used curve between Charing Cross and Canons Street into a siding, to store an extra train each morning and evening.

Further ahead, upgrades at Victoria Station and dealing with bottlenecks at Herne Hill and Catford are marked for attention, possibly with a new rail flyover to avoid junction conflicts.

Capacity issues at Hayes also exist, but there’s also the possibility of the Bakerloo line being extended and taking over those lines.

There is also the proposal that crops up every so often, to extend the future Elizabeth line from Abbey Wood out to Gravesend. The line has now been safeguarded for the extension out just past Gravesend to the stabling yards at Hoo Junction.

Freight is not overlooked, with a possible short rail link near Greenwich for the Angerstein Wharf to avoid a 21 mile capacity absorbing diversion that freight trains heading west currently undertake.

A number of new stations are also being investigated, such as reopening Camberwell and Brixton East.

The 77 page document is here, and a consultation on the plans is open now. 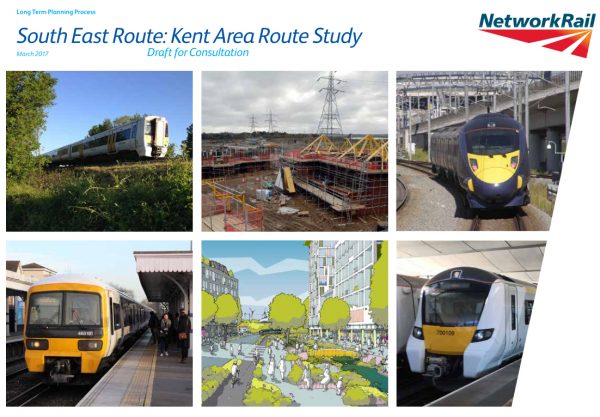