Published 6 August 2010 by Events and Tours

It’s that time of year again as the catalogues are posted out for the London Open House Weekend (18th-19th Sept) and I peer through it for all the juicy properties that need pre-booking when the website goes live on Monday 9th August at 10am.

Update: The exact page of their website to locate properties and book tickets looks like it will be http://www.londonopenhouse.org/public/london/find/

As with last year, quite a lot of the properties are booked by making a phone call or sending an email – and the chance to visit the BT Tower will be by email ballot.

There is also a chance to go inside the iconic London Underground HQ building, which I am fairly sure hasn’t been available before.

As last year, for your convenience, I have trawled through the catalogue and below is the list of all the venues you need to book tickets for. I have also though put the data into a Google Map to make it possibly easier to plot routes between properties.

Note – the map/list below is only for pre-booked properties, the full list of venues you can just turn up on the day and go inside is vastly larger and will be on their website, or you can pick up one of the catalogues. 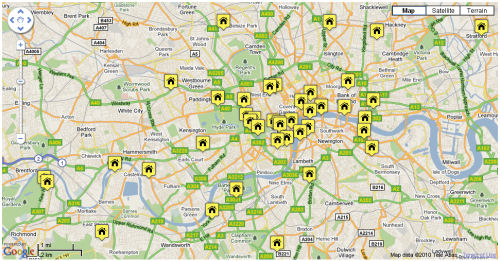