Born in Lancashire, he moved to the USA exactly 200 years ago, in 1818, and worked as an engraver and self-taught painter.

His works are a mixture of landscapes of the USA, but also allegories and fantasies. His factual landscapes were however almost fantasy as he had a strong aversion to modern life (as it was 200 years ago), and painted landscapes that were manmade, but as he preferred them to be.

He was living through the Industrial Revolution and deplored the rise of machine over man, of urban cities over small quaint farms. His works are harking back to a life that was in many cases far harsher to live in, even if it looked prettier on a canvas.

His most famous work, the Oxbow is on display here for the first time in the UK, and unsurprisingly, in pride of place. Depicting a romantic vision of rural Massachusetts, it actually shows a very man-made landscape with ordered fields filling the isle in the middle. 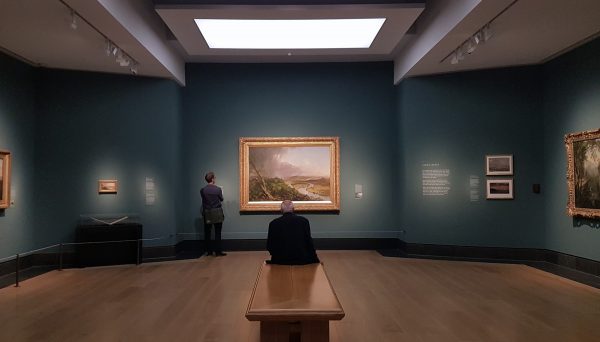 It’s also a political protest, painted at a time when Cole was vocal in opposing the westward expansionist plans of US President Andrew Jackson.

It drew admiration and criticism in equal measure, and the exhibition has put a counterpoint on display as well, Progress (The Advance of Civilization) by Asher Durand which shows a more realistic vision of America, painted in a similar style with a small trading town next to a river.

The exhibition brings together 58 works, most of which are borrowed from North American collections. Cole’s paintings are also shown alongside a few of the painting by Turner and Constable that inspired him.

It’s an exclectic mix, of British and American landscapes, and then the sort of fantasy cities that come straight out of one of Cecil B. DeMille’s Hollywood epics. As unrealistic a portrait of grand cities you will ever see – no ancient city was ever so grand. 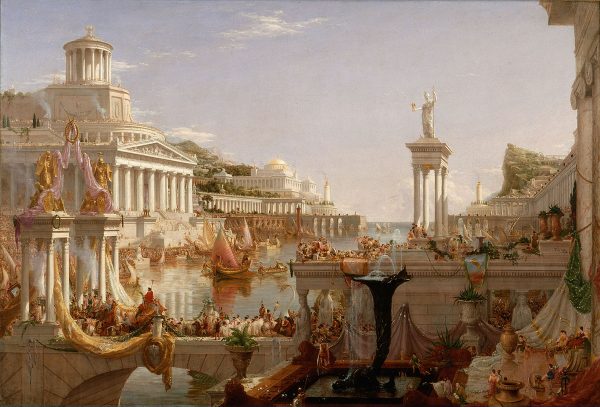 This exhibition is a rare chance to see this American focused artist on display in the UK. His works are undeniably, of a certain taste, but the sweeping landscapes and fantasy cities are likely to appeal to people with an interest in fantasy writing as much as art.

The exhibition, Thomas Cole Eden to Empire is open until 7th October at the National Gallery. Entry is £10-£12.