Following the recent departure of the US Embassy, plans are afoot to revamp the neighbouring Grosvenor Square now that the security paranoia has moved away.

The Square had been managed by the Royal Parks, but last month was handed back to the Grosvenor estate, which owns rather large chunks of property in central London. 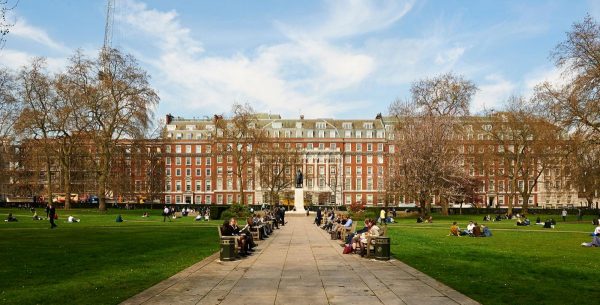 A survey last year found that few people knew about the Square, and that those who did know about it felt it was imposing and unwelcoming. Unsurprisingly considering its location, the Square was best known to rich older people.

The return of management responsibilities for Grosvenor Square to Grosvenor in May 2018 has presented them with an opportunity to improve the historic square’s civic, aesthetic and cultural contribution to the area, and broaden the demographics of its visitors, away from rich older folk.

Last changed in the 1970s, it’s a classic posh square, with lots of lawn, lots of big trees, and not very much in the way of seating or amenities.

Grosvenor are now calling for proposals to re-imagine the historic square and open it up to more visitors.

Although the park is now going to be managed by the Grosvenor estate, and it was they who laid out the square originally, it’s been subject to two Acts of Parliament.

Although first laid out in 1722, In 1835, an act allowed the Square to be reserved solely for residents of the houses around the Square. That caused a problem in 1946, when a memorial to President Roosevelt was proposed for the park. That meant a new Act of Parliament when permitted the statue to be erected, and park to be opened to everyone at last, managed by the Ministry of Works, whose powers were much later taken over by the Royal Parks in 2006.

Although the Square remains a public park, it is once again being managed by the Grosvenor estate, who want to revamp it to make it more welcoming to visitors.

A panel of experts will asses the ideas when the deadline closes at the end of October. Ideas can be submitted via their website here