This, as so many of the City of London gardens is the site of former religious worship, but unlike most other gardens, this isn’t the graveyard, but the remains of the church itself. 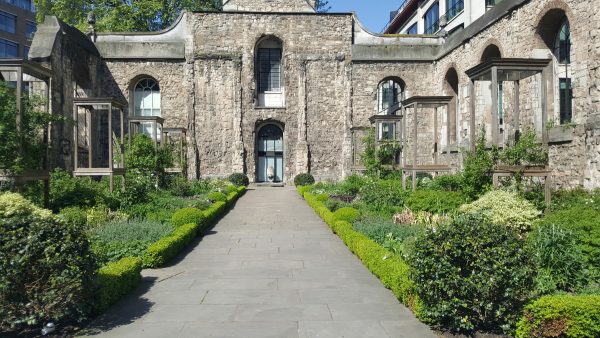 The garden is located on the site of the Franciscan Church of Greyfriars, a church that was founded in 1225, and is notable for having four Queens buried there. The regal connection is thanks to it being the second-largest church in London at the time, and was part funded by Queen Margaret, second wife of Edward I.

One of he most famous people to be buried there was one of the so-called She-Wolves, Isabella of France, Queen  for King Edward II, who lead an insurrection against the King, assisted by Roger Mortimer, 1st Earl of March.

Mortimer was de facto ruler of England before being himself overthrown by Edward’s eldest son, Edward III. Accused of assuming royal power and other crimes, Mortimer was executed by hanging at Tyburn.

Isabella was allowed to live, and died in 1358 at Hertford Castle before being returned to this church in London for burial.

The old church was destroyed in the Great Fire of London, but the Wren designed replacement was itself then destroyed by bombing in 1940.

Only the west tower survived the bombing raids, and is now a private home.

In 1989, the garden was relaid as a rose garden, while clematis and climbing roses weave their way up 10 tall wooden towers which represent the pillars that once held the roof. Box-edged beds representing the original position of the pews. An avenue of trees marks the former nave.

Just outside the garden, next to the road, a modern replica of the lost wall that used to stand there was added in 2001. 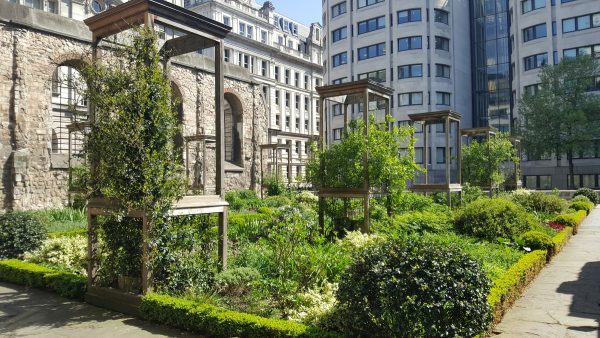 The gardens were also given another makeover recently, by the arrival of a sculpture to mark the 350th years of Christ’s Hospital School in the City of London (1552-1902).

Sculptor, Andrew Brown was selected following an open competition run by the City of London. The finished bronze, cast at The Bronze Age Foundry in London, is 2.4m long and 1.5m high and is mounted on the wall of the garden. 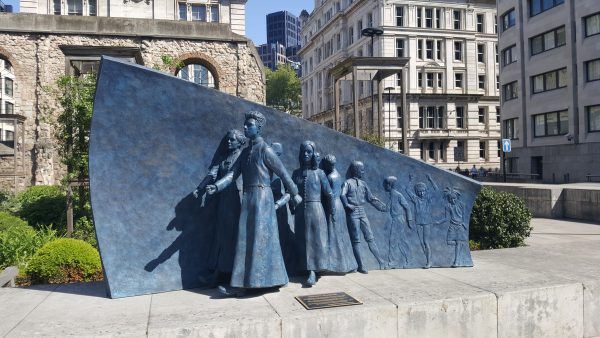 The sculpture is designed to curve gently, reflecting the care and support provided to children, who flow from the youngest entering the School to confident adolescents marching boldly into their futures. The back of the sculpture features a verse written about Christ’s Hospital by Samuel Taylor Coleridge who was a pupil from 1781 to 1791, along with a copper plate drawing of the Priory buildings at the time the School first occupied the site in 1552.

Although there are main roads on two sides of the garden, it’s always been a well-visited garden on my many wanderings past.

Just watch out for the wolves.

NEWSLETTER
Tagged with: City of London, great fire of london