There has been a church tower on the banks of the Thames in Fulham for over 600 years ringing out the hours and calls to prayer, and I was given a chance to have a climb up the 15th century tower to have a look at the clock and bells within.

There is a reason for that – as the church is currently fund raising for a restoration project to stop some ongoing damage to the tower getting any worse. It is always good to see something before restoration is carried out – and sometimes to later compare before and after photos. 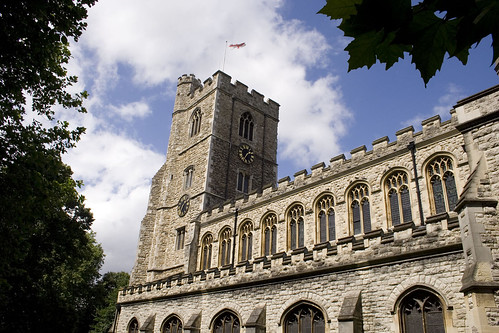 The church itself, sits on the north bank next to Putney Bridge and there has been a church on the site for at least 900 years, although most of what you see today is a Victorian reconstruction. Fortunately, the Victorians left the church tower alone, so that is, with some renovations, largely as it was when construction started in 1440 – during the reign of King Henry VI.

The tower was constructed both as a local landmark, but also to house the bells – and it is a  later set of bells which are now causing most of the problems, or more accurately, the wooden frame they sit in which is causing the problems.

The current bells were hung in 1729 as recasts from previous bells to mark the opening of the first permanent Fulham Bridge over the Thames, although a couple were replaced in 1759 – and are hung in a large oak frame that sits inside the tower.

However, over the centuries, the frame has dried out and suffered, and although tightened and strengthened in 1908 it now flexes and moves and the movement makes the bells difficult to ring and is damaging the tower. 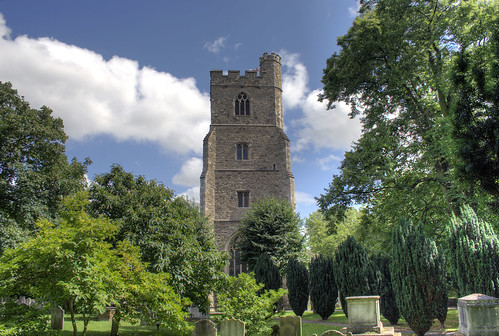 Part of the difficulty is that the bells are also laid out so that when rung, some swing north-south, and the others east-west, which adds to the stresses that some 4.5 tons of swinging metal puts on the wooden frame, and transfers to the stone walls.

There is in fact cracks running down the length of the tower – which is sadly being made worse by prior repairs in the 1960s using cements instead of flexible lime mortars.

The aim of the restoration project is to put a metal ring around the interior of the tower to tie the walls together, and then mount a new metal bell frame below the existing wooden frame, where the stone walls also happen to be stronger.. The wooden frame is listed, so will remain in place as an unused historic artifact.

The total cost of repairing the tower and rehanging the bells is expected to be about £470,000. The church has secured £89,000 from English Heritage, and the church has committed its reserves held for church repairs – £58,000.

A chance to look around though, and within the tower are three floors, all accessed by a typically narrow spiral staircase via a suitably small door on the outside of the tower. 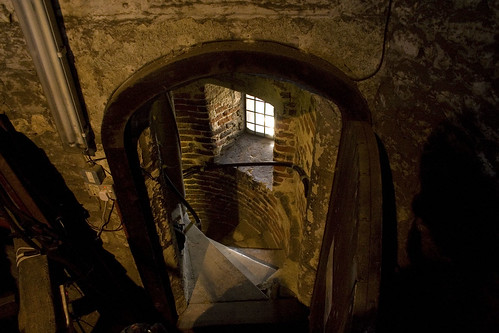 The first floor is the bell ringing room, where all ten bells can be rung, although a clever hook connection allows one bell to be rung from down inside the church. What seems like a spacious room is actually quite cramped when everyone is in there pulling on the ropes, and anyone not working has to sit on the side window ledges to keep out of the way. 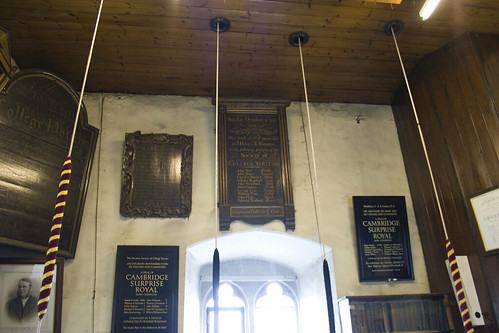 Directly above it sits the clock, which was still wound by hand at least once a day until sometime in the 1970s. Eddie, the Tower Captain and Fiona from the church weren’t too sure when and why the change took place, but like most church upgrades, it is usually prompted by the lack of replacements to do the job when the previous incumbent requires a funeral.

Local residents have probably learnt not to rely on the clock for overly accurate timekeeping. It was a few minutes out during my visit and needs regular adjustments. Being half way between the bell ringing room and the bells, the clock is surrounded by bell ropes running through small holes in the floor, to equally small counterparts in the roof above. 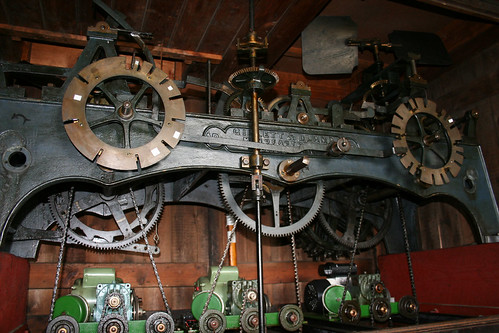 Finally up to the room that is causing all the problems to the church tower though – the bells and their 200 year old oak frame. The bells were all in their upright “set” position when I arrived, which actually worked out better photography wise as they were dropped down later and the photos don’t look half as good.

Each of the bells contains an inscription around the side – which you can read on this pdf file. 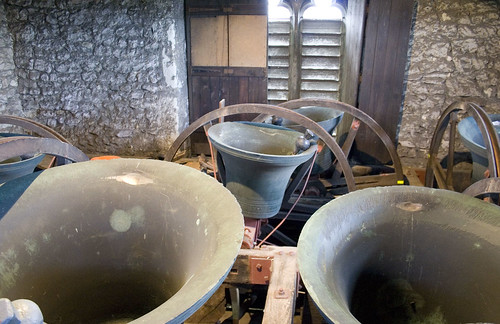 Yes, you can see right down to the floor below, and as we were standing on a small wooden ledge itself about three feet of the floor it felt a little precarious. 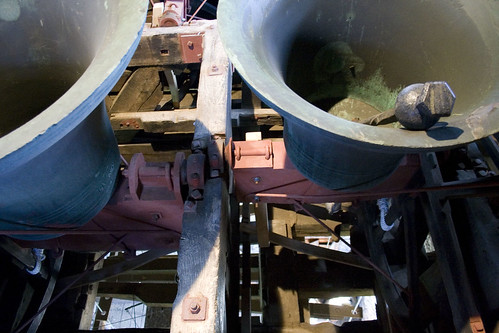 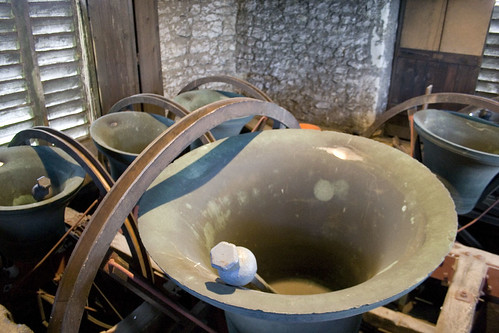 Providing they are able to raise the necessary funds, the bells will be lowered down to the ground through a series of trap doors in the middle of each of the floors below. The main bell has to go down first to create space, although it is just about possible to squeeze bells down around it if necessary.

The new metal frame they intend to install down below is also smaller so the bells will be given a new layout.

There was also a chance to go up to the roof of the tower. Here, the erosion of the 1960s mortar repairs are more evident, as is the splitting of stones which couldn’t flex with a proper lime mortar. Some rather ugly concrete blocks have been used to strengthen the upper parapets, although fortunately not visible from outside.

The lead roof needs repairs as well, but they suspect that’ll be a later job as repairing the splitting walls is a bit more important at the moment. 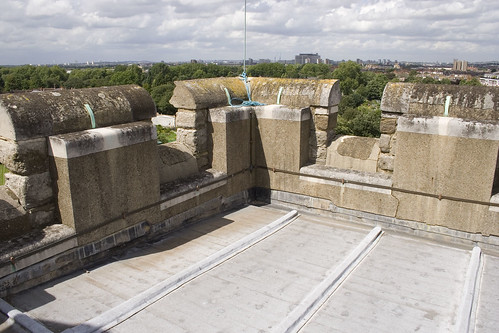 There’s some pretty good views from the top as well.

As mentioned, the Church is fund raising for the tower appeal, and donations can be made through JustGiving or by cheque and they have various fund raising activities, from humble village fetes to a posh dinner and dance in Fulham Palace.

Some more photos are here.

If you’re thinking the church tower looks familiar though – then this might be the reason.

Yes, it is the church from that famous scene in The Omen.

Thanks to Fiona and Eddie for the chance to go up the tower and see the bells, and the views. 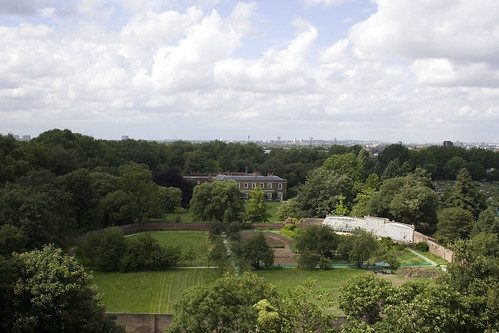