The Rhinebeck Panorama on Display inside the Rolls Buildings

Published 1 August 2012 by Events and Tours

Sitting deceptively hidden in an otherwise fairly bland office block down a narrow dead-end street you can find Rolls Buildings, which is said to be world’s largest commercial court

It’s actually an arm of the Royal Courts of Justice, and opened last December as part of a push to modernise the commercial court functions and boost London as a legal centre for international disputes.

Although the courts are not profit generating, their presence pulls in the various highly paid lawyers and lackeys who boost the UK economy and project the UK’s “soft power” overseas as a reliable legal base to work from.

The courts actually occupy just a small fraction of the building, which was originally supposed to be just an office block, but when the government was looking for a new court facility, the office block developers put in a bid to lease out space.

Winning the lease meant quite a bit of a refit – as the court needs its systems to be totally isolated from the rest of the building. They also have to think about courtly issues such as separating Judges from litigants.

What has been delivered — as I got to see today — is a utilitarian building that is polished, clean and very modern. But probably understandably has put function ahead of design. 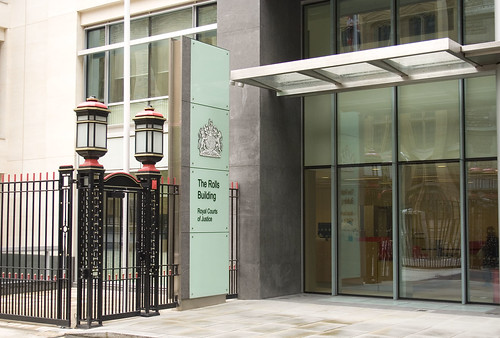 Sadly, photography inside the building is forbidden – it is a court after all.

The most dramatic aspect is a central atrium, which has a rather impressive spiral staircase running up to the 3rd floor. The Judges are based in the fourth floor, so the stairs don’t go up there, to maintain the separation.

The court rooms feel more like modern office rooms, with rows of clean functional desks, and very usefully — and often overlooked in offices — power sockets and computer connections on the desks themselves.

Interestingly, the IT facility allows litigants to bring their own computer servers into the building and install them in a rack, giving them direct access to their own computer files without the risk of accessing them over a remote internet connection.

In total the building has thirty-one courts, eleven hearing rooms and 52 consultation rooms. The layout is interesting. A central area for the public, surrounded by the courts and meeting rooms, and then around the outside, closest to the exterior wall, a thin corridor which the Judges use to move around in privacy.

The building itself is known as the Rolls Buildings — plural — as the short dead end road was lined with houses which inherited the name. In the 1920s, the Daily Mirror owned the plot for their printing press, which later caused problems with ink leaking into the soil. A replacement 1960s building was torn down in 2007 to allow the current occupant to be built.

For a building which deals with the richest of court cases, the public waiting areas reminded some more of an airport waiting lounge, or me of my local GP surgery. Very bland with plywood seating and limited vending machines drinks.

As it is a court, anyone is free to go in whenever the building is open and have a wander around the public areas, or even sit in the courts. I was here on an architect lead tour organised by the NLA.

However, there is another reason to have a visit to the building – the quite incredible, and very large, work of art in the main foyer. It’s before the security wall, so you are (according to security) free to just wander in and take a look – and take a photo. 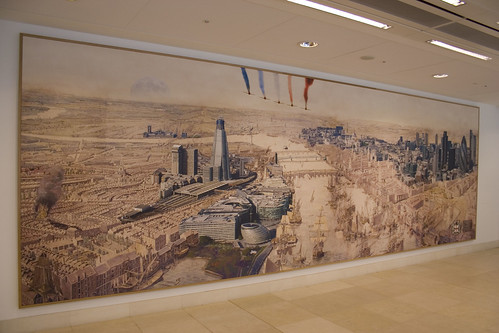 If you turn up when the building is closed, then you can still see it through the glass, but it’s worth going inside for a closer look as well (map link).

This is a modern interpretation of the famous Rhinebeck Panorama, and was commissioned by the Rolls Building Art & Education Trust, a charity which funded all the art work in the building. 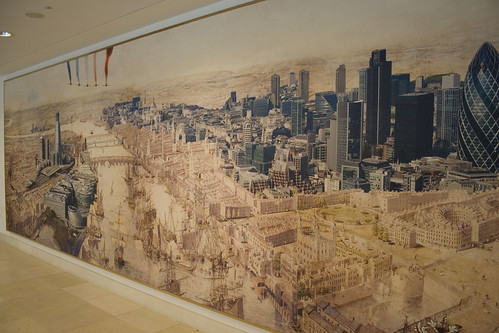