London’s Air Ambulance is marking its 25th birthday today, having launched its services on the 9th January 1989.

A charity, it was set up by the newspaper baron who ran the Daily Express, who was alarmed at how long it took a road based ambulance to come to his wife’s aid.

Baron Stevens of Ludgate’s wife, Lady Stevens died after choking on a peach. Stevens carried on with remarkable sang-froid but friends say that he grieved deeply. He could not get over the 25-minute delay of the ambulance while he tried to resuscitate her, and after her death he offered to finance a helicopter air ambulance in London.

The authorities were slow to accept and prevaricated about the funding. Stevens rang Mrs Thatcher and the offer was quickly taken up. For many years it carried the shield of the newspaper, but has since been sponsored by a number of organisations, and is more commonly seen in red now. 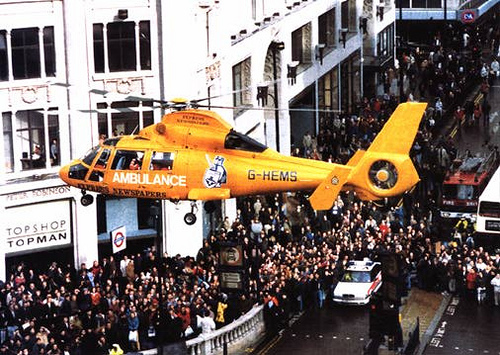 Now 25 years later, the air-ambulance says that it has treated over 30,000 patients.

Helicopters are an odd aerial vehicle in that they often drop into our midst in a way that — Harrier Jump Jet excepted — really isn’t possible for other aircraft and they get closer to us in an urban environment than we would usually expect to get to an aircraft, outside an airport.

A blob of red blood that descends from the skies into the crowded streets to deliver medical aid and scoot away skyward, often to rounds of applause from the crowds that have been held back for a few minutes by the police.

It’s an odd mix of curious fascination as the sight of this unusual object in the streets, admiration for how it can seemingly navigate its way down narrow spaces — and the respect for the work it does. 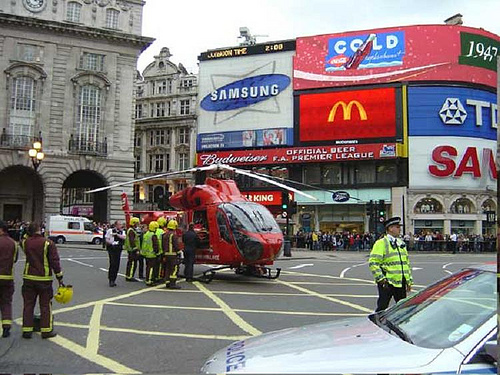 The service costs £2.25 million a year to run, and in its 25th year, they are fund-raising for a second helicopter and to recruit additional pilots and fire crew to extend daylight flying hours in the summer months.

Visit www.londonsairambulance.co.uk/donate to support the charity.