The 200th Anniversary of the London Underground

January 2063, and the God Emperor of the Known Londonverse descends into Tottenham Court Road tube station to unlock a box.

It’s the 200th anniversary of the London Underground, and Crossrail 3 is about to start carrying its first passengers. 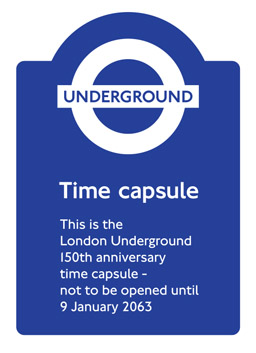 But first a task is to be performed, for 50 years ago, a box made from a signalling cabinet used by the old District Line (now the Southern Suburban Line) was filed with mementos of the 150th anniversary back in 2013 as a Time Capsule with instructions that is was not to be opened until 2063.

Following the Great Solar Flare of 2029, little digital information now survives about those times, so while we have a few newspaper reports, most of the internet coverage of that event has since been lost.

Down in the ticket hall, which has recently been refurbished to mark the 200th anniversary event, the God Emperor was presented with an old metal key — apparently these were very popular before biometrics — to unlock the case.

Revealed within was a letter from the then boss of the London Underground, something called an Oyster Card, a Baby badge and a book. A video file was also found, which we are told will be sent to computer specialists from the National Digital Recovery Centre to work out how to watch the film.

It turned out that the Oyster Card was a payment token from the days before ceiling mounted iris scanning of people walking into stations rendered it, and the old fashioned ticket barriers as redundant as ticket offices were apparently becoming at the time.

Tube trains were still in the era of individual carriages, instead of the walk-through design we consider essential today, and many lines still had an open access to the tracks. In our modern overcrowded network it is difficult to imagine the relaxed attitude to safety that people must have had back then as they stood precariously close to live railway tracks without anything to stop them falling onto them.

It appears that the ongoing debate about driverless trains was a major topic of contention at the time, as it is today, but the first of the Jubilee Line’s fully automated trains will be coming into action shortly, and finally the isolated cab at the front will be done away with. It’s been a long time coming, but even the old Barclays Light Railway was able to manage that feat before this time capsule was sealed.

Such fanciful visions of the future seem as quaint to us as doubtless the use of steam trains seemed to those who sealed the box back in 2013.

There is still pressure to recreate a steam train trip on the Underground as its original builders would have seen, but that is stuck with the bureaucrats trying to find a way around the Carbon Control Act that made burning coal illegal.

But pondering the other axis of the timeline, instead of the past, what will London’s transport look like in another 50 years, as the network marks its 250th anniversary. Will we be building the much needed Crossrail 4 line, or will the political dithering that has dogged its planning continue?

If Crossrail 4 to the Greater London suburb of Birmingham is not approved shortly, then all the effort that went into building the latest railway could be for naught if those skills and resources are lost.

The abolition of the Green Belt a decade ago finally allowed London to expand and had the much needed effect of lowering the cost of housing, but it has to be matched with a commensurate increase in railways from the edges to the growing financial office hubs at Heathrow, Croydon and Brighton.

As the unlocking of the Time Capsule was completed, the God Emperor placed inside replacement objects that will doubtless amuse her successor in 50 years time — a hologram video on a datacrystal, a series of e-book files, a report into the iris scanners than monitor passenger journeys and a collection of magnets from Crossrail 3’s maglev railway.

It would be lovely to know what our 22nd century successors think of technology from the 2060s.

Update: The computer specialists were able to recover the video file from 2013, which can be seen below.