Just over 100 years ago, a new bus company was started that promised to do away with the double evils of the horse drawn omnibuses and the noxious petrol based versions.

The London Electrobus Company was founded in 1906 with an initial fleet of 20 buses. But it closed just a few years later, not because the electric bus was a failure, but because the company was a variant of the 19th century railway scams — it was a fraud.

Which is a tragedy, as the technology, even 100 years ago was actually quite viable.

The batteries didn’t last an entire day, but as they were in a cradle underneath the bus, all that they had to do was drive onto an elevated ramp at lunchtime at the bus depot in Victoria, and the depleted batteries could be swapped over for fresh ones in just three minutes. 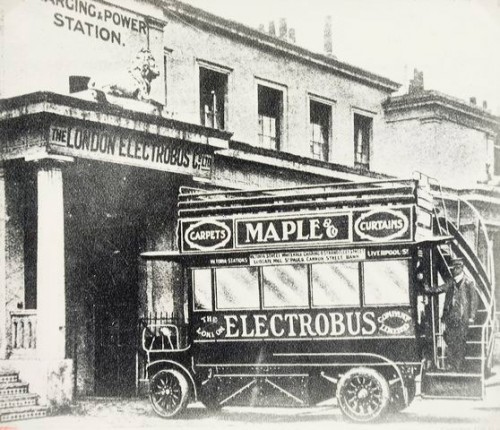 The buses were also said to be significantly more reliable than their petrol counterparts, and indeed at a time when a petrol bus would be lucky to last more than a year, the electric models managed to run for six years after the London company closed and they were sold to Brighton.

But why did the London company, which seemingly had a better product than the petrol bus fail? Fraud. Plain and simple, the company had been set up to scam people out of money, not to provide a bus service.

In April 1906, the company listed its shares on the stock market, raising £120,000. However, within days they had refunded £80,000 after doubts were raised about how the company was being run.

It seemed that they were paying a massive £20,000 for the rights to a patent that wasn’t needed, and the order for 50 electric buses was hugely overpriced. 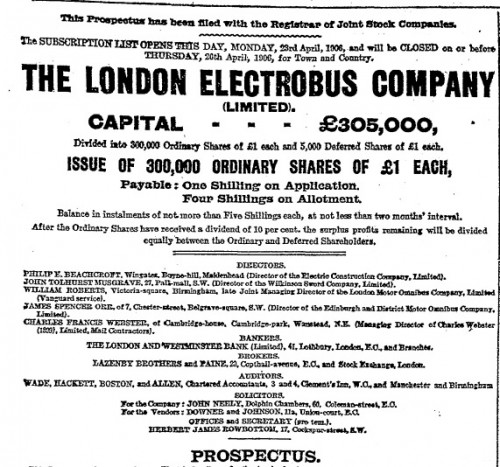 Just a month after the share issue, a court writ was issued to block the company spending any of the money it raised. The company limped on, but was fatally damaged by the controversy.

The order for 50 buses turned into just 20 delivered.

In April 1908, the company again tried to raise money on the stock market, but once burned, twice shy and investors did not take up the option.

The company still managed the occasional publicity stunt though — such as the rare permission to run buses through the Royal Parks in May 1908 as a day outing for 264 French sailors who had accompanied the French President on a state visit.

They also faced increasing competition from the other omnibus companies, who in May 1908 lowered their fares, forcing the Electrobus to introduce penny fares between Victoria Station and Marble Arch, and a tuppeny fare to Liverpool Street.

Still determined to win over the public and skeptical investors, they were also the first to experiment with a roof on the top deck of a bus that November. Until then, the top deck of buses had always been open to the elements, and most disagreeable.

The company managed to struggle on, and even extended its routes, but a new disaster was facing it — in the form of a notice from the Commissioner of the Metropolitan Police in April 1909 who wanted a ban on any road vehicle weighing more than 7½ tons. Fortunately, the police agreed to treat the batteries as fuel, in the same way as petrol was, and exempt it from the calculated dead weight of the vehicle. A reprieve!

However, throughout 1909 and 1910, the company faced a number of court cases from aggrieved investors, and in November 1910, a court case was heard into the fraud allegations.

Although the case was settled, it pretty much killed off the company.

The buses were sold to Brighton, where they ran until spare parts ran out in 1917. 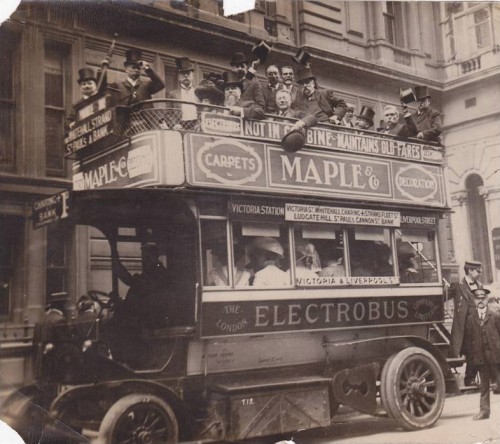 It is all too easy to speculate, but at the time, the electric bus was seen as cleaner and cheaper to run than the horse or petrol alternatives, so what might have been had the fraud not taken place?

It is possible that with increased demand for electric batteries that advances would have been made sooner than they otherwise did, and that lightweight batteries would have come onto the market, making the electric motor vehicle a common sight today.

Such advances would also have meant that personal electronics today could be a decade or two ahead of where they are in terms of battery performance.

…and I might be sitting here today writing a blog post about a short-lived experiment a hundred years ago that powered buses by the use of a strange little known liquid fuel called “petrol”.