Today marks the 150th anniversary of the grand — well, actually not so grand — opening of London Charing Cross railway station. 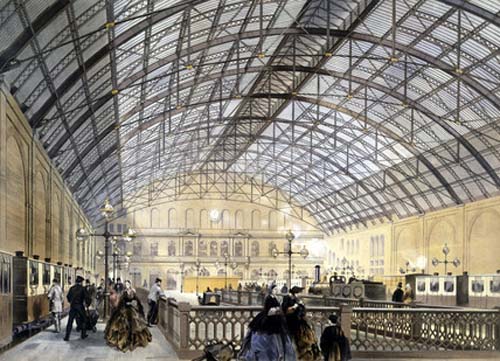 The Charing Cross line, although scarcely two miles from London Bridge, took nearly four years to build, running as it did, and still does, through some very densely built up parts of the city.

The line comprises of 17 bridges and 190 arches in total between Charing Cross and London Bridge, and although the Times newspaper describes some of the road bridges as some of the “ugliest ever yet put up by any engineer”, it liked the river bridge.

The first train to leave the new station of Charing Cross, which was still under construction at the time was the 7:10am to Greenwich on the 11th January 1864.

If there had been a train leaving Charing Cross at 7:10am this morning, you could have caught a train exactly 150 years after the first one. But there isn’t, so you can’t.

It wasn’t technically the first passenger train along that stretch of railway though — as the Royal Train had traveled from Windsor on the 14th December, and making use of a long since vanished link, was able to travel through Waterloo Station and over to the London Bridge line, thence down to Dover. Which was apparently very naughty as the railway wasn’t sanctioned for use yet, but who is going to tick off the Royal Family?

Royal naughtiness aside, the station itself was nearing completion when it opened, it sat on the site of the famous Hungerford Market, after which the bridge was named. However, the station was named after the Eleanor Cross that had stood near today’s Trafalgar Square in the hamlet of Charing.

I’ve not easily been able to find out why they renamed the station Charing Cross which was over 100 yards away, although I presume that naming the station after the market it replaced was seen as too down market?

The monument outside the Station today being a replica of what they think the original might have looked like. The original was torn down by the Puritans in 1647, and the stone rather ignominiously used to pave Whitehall. 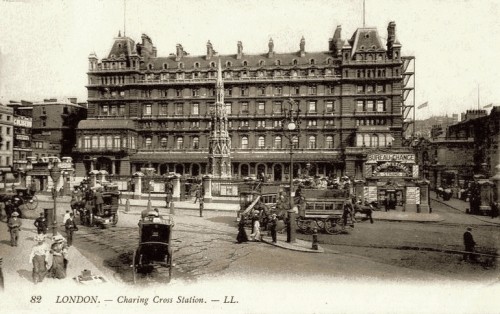 So, a new station for the railway. A few weeks later the building was finally finished, and the following year, the hotel that still sits in front was also finished, along with the Eleanor Cross in the car park.

The station has changed considerably since its construction though.

The first major change was not expected, and is now known as the Charing Cross Station Disaster when in December 1905 around 70 foot of the ceiling collapsed, bringing down the side wall and a glass windbreak at the open end.

Six people were killed in the collapse, and the numbers could have been higher if there hadn’t been about 15 minutes of warning that the collapse was expected following the breaking of a tie rod attached to the main beam.

The station was closed for three months to allow for the arched roof to be replaced with a flat girder structure, although that did give the company building what is today’s Northern Line an unexpected opportunity to take over the forecourt for its own station construction works. 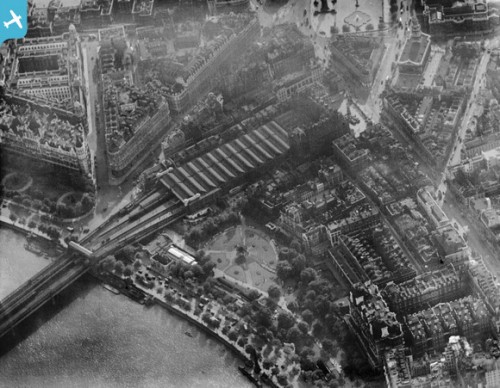 The station reopened in March 1906, but there were calls for the railway company to scrap the equivalent high arched roof at Cannon Street, which had a similar design. The British Architect magazine wrote that these “monstrous erections have always been an eyesore to London” adding that they “merely constitute monuments of the high flown vulgar ambitions of the engineers who designed them”.

They even suggested demolishing the stations and building them on the south side of the river, because commuters wouldn’t object to walking across a covered bridge. Well, excuse me!

The station though was largely unchanged until 1990 when the old roof was torn down, and a huge office block constructed over the station. In some aspects, the office block recalls the great arch of the original station, but I personally think it one of the uglier buildings of the period, although the inside looks rather better. 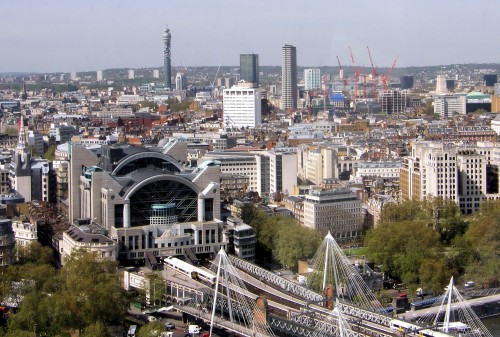 While the utility of having Charing Cross on the northern side of the river cannot be doubted, there was in fact attempts to demolish it in 1904 and move it to the southern side. The prime motives, according to The British Architect magazine (yes, them again) was to remove the railway bridge that “despoiled” the river.

When the railway bridge was built in the early 1860s, there were walkways on both sides, but the upstream one was lost when the bridge was widened in 1885 to accommodate more tracks.

Intriguingly the railway bridge incorporates the piers of an earlier suspension bridge of 1845 by the great Isambard Kingdom Brunel built to serve Hungerford fruit and vegetable market on the site of Charing Cross Station.

Failing to attract sufficient revenue from tolls, this was dismantled and the chains reused on Clifton Suspension Bridge. Brunel’s piers survived.

The northern one is now embedded in the Thames Embankment under Charing Cross Station but the southern (Surrey) one is still islanded in the river and was brought back into use.

I came across an intriguing sentence in a parliamentary paper a few months ago (which obviously I can’t find right now) which alluded to plans to double-deck the bridge and double the number of platforms. I’ve not come across any other reference to that since then, but it would have dramatically transformed the bridge and the station, and possibly done away with those irritating little delays as trains approach the station and then stop for a minute or two for a platform to be available.

However, stuck with the current structure, and in 1997, the existing two wide walkways were added to the structure. They almost didn’t happen due to concerns from London Underground about damage to its tunnels underneath, causing an urgent plea in August 2000 to secure an additional £19.5 million to cover the extra costs, bringing its total bill to an unexpected £50 million.

There was also a plan to open up an eight-meter wide brick vault as part of the works for exhibition space, but that sadly never happened, probably because of the aforementioned huge overrun in the cost of building the footbridges.

Although the new bridges are a wide expanse and amazingly crowded considering what used to be there, I still prefer the little dingy corridor that links the eastern walkway to the station itself.

I do wish they would put left/right corridors on the main footbridge though so that people don’t keep walking into each other! 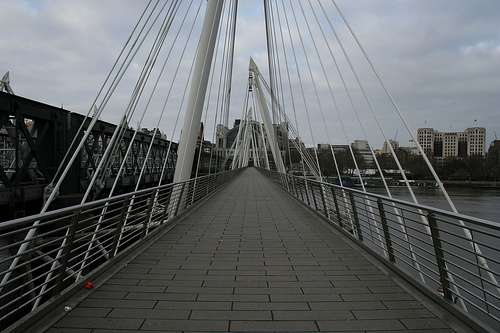 Also in 1999, the glass roof inside the passenger waiting area was replaced, and does look quite impressive if you spend any time looking upwards.

Despite that, and despite being a fairly major station, it has still managed to retain a somehow somewhat provincial run down feel about the interior. Built as a station, it now feels oddly as if the station is an afterthought to the hotel and office block that now engulfs it.

The disjointed way platforms 5 and 6 stick further into the station than the other platforms, and the huge ugly block that sits in the middle of the concourse do not help the effect. On the upside, the really quite appallingly awful station pub which had all the appeal of a British Rail sandwich, has finally been replaced with a venue that is actually worth a visit.