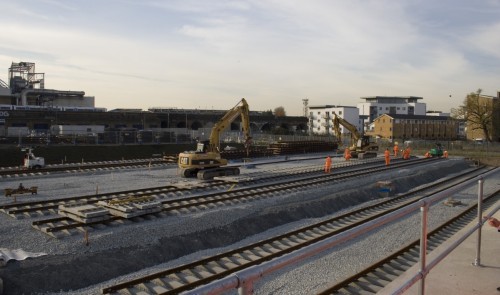 The tube at a standstill: why TfL stopped people walking up the escalators The Guardian

TfL’s proposals to demolish a former Tube depot and turn it into flats have been met with fury by the businesses using the space. Standard

Crossrail 2: Woking MP vows to fight for service to connect commuters to London Get Surrey

Crossrail has been hailed by Rail Minister Claire Perry for its role in attracting more women into engineering, Rail

Staff at Surbiton station told passengers they have no first aid training and asked what they should do when an elderly man collapsed on a packed train. Kingston Guardian

MPs and campaigners are ‘deeply concerned’ that the Department for Transport has buried a report which could have ‘undermined’ the case for HS2. GetWestLondon

A busy Croydon commuter train was late more than 80 per cent of the time on journeys last autumn, new figures show. Local Guardian

What became of the golden age of rail? The Engineer

A look at the new Whitechapel station entrance Diamond Geezer

The image above is from Dec 2013: A look around the London Overground upgrade project