Unlike the concrete eyesores that were put up in the 1970s such as the Westway and Hammersmith Flyover, this was to be built with pedestrians in mind — indeed, its entire purpose was to permit the pedestrianisation of Oxford Street.

Proposed by Bryan Avery — the architect who later designed the refurbished London Transport Museum — the plan was for a three lane elevated road to run the length of Oxford Street, about 2 stories above the street level.

Underneath would have been paved over and given to pedestrians, with escalators up to to the elevated street for bus stops and the like.

The scheme was estimated to cost £47 million (in 1982 prices) and some of the funding would have come from leasing out the new space under the road to smaller shops. Imagine a long line of food and coffee bars.

In addition, one of the architect’s trademarks, would have been a glass canopy between the road and the shops, effectively turning the entire of Oxford Street into an indoor shopping mall.

The elevated road would have dipped down to street level at Oxford Circus for the interchange, with pedestrians themselves being elevated over the road within a glass dome.

As Byran Avery said, “all the traffic could be accommodated exactly as existing whilst also increasing the pedestrians’ realm dramatically.” 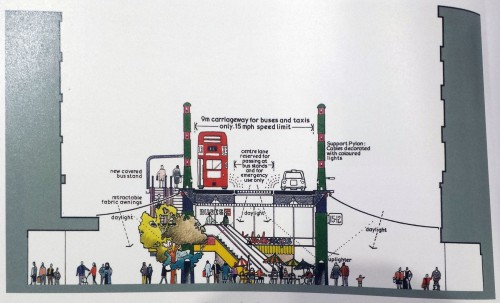 Initially welcomed by both the Oxford Street Association and Westminster Council, following a presentation, concerns were raised about the viability of the scheme.

One of the big arguments against it, apart from cost, was that it didn’t deal with road pollution. The doubts meant that without further financial support it wasn’t possible to expand on the concept into a fully fleshed out proposal, so it remains unbuilt.

Every decade or so, talks emerges of an attempt to pedestrianise Oxford Street.

Back in the 1960s, a report by Professor Sir Colin Buchanan suggested dropping the road slightly into a shallow depression, and raising the shopping level up by 20 feet.  The report also dismissed its own finding, noting that it was already too late for such a radical rebuilding of the street, and that banning the motor vehicle entirely may be the only solution.

Most recently, it was suggested that a light-rail, or tram could replace the traffic congestion on Oxford Street. Previous suggestions have included long travolators along the road, a monorail, or even an elevated walkway along the streets with entrances to the shops on the 2nd floor.

It’s probably a question of when rather than if, the notion of a pedestrianised Oxford Street ceases to be “Unbuilt London”, but what shape it will take is anyone’s guess.

Traffic in Towns: A Study of the Long Term Problems of Traffic in Urban Areas, Colin Buchanan