In the early days of the motorcar, architects were already looking to what would replace it as the popular transport of the upper classes, and obviously, private helicopters were to be the transport of choice.

For there to be skies full of helicopters, there need to be places to land, and preferably high up so the noise didn’t disturb the people below. Very high up. On stilts. 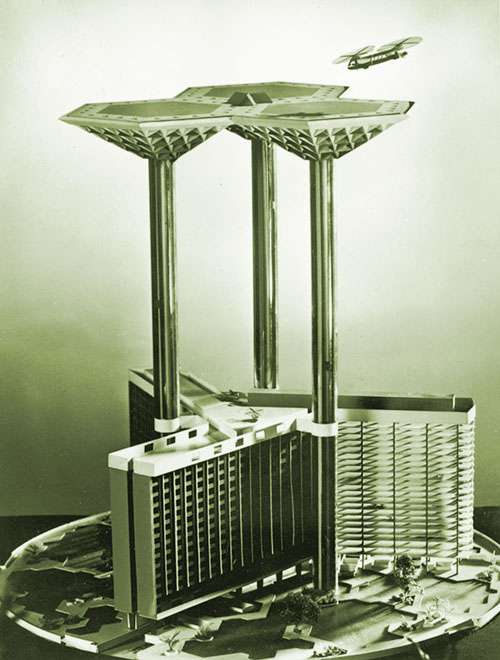 Designed by James Dartford for Pilkington’s Glass Age Development Committee it was part of a programme to show off how “the future” would look, specifically in the year 2000, but built using technologies available in the 1950s.

The intention was to build the new office block combo heliport near Waterloo Station, at St. George’s Circus. Helicopters would use the platform atop the three tall, glass-enclosed elevator shafts through which passengers and crew members would be carried from street level. Other features would be a sky-top restaurant with a far-reaching view of the city. The building below would house offices, hotels and garages.

In total the building would have been around 500 feet tall.

The three clover-leaf platforms would have been 120 feet in diameter, which was expected to provide enough space for 24 landings per hour, assuming 7 minutes of time per helicopter.

The reports of the time suggested that there would be several similar buildings around London offering inter-city transport for high flying businessmen. 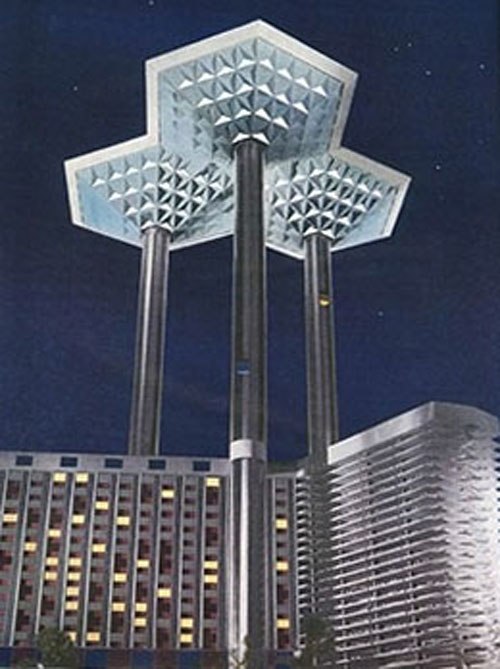 Of course, the flying car never arrived, so without a need for a collection of heliports in London, neither did Skyport One, or Two or Three, etc.

Architecture and Design For the Family in Britain, 1900-1970