Today, the land behind Paddington station is an array of glossy office blocks. But they shouldn’t be there. It’s supposed to be a 1960s array of housing towers.

Accepting that most housing towers of the 1960s were unmitigated disasters, the proposal offered was interesting in how it looked at the towers as a model town in the skies, with its own church at the top. 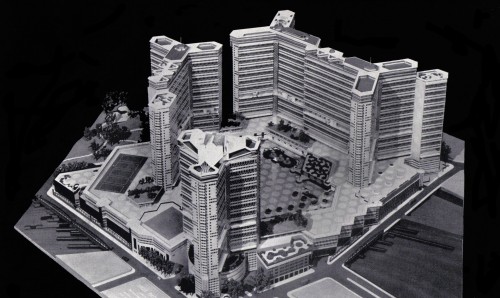 This was the 1952 plans by architect Sergei Kadleigh (of Barbican fame) assisted by Patrick Horsbrugh, called High Paddington — a town for 8,000 people.

The site was already occupied though, by the Paddington Goods Yard — for this was still the era of cargo deliveries to the centre of London by railway.

While the current office blocks occupy land that was railway, Kadleigh’s proposals would have floated above them. Making use of otherwise empty space in a manner that is increasingly being looked at again today. 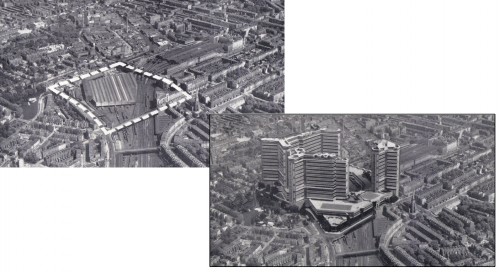 As is often the case, hindsight is a wonderful thing, and from a railway perspective, Kadleigh’s scheme would have been the better one. As it is, the Paddington Goods Yard closed in the early 1980s and has since been built over by the Paddington Waterside development.

Had Kadleigh’s High Paddington been built, then there is a reasonable chance that the railway siding would still be there underneath the towers, and offering considerable overflow capacity for the passenger station next door.

However, back to 1952, and Kadleigh showed off his scheme for a “town above the railway” to the Royal Society of Arts, and presented a model of the development.

The plan was for the three tower blocks to house 8,000 people on 20 acres of land, surrounded by 100 acres of open park. The intention was to show how its possible to deliver decent high density housing in a city without the urban sprawl that planners were concerned about at the time.

The podium would have contained several floors of offices and facilities, and then above that stood the towers and a public space.

The three towers would have risen to some 400 feet in the sky, and the tops would have sat some 500 feet above sea level — described at the time as “safety above London’s smoky pall”,  for the tops were not penthouses, but facilities for the residents of this urban town — schools and a church.

Kadleigh said at the time that his idea is that if we are to keep our open spaces’ and countryside, yet at the same time provide the thousands of new houses wanted today, “we must build vertically and not horizontally”. By putting up this building over a goods yard, he said that “it could accommodate thousands of people from neighboring slum dwellings which could, then be pulled down and redesigned properly”

However, his views of urban living in high-rise apartments were already starting to fade from fashion.

The trade magazine, Town Planning Review was particularly scathing, noting that the development suffered from architectural poverty and had a total disregard of the social and economic conditions prevalent at the time. They warned that if built, the “lowest existing standards of behaviour amongst the tenants would determine the character of the unit as a whole”.

A prescient opinion in light of what happened to many 1960s estates which were often sadly neglected by the councils that owned them and with people unwilling to adapt to the behavioural constraints imposed by high-density urban living.

But, the High Paddington was not to be, the railway kept using it despite dwindling demand, and eventually the land was derelict for much of the 1980s until a series of cancelled redevelopments lead to the current crop of office blocks.

Ark 16 : The Journal of the Royal College of Art