Although Tower Bridge is a permanent fixture on the list of things to visit eventually, it does also run a series of rotating displays to try and lure you in this year instead of some unknown date in the future.

Currently there are two displays — one in each of the two upper walkways.

The newest that opened a couple of weeks back is a nostalgia fest for persons of a certain age — images from the famous “This is London” children’s book with its distinctive drawings of London landmarks and short explanatory texts.

A sort of tourist guide for small kids.

London has changed somewhat since the books were published back in the 1960s, so the exhibition here has small corrections in places. 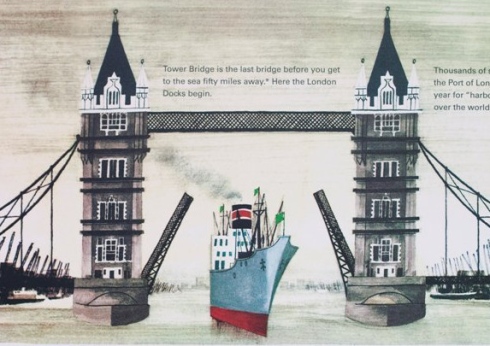 Of course, for any Londoner, the best fun to be had with any depiction of our city is picking holes in the drawings and texts.

Two clocks on the front of St Paul’s Cathedral? I don’t think so! The flag on the top of Victoria Tower refers to Parliament, not the Commons — and in fact since 2010, neither.

A couple of others which I’ll leave you to find.

The other display is more suitable for a Bridge though – and was opened last year with 20 photos and descriptions of “20 great bridges” from around the world. They are actually quite good photos, and the descriptive text is detailed enough to be interesting, without taking too long to read.

As each display is on a separate walkway, it is too easy to visit one and not realize the other exists.

I doubt anyone other than the most hardened of fans would visit the Bridge simply because Miroslav Sasek’s pictures are on display right now — but it might be the sort of thing that adds a bit extra to an already planned visit.

This year will also be the last chance to see the walkways in their historic state — as next year, planning permission permitted, they are to have a glass floor inserted in places so people can look down when Tower Bridge is opening.