The woman who could sell Time

In the early part of the 20th century, domestic clocks were still not hugely reliable and regular resetting was generally needed. People who owned a telegraph line or one of the modern radio could listen for the time pips, but there was one other way of getting your clocks to reset correctly – that was a visit from the travelling time lady.

Ruth Belville spent some 40 years setting an old watch to the exact time each Monday morning at the Greenwich Royal Observatory – and then she would travel around London carrying that precious watch and would visit clients to correct their clocks. She carried on doing this right up to 1939, and when she retired she still have 50 customers. She died four years later, just as domestic radios were finally becoming popular enough to have probably put her out of business anyway. 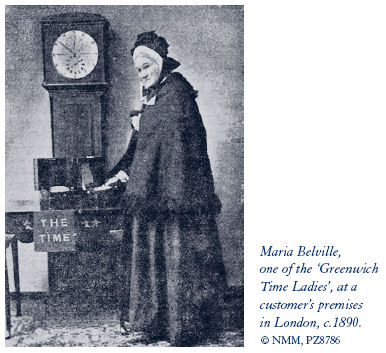 The service was actually started by Ruth’s father, John Belville, an Assistant at the Observatory in 1836 as part of the government service to deliver Time to offices around London – until his death in 1856. His widow, Maria Belville, then offered to continue the service as a private venture – a proposal which was accepted by the subscribers and Observatory management. Maria retired in 1892, handing over control of the business to their daughter, Ruth, who carried the same pocket chronometer round London each week until she retired.

The service could have collapsed at one point as Ruth’s service competed with the telegraph company which sold time signals to its subscribers. In one notorious episode, the Chairman of the Standard Time Company, St John Wynne gave a lecture which was picked up by the newspapers where he accused her service of being quaint, and as she was female could lure the male workers at the Observatory to carnal wickedness.

Naturally, the papers leapt on this story – which far from harming her service – the publicity actually did a lot of harm to the telegraph company as it was found to be less reliable than a little lady traveling around town with a pocket watch on her person.

Why am I writing about this? Well, I got an RSS feed alert of a lecture occurring in the Royal Society on 2nd May which will be given by David Rooney, Curator of Timekeeping at the National Maritime Museum, Greenwich – who is writing a book on the subject.

As an aside, before the advent of the railways in the UK, time was calculated locally and varied throughout the country. This however made calculating railway timetables almost impossible and hence the country slowly adopted a single time zone for the whole nation.

I was once told that the famous clock at Christ Church College in Oxford still strikes 9pm but at 9:05pm, which was the original Oxford Time.

You may also be interested in my visit to the World’s Oldest Clock Museum in the City of London a few months back.