Neo Georgian, Faux Georgian, Mock-Georgian, there’s probably more Not Really Georgian architecture around now than when the Georgian’s reigned, so that home to architecture, RIBA is taking a wry look at this ever popular style.

What is Georgian architecture though, is it a set of styles, or anything and everything built while the correct monarchs were on the throne?

Most of what we think of today as Georgian is strongly influenced by the great housing estates erected at the time, often cheaply for the aspiring middle classes, and slightly less cheaply for the aristocrats seeking a suitable home for visiting the cities.

So the cities, and London in particular are lined with row upon row of flat brick buildings, some with plaster slabs carved to look like stone, but most looking not unlike 10 Downing Street, simple brick darkened with pollution and age.

Despite that unpromising start, it’s a style that’s very aspirational today. Few could afford, to live in an actual Georgian house, so it’s become a favoured design for modern architects.

In some regards hankering back to a rose-tinted vision of the past, with women in the sitting room, men in the office, and servants in the basement.

Have you ever noticed how people never look back on the past accepting that for many of them, they would be the servants?

For this new exhibition, London based artist, Pablo Bronstein has created fifty new drawings of buildings constructed during the second half of the twentieth century in an ostensibly pseudo-Georgian style. 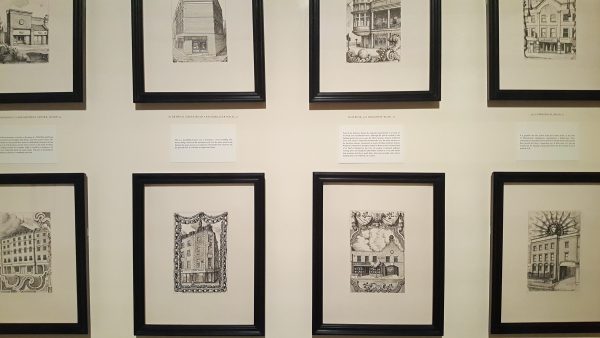 Many of them are a fusion of architectural and artistic drawings, with often some license taken with the surroundings.

The drawings are displayed in a space that has been laid out not unlike a Georgian home, with lots of modest size spaces and a couple of display rooms, with their classic curved walls and niches.

Unfortunately, so dominant is the style in modern lift that the effect sort of ends up looking like a mid-range hotel with prints on the walls between rooms, but that’s as much a damnation of the style than the exhibition.

What lifts the exhibition from being just rooms full of drawings though are the comments underneath some of them, offering often less than flattering observations about the modern pseudo-Georgian styles being attempted by the architects. 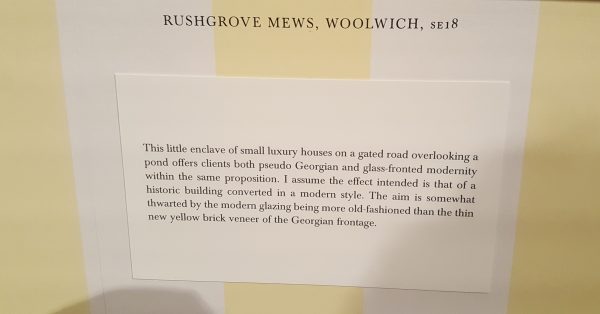 The exhibition is open until next February and is free to visit. It’s open daily 10am-5pm, with late openings every Tuesday until 8pm.