The British Library is not just a space for silent contemplation of worthy tomes, it’s also a huge collection of audio recordings, and some are now on “display”. The exhibition aims to show off the importance of sound in recording our cultural heritage, and the impact of radio in the 20th century. 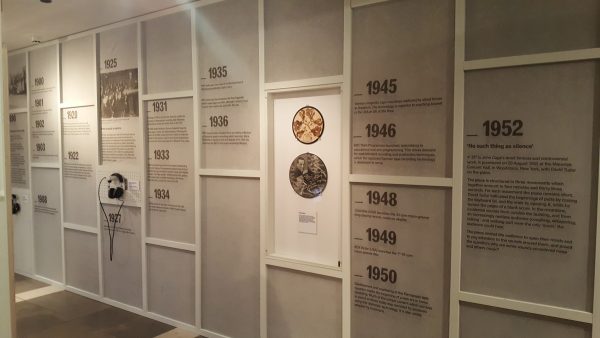 In addition to looking, you can also listen to a mix of sounds from the archive including a number of rare and previously unpublished recordings. In fact, the main wall is mostly comment boards and lots of headphones to listen to the sounds.

It’s a giant listening booth of the style that used to popularise record shops.

On display are also a record of James Joyce reading from Ulysses in 1924 (one of the rarest literary spoken word discs in the British Library’s collection and one of only two recordings of the voice of James Joyce), and the smallest 78 rpm disc ever issued, made for Queen Mary’s dolls’ house the same year.

Elsewhere, a rare 20-inch record that was used not for longer playing, but because they could project a much louder sound for use in halls. Never popular with halls, and even less so with the public, they died out very quickly. 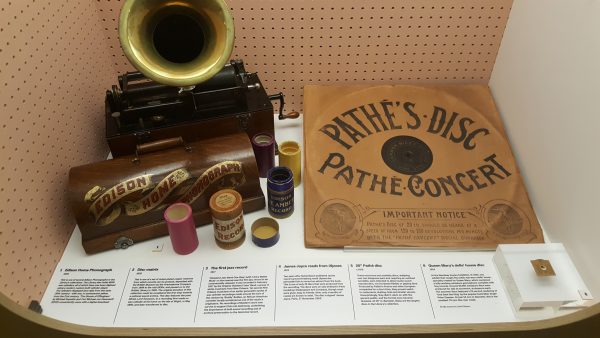 In a nod to copyright laws, look for the record sleeve with a note that it’s not related to Kodak films, evidence that protecting a brand name with lawyers isn’t a new thing.

As a whole, the display traces the history of recorded sound since the invention of the phonograph in 1877.

The exhibition is open in the British Library’s exhibition space behind the main reception desk until March 2018, and is free to visit.