A wooden pavillion appears in Stratford

A shallow wooden pavilion has appeared amongst Stratford's office blocks, a building that needed to be light enough to sit above a railway tunnel that was never designed to be built on.

The twisted red mass of tubes next to the Olympic Stadium that was supposed to be a local landmark is proving to be more of a millstone for the Queen Elizabeth Park.

A look inside the 42-story Stratford skyscraper

The tallest tower in Stratford is either slightly late, or very late, depending on how you calculate it.

A planned additional entrance to Stratford tube station next to the Jubilee line has secured additional funding from Newham council.

Fancy a visit the sky garden at the top of a 42-storey private residential tower in Stratford's Queen Elizabeth Park?

Just around the corner from the main shopping area in Stratford is an old building -- the Old Dispensary, and it's the oldest building in the town.

An ominous giant sphere could be coming to Stratford, and despite its apocalyptic appearance, it's actually a concert hall.

The Pigeons pub and hotel

Not a pub or hotel, and not for pigeons, but in Stratford is a grand old building that was once a pub and hotel for humans.

A majestic lion lays bestride a war memorial in a post-war housing estate, a memory of those who worked nearby and died far away. 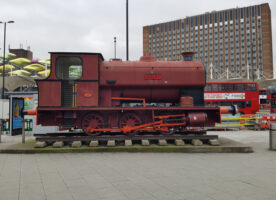 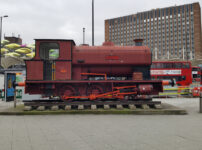 Have you met Robert the tank engine at Stratford?

When the mine closed in 1969, Robert said farewell to his friends and spent a happy retirement running up and down heritage railways. Pulling excited families along rural lines, it was a good retirement.

The parish marker of a Rotherhithe church – in Stratford

If you wander along that broad avenue of Tesco Value Dubai that is post-Olympics Stratford High Street, you might spy a relic from the deep past.

A new western side entrance to Stratford station has been approved, which will see easier access to the station from the side streets to the north of Stratford High Street.

In 1879, the Great Eastern Railway opened a new fruit and veg market at Stratford which gave its name to the local Stratford Market train station. Connected to the local railway, it had 12 sidings to service the market. In…

A garish smorgasbord of 2012 memorabilia in John Lewis

One of the so-called "anchor tenants" within the gargantuan shopping centre next to the Olympic Park is John Lewis, and they have set aside part of their new department store as a 2012 shop and viewing area.

The DLR extension is finally opening

Update 30th Aug 5:55am: Despite the TfL website showing trains running every few minutes as expected, the platforms at Canning Town are still sealed off and a DLR train attendant told me they are still testing the line. No idea…

Video of a Steam Train passing the Olympic Stadium

…or not as it happens. On Saturday morning, I headed over towards Stratford to catch a steam train passing through the area, and hopefully to get some photos or video of the train with the Olympic Stadium in the background.…

A museum for the Emergency Services?

Reading this morning that the hanger sized grey monolith that will become the media centre for the Olympic games in 2012 faces an uncertain future got me pondering an idea I had some time ago. On my visit to the…

The latest issue of the transport plans for the Olympic Park has been published. From a rail transport perspective, the key points: Stratford Station Stratford station passenger numbers are expected to double by 2016. The trebling of capacity and improving…