Organised by the The Institution of Engineering and Technology, photography within the depot was forbidden, we were advised to bring a passport/driving license, and entry was via a metal detector.

All that to look inside a big shed with some trains in it. 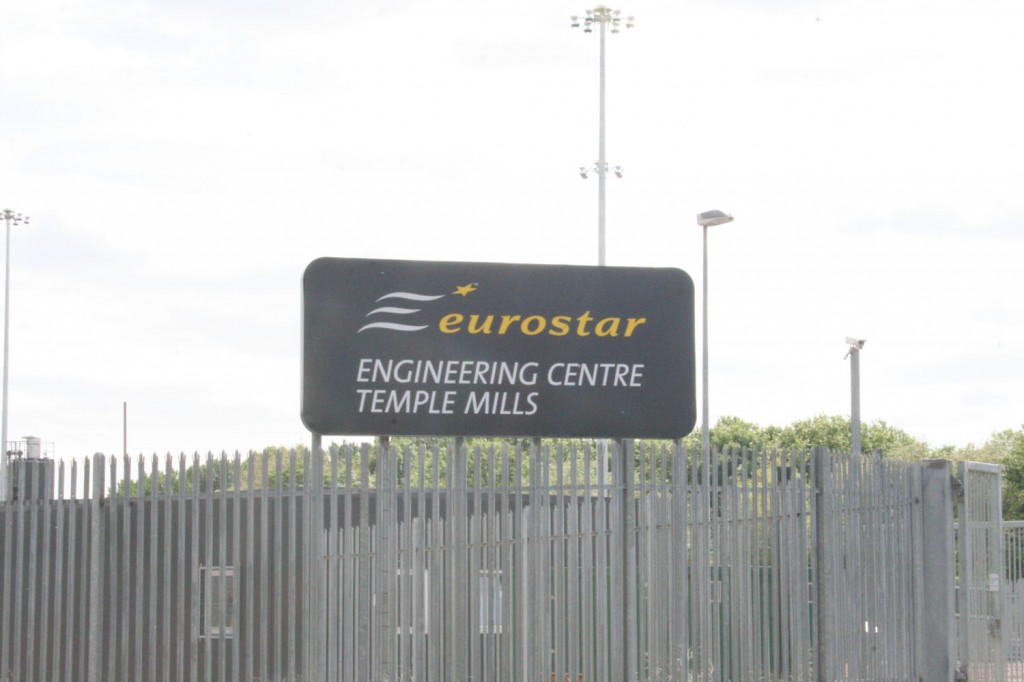 Incidentally, it is believed Temple Mills was so named because of some water mills in the area that were originally owned by the Knights Templar.

The old depot in West London was not ideal as the main sheds could only accommodate half of each train, resulting in a lot of time wastage as trains were split, sent into the shed on two separate tracks and then rejoined again after repairs. The new sheds at Temple Mills are now long enough to conceal an entire train so saving a lot of time for the repair works.

The older depot also had the disadvantage of requiring the trains to run along the North London Line, which is increasingly busy and not ideal for transporting big Eurostar trains, so they started looking elsewhere.

During the construction of the Straford International, a single track was installed in the middle to divert trains to Temple Mills, but this was originally for storage only – it was later that they decided to turn the space into the primary repair shed and scrap the North Pole Depot.

Alas, a single track at Stratford is a bit of a risk if something goes wrong, so they have replaced one problem (lack of shed space) with another (potential bottleneck on the tracks). Nothing is ever perfect.

So, it was to Temple Mills that I visited – and once through the security – the visit was a talk followed by a look around the sheds.

To be honest, there isn’t a huge amount to say about the sheds, other than they are sheds, with trains inside them. OK, it was interesting to get up close and see the Eurostar trains from below the usual platform height and the size of some of the engineering equipment in the bogie changing shed was impressive, but I doubt there was anything you wouldn’t expect to see.

Well, the pink bicycles were a bit different.

Not because the site is too big to walk around, but because staff can save a lot of time getting from one end of a train to the other by cycling – and they are bright pink to discourage, ahem, light fingered visitors wandering off with one.

However, having said the shed is a shed, the walk around was preceded by a presentation in the office about the issues Eurostar faces with its trains and the fairly unique working environment they face, which was really interesting.

To put it into perspective, a Eurostar train consumes about 12 megawatts of electricity for the engines, plus a further couple of megawatts to make the humans comfortable. They also have to work with SIX different signaling systems and THREE different voltages. Actually, it was four voltages until recently, and they still have all the equipment in place for the fourth supply.

They are therefore unusually complex trains compared to what most people might expect. The trains also work in a fairly wide range of temperatures and humidity. It is that range of weather that causes most of the problems with the trains, and the difficulty of replicating the weather on demand that makes it so difficult sometimes to work out why trains were suddenly dying inside the Chunnel during the infamous Dec 2009 shut-down.

Of course, it helps if the manufacturers don’t change components without warning anyone!

An example was – and to avoid getting the technical jargon wrong, I shall call it a “thingy” – that required a foam layer between a couple of the components. The manufacturer changed the type of foam, not realising that as it sat inside a vacuum, if the trains ran for an extended period at a specific temperature, then the new foam expanded more than expected and triggered an alarm.

A component that fails under very rare conditions – an engineering nightmare to fix.

Actually, I said the trains suddenly died in the tunnels during the Dec 2009 problem – actually the trains have quite a lot of backups, and it was a cascade of failures as the trains rode though the tunnels that eventually killed them. In actual fact, the trains were still working when they stopped, and it was only the sequence of failures taking out more and more of the engines that meant while some engines still worked, they lacked the necessary power to drive up the slope out of the tunnel. Another 20 minutes or so, and it doubtful that anyone would have even known the trains were suffering fairly catastrophic failures as they could have “limped” home once above ground.

To put it into context, you had trains, carrying road vehicles with a decent amount of snow on them, traveling from a very dry cold atmosphere into a tunnel that was about 30 degrees C warmer and thanks to all the melting snow, about as humid as Hong Kong on a bad day.

It was the moisture that was killing the engines – not the temperature change though.

OK – lets set aside the public relations disaster and the handling of the human side of the issue – and although I will say I have personally found them usually quite good – that was not their best week, and this was a talk about the engineering.

What basically happened, is that over the following six months, they almost sealed off the engines from the outside atmosphere and redesigned the air cooling systems so that it didn’t allow external damp air get into contact with the internal systems. There is a reason this wasn’t done originally – as it is a lot less efficient, and as the trains can run to the South of France during the summer months, really not a good way to cool very hot trains.

They survived the summer though – and the subsequent winter.

Internally though, they do look at how they handled the surge in traffic during the air-traffic shut-down last year due to volcanic ash as their “pay back moment”.

I wont quote the numbers as they use a different calculation method to the rest of the industry (and I’d probably get them wrong anyway), but a chart showing faults on the trains does show a noticeable decline over time – which is actually to be expected whenever totally new trains are developed and unforeseen problems are ironed out.

They are now getting to a point where there are fewer failures due to the ironing out of simple but repetitive bugs, although the ones that do occur now tend to be more serious and take longer to fix.

The various operating companies were merged into a single holding company last year, which will – eventually – tidy up the more political way the company was founded with separate divisions in three operating countries.

It is a legacy of that change that is now pulling more of the heavy duty engineering for the entire fleet to the Temple Mills Depot, although facilities have to be maintained in Belgium and France for local difficulties. The depot will also have to act as an on-demand repair center for Deutsche Bahn trains if/when they start running through the Chunnel.

There is also the half-life overhaul of the Eurostar trains to look forward to and the delivery of a fleet of new trains in a few years time.

It’s a pity I couldn’t go around the place snapping gazillions of photos as they probably would have been interesting, although there was an “official photographer”, but the photos haven’t been uploaded to the IET website yet.

However, there are some PR photos here, here, here and here.