In 1879, the Great Eastern Railway opened a new fruit and veg market at Stratford which gave its name to the local Stratford Market train station. Connected to the local railway, it had 12 sidings to service the market.

In the 1990s, the land once occupied by the market became earmarked to become entirely sidings, as the planned Jubilee Line Extension sought a depot for storage and maintenance of its shiny new trains.

This became the Stratford Market Depot in memory of its previous use, and earlier this week, the Institution of Mechanical Engineers arranged a look around the place. Situated between Stratford and West Ham stations, the depot is currently managed by Tube Lines on behalf of TfL.

At it’s simplest, the site can be divided into three segments, the outdoor sidings for train storage, the huge shed for maintenance work, and an office block which is also a training academy.

The academy is an addition to the original train depot, having been added in 2004-6. Made up of a number of utilitarian sheds, it is one which contains the most interesting physical layout on its ground floor – a number of sample train tracks configured for the different signalling systems used on the London Underground lines managed by Tube Lines.

It’s in this safer, and frankly a lot cleaner environment that the engineers learn their trade, with suitable train tunnel posters looming down on them. They train about 20 apprentices each year at the moment, and I got the impression that they are looking for more.

We may be in an office, but this is still a hi-vis area and treated as if it is a live track. 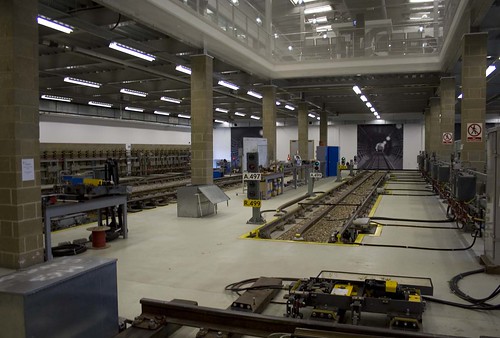 An interesting aspect of the new Jubilee Line signalling is that if the system breaks and can’t tell where the trains are by the usual method, there are now wheel counters installed along the track that count wheels passing over them to know when a train has passed. 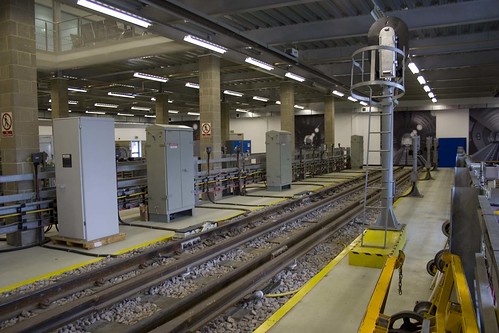 It’s also here that you can get to play with both the archaic electro-mechanical signalling systems, which clunk and click in a most gratifying manner, or the modern replacement, which is basically a computer server room.

For all the advantage that the computer based system has, I think I prefer the electro-mechanical system. I like to hear things click when I press buttons.

While the training centre is devoted to the signals, its the staff working in the big shed who look after the trains that are supposed to obey the signals, and that was the next port of call.

This single span arch is an award winning design, and the glass frontage offers loads of light into the main workspace. The opaque rear is a special sound-proof material, which it turned out is rather expensive to repair when a bit was broken recently.

Fortunately for architecture students, and staff working there, a metal walkway over the tracks runs along the front of the shed, and offers some great views of the roof, and obviously of the trains below. 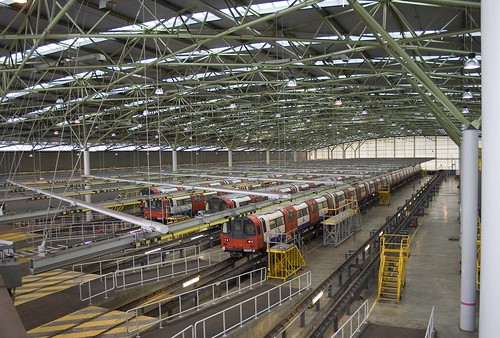 It may not look it, but the concrete floor is also quite special in a rather mundane sort of way. The site is next to the Channelsea River — now underground — and is made up of very soft soil which wouldn’t support foundations in the conventional sense. So the concrete floor “floats” on top of the marshy soil underneath.

The design also means that there is nowhere that pits could be dug down for under-train maintenance, so they came up with a novel solution.

The floor of the shed is about a metre below the tracks outside, so as trains come in, they roll onto elevated tracks, giving engineers plenty of space to work around them. The tracks are not live though – and trains are powered by a cable that plugs into one of the carriages, which also isolates the areas the engineers are working on to prevent accidents.

If necessary, they can also elevate the trains higher for works such as wheel grinding or bogie replacement. 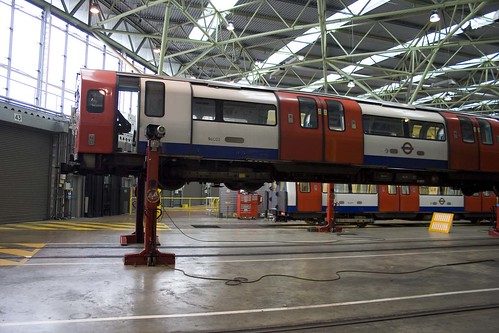 They can now replace a carriage bogie in the gap between rush-hours and get the train back into service for the evening peak, which surprised me at the speed the job can be done. In total there are 63 trains in the fleet, with 60 available for use at any time, and 57 actually on the lines at peak hours.

Maintenance of the trains was brought back in-house at Train Lines from Alstom last May.

The trains, at 15 years of age are now undergoing their first deep overhaul. Should have happened at year 9, but it turned out the trains lasted better than expected so the overhaul could be delayed. You might have noticed the sprung seats being replaced with harder versions – that is because the old seats tended to break, and were harder to clean following a Friday night drunken accident.

It’s subtle issues like that which have seen the train reliability improve from a fault per 10,000 miles to one per 43,000 miles. Fewer faults means fewer delays and less problems along the line.

Having commented on the difficulties with having a conventional pit in the floor, there is one place where they raised the floor up to create a pit – for a water jet cleaning system. Which sadly didn’t really work that well and they plan to convert the “road” to a normal service line shortly.

It is also next to that “pit” that two trains can be given their three-weekly deep clean. All trains are swept and dry mopped down daily, but a really deep clean in the depot takes place less often. 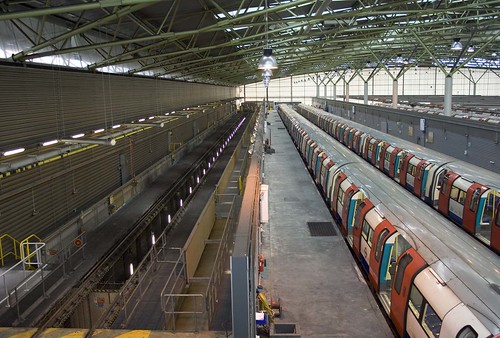 The shed is designed to be acoustically quiet as it is near a residential area, and it is also a depot where the normal sounding of train whistles is banned. Which also means they cant test train whistles for maintenance purposes here – so that presumably is done up at the Neasden depot.

A control cabin outside is managed by London Underground directly, and the patio at the back of it was covered in pot plants – it is an entrant in the annual Underground in Bloom competition.

Outside is the conventional sight of lots of train tracks for storing unused trains out of peak hours.

Underneath this outdoor train storage can be found the remains of the old Langthorne Abbey, which was covered over with concrete to protect the remains for another generation to dig up. Apparently there are catacombs under there!

I couldn’t resist this still-in-use road sign for trains next to the tube trains though. 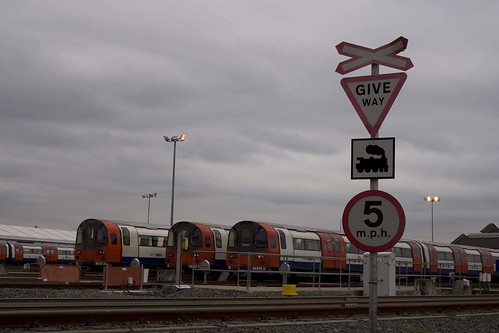 Thanks to Tube Lines and IMechE for the look around the depot.