Photos from inside the desolate Fortress Wapping

Published 17 July 2012 by By Ian Mansfield Events and Tours

A quarter of a century after the notorious union dispute which came about after some 5,000 staff were sacked when News International moved from Fleet Street to Wapping, the site is again to see a massive upheaval, as the 1980s buildings are swept away to form new housing.

Just a couple of months ago, News International sold the 15.16 acre site to St George for in the region of £150 million.

Fortress Wapping — a reference to both the heavy police presence needed during the height of the strike, and the massive Victorian dock walls that surround it — is to become Wapping Village, although the resulting buildings will probably be more city than village in density.

Today was a chance to have a quick look around the site with the new owners as they struggle to work out what to do with it. The site is an odd mix, with the 1980s behemoth of a building sitting next to the old dock site and the original dockside warehouses having been rather unsympathetically restored during the early occupation.

One of the warehouses has become the home for the now-mandatory public exhibitions to win over concerned locals and vocal heritage lobbies. This is a huge site though, and they do plan to be reasonably proactive in working with locals – which is in part why I was there today.

Having donned the necessary hat hats and high-vis jackets that even deserted building sites require, a small group trotted out and straight down into the basement underneath the old Victorian dock buildings. The building is held up on three arches, and while some have been bricked up to form rooms, one length  has been left open along the entire length of the building – an 800 foot long corridor of brick and stone.

Or at least it would be if they took out the occasional wooden doorway. 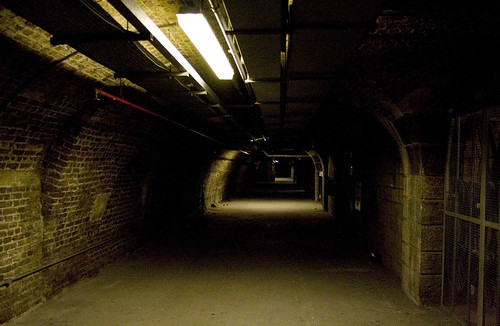 Although some of the walls have been covered in concrete or paintwashes, it enough is left down here to potentially create a really quite impressive row of small shops or offices. Quite what will happen is still to be decided, as they haven’t even hired an architect yet. However, there seems to be a keenness to do something interesting.

Certainly the 1980s gutting of the upper floors would never be permitted today. 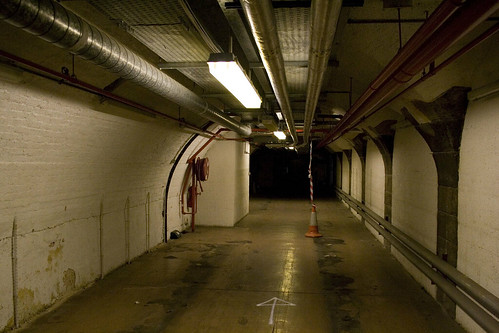 Emerging into the light again almost next to the army encampment that is Tobacco Dock, a quick look inside the massive printing floors. An area that would once have thundered with life now looking exceptionally desolate and fenced off. 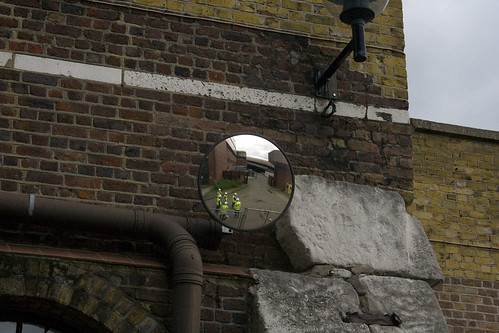 Most of the printing presses have been removed, although one remains. It’s not listed so might be removed later or possibly retained as part of the site heritage. What will certainly go though is the rest of the building.

Normally on a dock site, the lack of foundations is a problem and the marshy soil can need very deep piles to support the buildings. Here the problem could be the exact opposite – as the foundations for the print room are thought to be vast. Indeed, so vast as to be a potential problem in removing them.

Rumours of a million tons of steel may be a rumour. Maybe. 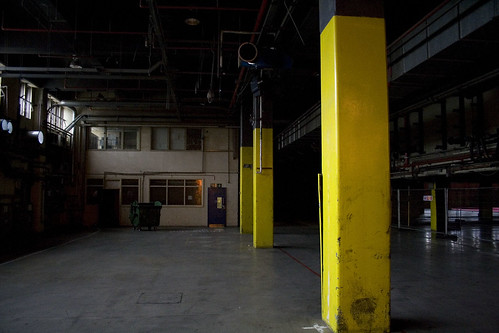 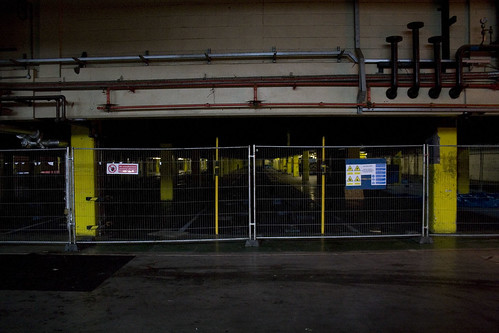 Since the printing presses went silent, replacement presses have been built elsewhere in the UK, a long way from the new offices next to St Katherine Dock where the journalists toil today and which became famous during the phone hacking scandal. While there is no reason why the printing presses need to be next to the journalists, it seems a nostalgic pity that the link was broken when the Wapping site closed.

I am also a bit wary of how former industrial sites are increasingly being converted into vast housing estates. Bustling twice a day as people leave and return from distant offices, these housing estates are often empty and soulless during the daytime. I’d prefer to see a bit more of a mix of light warehousing and residential housing at least.

But I am not a developer, so it’s not for me to say.

Back to the tour, and a chance to look around the offices once occupied by seekers of truth and justice, and the tabloid journalists. And James Murdoch.

Up the sixth floor via one of the remaining working lifts to where The Sun was put together and potentially the most garish wallpaper ever invented. Understandable, but imagine walking along a corridor like this every day. 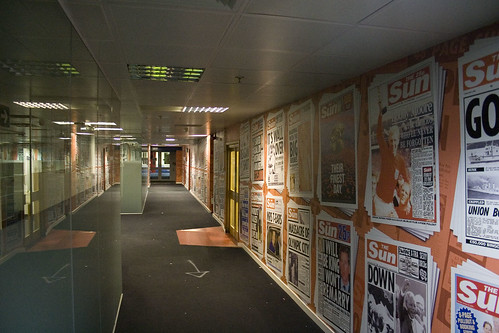 The executive offices where Rebekah Brooks worked. She had her walk-in wardrobe in the corner. James Murdoch worked next door in a slightly posher office – more notable for having a load of coving added to the ceiling. 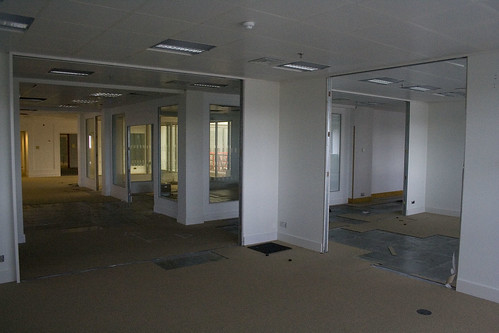 A chance to look out over South London from the lower roof area, which was the sort of gravel roof that would not really be permitted today – such space being more usually given over to large roof gardens. 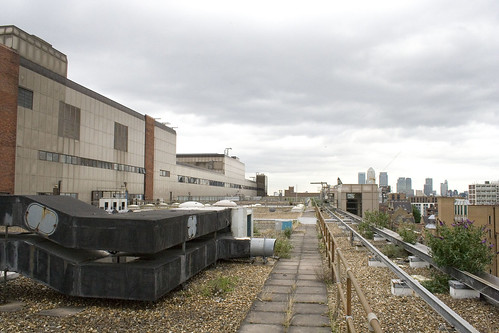 There was also a chance to take the executive lift down to the reception foyer. The translucent lift – which felt like it had aspired to an outdoor glass lift and fallen short of its aspirations. The foyer has a glass atrium with now long since withered plants discarding dead leaves over the short escalators.

We were told that the foyer was added by Piers Morgan, and it allegedly nearly cost him his job as Rupert Murdoch hated it. I side with Murdoch on this one, it looks like the sort of thing added to cheap light industrial buildings.

The dead plants were probably the most evocative thing I saw on the tour. Empty buildings can be temporarily empty, but long dead plants exude the atmosphere of desolation. 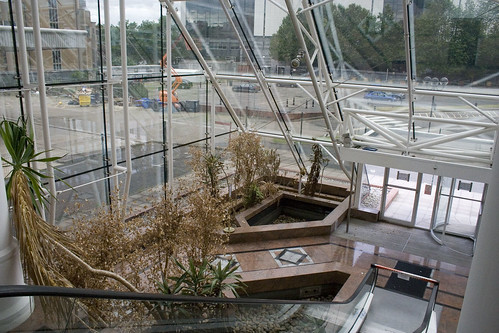 The 40 minute wander through the abandoned site was fascinating, and kudos to the housing company for letting people look inside before they really have anything much to say about their plans for the future.

Those plans will probably be announced around September time. Then expect the howls of protest about the architecture and heritage to really begin.

There also the issue of how the development will affect the eternally deserted Tobacco Dock shopping centre. The extra housing may finally make the site viable, or then again it might mean it becomes viable to rip out its 1980s “improvements” and do something else with the shell.

One other site which will be affected is the uninspiring office block just outside the Fortress, Times House. Squashed in between two housing blocks, it is going to be difficult to demolish due to party wall issues so they need to find something interesting with a dated building.

Good luck with that!