The venue has two cafes, one small tea&cake venue at the end of the main tour around the building, and another slightly grander affair right next to the main entrance.

It’s almost too easy to miss the larger cafe on the way out, for despite being next to the exit, and the cloakroom it doesn’t really protrude into the foyer in a way that might make it more noticeable. That it also comes after most people might have stopped at the smaller cafe on the lower floors probably doesn’t help in drumming up passing trade.

The cafe, as it’s not really a restaurant, has the look of a large kitchen with school canteen seating, but really is just a cleaned up cafe. A range of toasted sandwiches and cakes dominate the offering which is certainly aimed at the short visit.

I opted for the Andalucian, a vaguely Spanish sounding sandwich which naturally had to come with Chorizo, because nothing says Spain more than a couple of slices of that overwhelmingly popular sausage.

The cakes looked like generic mass production offerings with artisan price tags. I avoided them, as I usually do anyway. Being asked to pay more than three quid for a small slice of factory cake offends the sensibilities.

The toasted sandwich itself though was actually fairly nice. Toasted, but not to the point of being incinerated where the toast overwhelms the flavours.

However the tomatoes dominated and the chicken might as well have not existed had it not been for its physical texture. It was pleasant enough, light and not too heavy for a snack, but lacking the complexity of flavours that I had expected.

The coffee though. I am actually fairly keen on mild coffee, but this was mild to the point of being homeopathic. I think a coffee bean may have once glanced at its direction at some point, but that was about all that could be discerned. A fleeting memory of caffeine swallowed up in a luke-warm milky fluid.

It managed to wash away the flavours of the sandwich into a bland milky gloop.

Being served in a take-away paper cup did not improve matters.

Overall, it all seemed just too little and too insipid. 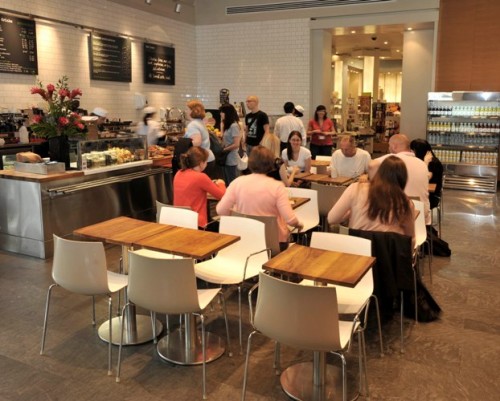 Summary: Overpriced and bland food makes for a poor end to a visit to one of London’s best museums.