London Underground has confirmed that plans are in place to start construction work on an extension of the Metropolitan line next year, with the aim of completing the new link in 2020.

The plans, which have been in development for nearly 20 years will see the Metropolitan line divert from its current terminus at Watford and run via two new stations to the more useful Watford Junction station, which is closer to the town centre, and better connected to other rail services.

The two new stations will be built at Cassiobridge and Watford Vicarage Road, and will be served by trains every ten minutes during peak hours. It’s expected that trains will run every 15 minutes off-peak, although that hasn’t been formalised yet. 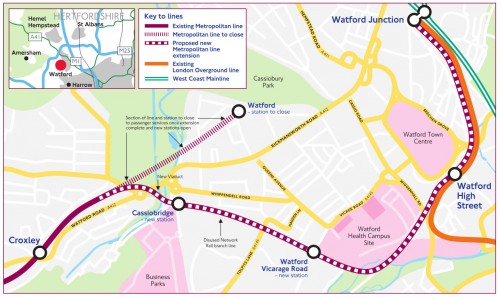 A full funding package for the extension has now been agreed between the Department for Transport (DfT), Hertfordshire County Council and TfL, and the work will be delivered by LU.

The funding for the railway has held up works, as it was originally projected to cost £120 million, but costs soared to £284 million. The funding package for the project now includes local funding of £125.35 million, DfT providing £109.82 million and TfL providing the remaining £49.23 million.

The valuation of the land, a car park and some former railway land was being disputed, and the latest funding figures suggest that TfL is picking up the costs anyway.

In addition, when the plan was originally approved back in 2011, it was expected that trains would start running next year. That was later pushed back to 2019, and now the latest deadline is 2020.

The delays to the project which was being run by Hertfordshire County Council (HCC) saw it being taken over by London Underground earlier this year to try and bring it back on schedule. That resulted in a necessary pause as the new team picked up the work, and construction had been expected to start by now.

Earlier this year, TfL said there was “very considerable risk associated with the December 2019 target delivery date,” so the new 2020 opening date is not unexpected.

Once finished, the existing Watford Station will close to passengers, but will be retained as sidings for the extended railway. I think we can also expect it to then gain a new life, as a convenient film location, and stopping point for the occasional Met steam train services.