Trafalgar Square’s a big empty space isn’t it? Surrounded by roads full of cars looking for somewhere to park. What a waste of space it is. Let’s turn it into a car park!

A multi-storey car park at that. 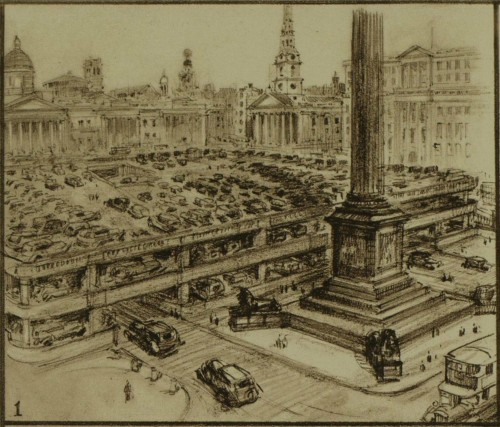 In 1935 Sir Charles Bressey was appointed by Hore-Belisha, Minister of Transport, to make a survey of the roads of Greater London and make recommendations of how to deal with the growing number of motor cars on the streets.

The report was finally published three years later, and offered a 30-year vision of how to rebuild London putting the motorist first. His plans were generally approved, but the inconvenience of a war got in the way, and the damage to London’s physically and fiscally meant that the plans were not resurrected after the war ended.

Although not directly implemented, right up the 1980s there was a general car-first approach in London, with ringways planned and some partially built until eventually, planners realised what a horrible mistake they were making.

But back to Trafalgar Square’s car park.

The image above crops up occasionally, as evidence of how crazy town planners can be, but in fact, it’s not what it is often claimed to be.

The drawing was published by the Illustrated London News in response to the Bressey Report, in order to rubbish the report.

The Trafalgar Square car park was never planned by Charles Bressey (that we know of), and the drawing was simply an exaggerated example of the “American” style of city that Bressey was proposing, with large roads and car parks.

The newspaper was generally aghast at the concept, and used its print distribution to pour scorn on the proposal.

So, the Trafalgar Square car park was never built, and as far as I can tell, was never even intended to be built.