In 1939, Punch magazine published cartoons about a fanciful railway, little realising that in the 1950s that fantasy railway would become reality and carry 2 million passengers.

The Far Tottering and Oyster Creek Branch Railway was a narrow gauge railway created by Rowland Emett for the 1951 Festival of Britain and was erected in Battersea Gardens. 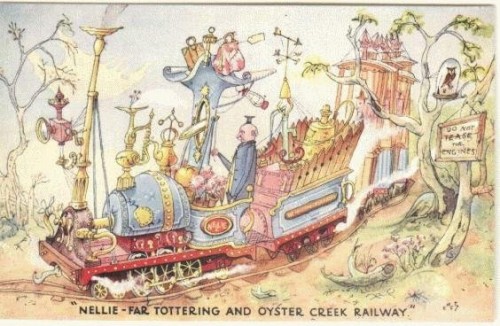 A whimsical view of British rural life and embodying his typical fanciful mechanics, it echoed the similar works of Heath Robinson and Rube Goldberg.

Three locomotives were constructed, Nellie, Neptune and Wild Goose. The two stations were as whimsical as the locomotives.

The line opened on the 11th May 1951, and as many of the other attractions in the park were still unfinished, the railway was an immediate hit with visitors looking for something to do. The queues were sometimes 50 deep waiting for a ride.

At the Times newspaper noted, the railway was watched by many people along the line, not all of whom obeyed the public notice which declares that “it is forbidden to tease the engines”.

On the entrance to the small tunnel, a sign warned “do not feed the bats”. 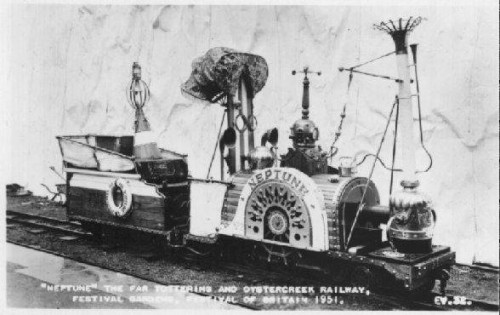 Sadly, the fun railway had a darker side, as it was also involved in a railway accident.

On the evening of July 11th, two trains collided on a section of single track. Mrs Mavis Roberts was killed, and thirteen other people were injured by the collision.

The cause of the accident was later found to be driver error, as one of the drivers forgot to check if the line was clear as usual.

The railway ran on the same site until 1953.

Although its life was short, it spawned a range of collectables, including this jigsaw puzzle.