Lancaster Bomber to fly over Central London on Thursday

Published 25 June 2012 by By Ian Mansfield Events and Tours

This coming Thursday (28th June 2012) lunchtime, the memorial to Bomber Command will be formally commissioned and as part of the ceremonies, a flypast by a Lancaster Bomber over Hyde Park Corner will take place.

The memorial itself is a large stone gate in Green Park by Hyde Park Corner (map), and the area will be sealed off for a large dedication ceremony for most of the day until 3:30pm.

The Dedication and Unveiling Ceremony will take place at 12 noon to 12:40 and will include a one minute silence.

After that, the Lancaster Bomber from the Battle of Britain Memorial Flight is due to fly over the location, and — weather permitting — drop several thousand poppies over the area in memory of the 55,573 people who died while serving in Bomber Command.

Not just a sombre memorial, but it should also be a spectacular sight to see the poppies falling from the sky with the distinctive and awesome roar of the bomber flying overhead.

It is unlikely that people will be able to get that close to see the poppy drop as the area will be sealed off, but I would expect views from Hyde Park corner or further up Picadilly would be possible.

The flypast route has been confirmed by the RAF as follows: 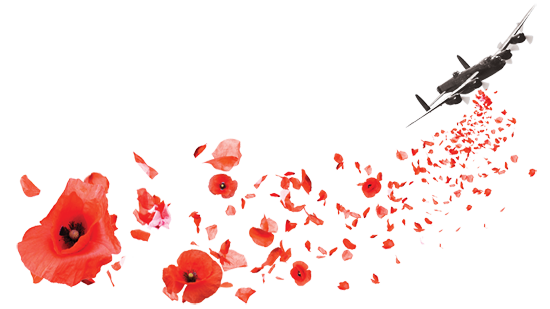