Sitting in a modern building in the achingly fashionable Bermondsey Street is the Fashion and Textile museum, a small space for displays and talks, and of course, the obligatory fashionable café.

A display that is currently on is devoted to the women who drove textile design in the post-war era, and helped to create the modern print fabrics industry at companies such as the Heals department store.

The greatest shock to post-war sensibilities was the move from designs largely dominated by floral prints to more abstract designs. Which was to become a clash of tastes in the 1980s with Habitat vs Laura Ashley. 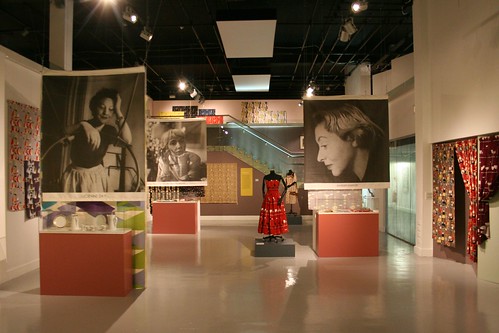 In fact, some of the designs shown in the display that date from the 1950s would not have looked out of place in my 1980s bedroom – especially on my duvet cover.

The main display is laid out with large wall hangings offering vast blocks of grand colour and design, and so much more impressive than looking at tiny swatches in a book. These are slabs of colour as they would have been seen in the house, as curtains, bedsheets and covers.

A few small glass cases show off contemporary magazines with reviews that are a bit too difficult to read when a spotlight is shining down on the glass. 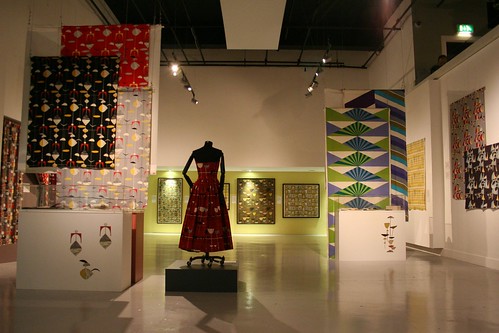 Going upstairs to more large blocks of colour, and another unrelated display lines the walls in what is usually a meeting room.

A collection of Vintage Handkerchiefs from the 1920s to 1950s.

A display board goes into a lot of history about the handkerchief and how it was used as a hidden language for those in the know. I didn’t know that dropping a handkerchief on the floor is to indicate a desire for friendship, while drawing it across the cheek signified love. They were also originally functionally mainly used for mopping the brow, not blowing the nose.

Handkerchiefs were also traditionally a safe gift between acquaintances – and certainly featured a bit too often when I was younger amongst my Christmas presents.

I was actually hoping to see plainer designs, but the ones here were just far too over the top for my tastes, and not even in a nice over the top sort of way, but far too fussy.

But that’s art and fashion for you.

The two displays are open until 16th June.

Entry is a frankly, rather expensive £7 for what is just two galleries. If you are very interested in design, or women’s history, then it might reward a visit.