Last week I had a chance to go back into the Connaught Tunnel – the Victorian railway tunnel that runs underneath two of London’s docks and will be part of the future Crossrail service.

As you may recall from my previous articles, two of the Docks have a water channel linking them, and a railway bridge was impractical, so the Victorian engineers built a cut/cover tunnel that runs underneath the short canal. Later used by the North London Line, it was mothballed in 2006, and is now being modernised for future Crossrail services. 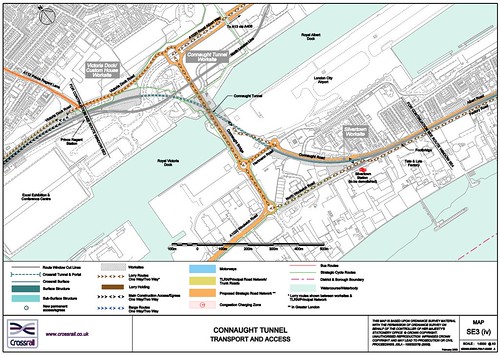 Although constructed in 1878, as boats above got ever larger, they started to scrape the top of the tunnel – and in 1935, the roof of the middle section was lowered and a new steel lined tunnel inserted into the space. This has to be removed as it is too small for Crossrail trains – and because the gap between steel and water has corroded away to such a degree that it is now quite unsafe.

Works on that will start next January when the canal above is sealed off, drained and the top exposed again to dig out the old tunnel and build its replacement.

I’ve been into the tunnel three times now – once just before it was handed over to Crossrail in April 2011, then again this February and again last week. One of the engineers said I have been inside more often than he has.

Although the route and photographic locations are not exactly the same, there is a chance to compare vaguely similar areas and see how work is progressing. 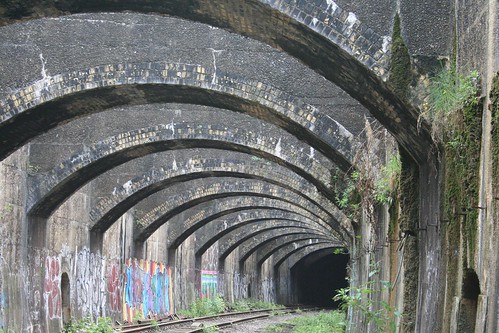 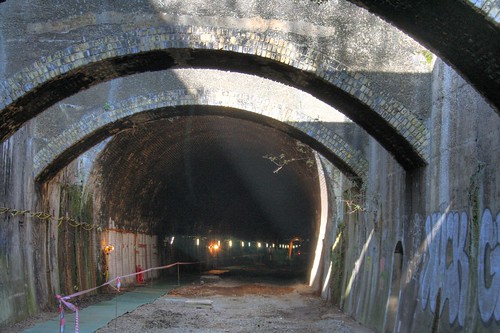 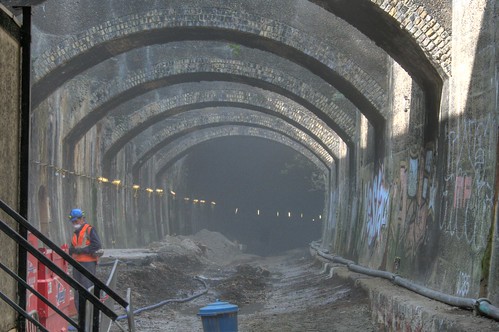 The main work has been to remove all hint of previous railway infrastructure and then dig down to remove the ballast and start preparing to underpin the tunnel as the floor needs to be lowered for the larger trains that will use it.

Walking down the slope into the tunnel on a dry day and the site looked like any reasonable building site, but as we got deeper down, the extent of water leaking into the tunnel became apparent, with a small torrent of water flooding down the centre of the curved base. Pumps working to drain out the tunnel were struggling in places – apparently one was being temperamental that morning — so wading through deep puddles was the order of the day.

One of the rare times I am please to wear waterproof building site boots.

Collecting emergency oxygen packs before heading in to the tunnels (yes, really!) and it is clear to my eyes how much ballast has been removed from the base of the tunnel as my shoulders were now roughly level with where the floor had been just a few months earlier. 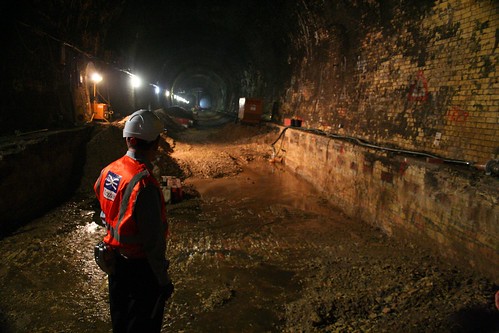 One thing I quite liked, from a purely aesthetic perspective is how the cutting down through the brick has exposed it in a manner that looks not that unlike a sedimentary rock formation. Sadly, Victorian bricks of this era are really not the best quality and they are going to have to be very careful when cleaning the bricks that will remain exposed in the tunnel as they have a thin surface finish that crumbles under modern pressure cleaning techniques. 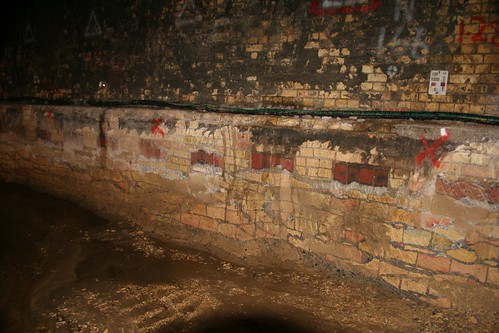 Last time I was here, we were only allowed a short distance into the tunnel, but this time it was all the way down to the inserts where the brick tunnel was replaced with steel linings – yes, steel, not iron. 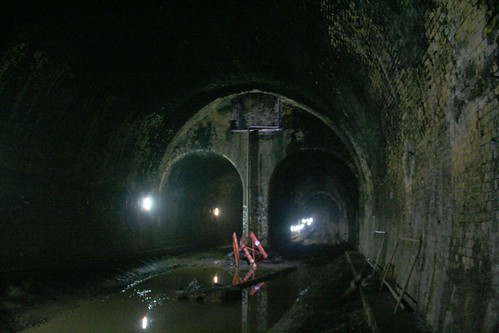 Not allowed to go deep into the steel inserts themselves, as works are still ongoing, but close enough to get some good photos of the structure that is to be removed. 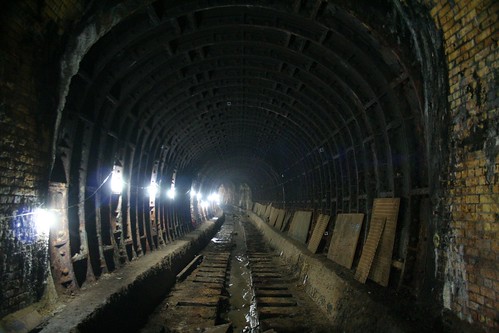 Back into the main tunnel to leave, and one thing which was visible in places were the quite lovely brick flooring that will have to be removed by the building works. I doubt the bricks are salvageable as they have been soaked for too long, but they made a pleasant tile effect as they peeked out from under the gravel and spoil heaps. 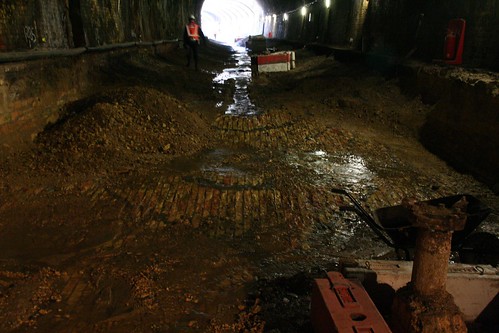 Works are also continuing above ground.

The old Silvertown station is to be removed in the next few weeks, and works will start on the pumping shaft I wrote about last week.

Further away, as the old railway runs towards Woolwich, loads of roadworks are being carried out at the moment to shift sewers and services in preparation for works to dig the sloping portal that will lead to a newly constructed tunnel under the Thames. 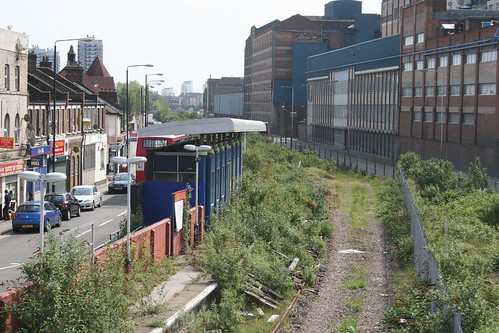 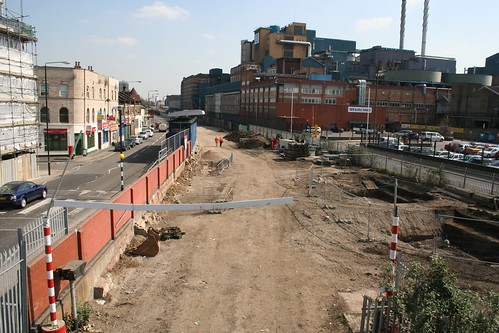 More photos from April 2011, Feb 2012 and last week’s visit. Thanks as usual to Crossrail and Vinci Construction for putting up with me.