Getting a free haircut in London

Published 27 May 2014 by By Ian Mansfield Miscellaneous

I have long heard about these free haircut deals where salons ask for “models” for their staff to train on, but what are they really like?

Well, I don’t know, as I am frankly scared of salons, preferring the humble simplicity of a barbers, so I was delighted to hear of the London School of Barbering, and they also want models to practice on.

I have the sort of hair that is a bit like a banana. Bananas are unripe for ages, ripe for 30 seconds, then they go off. I can get a hair cut, it looks OK for a week or two. Then on one day it is just right, then the following morning, a total mess.

Too short, it’s nice and tidy, but I look about 50 years old. The right length looks nice for about 30 seconds, then curls all over the place when I leave the house — and nothing seems to be able to correct that — and I have tried everything.

I am not a fan of having my hair cut for a number of reasons, but I think a lot of it boils down to sitting there watching activity going on and being essentially powerless to do anything about it.

A good cut is pleasing to look at, but there’s no personal satisfaction in having achieved it. I also seemed to have a problem with hairdressers cutting my ears almost every time when I was a child, leaving me in perpetual fear of the haircut.

I’ve tried lots of places and only once did someone come close to a decent haircut that I went home and nodded in approval at. But the venue itself was terrifying, because they were overly fussy about looking after me, and the hairdresser wanted to have a conversation.

Being slightly deaf and hairdressers being usually quite noisy venues makes a conversation very difficult if I don’t want to punctuate every other sentence with “pardon?”.

I watched one of those early morning interviews they have on the TV sofa a year or so ago, and this top hairdresser went on about how important the conversation was and how it is the hairdressers job to force the customer into talking.

Erm, no, some of us sit there in frozen terror at what is going on above our eyes and really want to be left alone to our thoughts.

I love a cut where I go in, snip snip snip, and out again in 15 minutes.

So, an hour long appointment at the LSB could well be the worst thing that could happen. But I am always up for an experience, so what’s the place like. 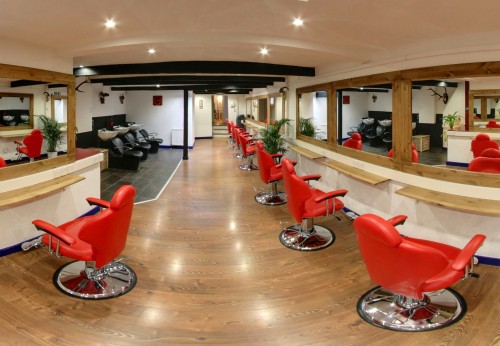 I booked an appointment, for 1pm, and an email to buzz a doorbell then wait in the lower floor doesn’t feel that reassuring. However, the door was open and it’s just a trot up a narrow flight of stairs to a room overflowing with men waiting for a cut.

This was unexpected. I had sort of imagined that this would be a low key operation with a few trainees and a few models, but no, it was more of an industrial process with a huge room packed full of students learning the barbering skills.

I had no idea there was such demand for trainees, and such a supply of men wanting a free haircut.

Although an appointment was booked, it is more akin to a normal barbers where you turn up and join the waiting queue. And eventually, I was handed over to Mathew.

He’s been here for eight weeks now, so I am not sure quite what happens if you get a first week trainee, but I presume the end effect might be less, ahem, qualified.

I’ve also never had so much attention paid to a cut before. Practically every hair was checked and rechecked, combed, cut, snipped and trimmed. He apologized for not chatting as he was being told to speed up his technique.

A heart leapt for joy. A silent barber! What rare joy is this.

Half an hour under the clipper and barely half way through the process, off to the wash, and a bit of a chat. He seemed surprised that this was my first visit. They seem to have a lot of regulars, and frankly, if the cut is decent enough, and free, then why not.

An hour for an appointment seems like a long time, for a man at least, but when I factor in the unreliability of just wandering into a normal place and maybe getting a cut then, or a half hour wait for a cut, it’s not that significant a difference.

The rest of the cut was done with the scissors, and again an exceptional amount of care was taken over every tiny bit. As a student they are judged on skills, so that is the “price” the model has to pay — to sit there as more care than you might get elsewhere is taken.

Indeed, I have never had someone spend an hour cutting my hair before. Sometimes a cut would be interrupted by the roaming teachers coming over to chastise, or praise. My own cut was presented for inspection, and the teacher instantly pulled out the scissors and corrected some mistakes.

Mistakes I would personally have never noticed, but the reasoning was sound, and I learned a few things about my own hair today. The teacher had two students for a moment.

I presume it’s a good cut, it seems decent enough. I am no expert. Actually, if the cut isn’t that good, then most of us men probably wouldn’t know anyway, although I presume the teachers would step in to prevent a disaster occurring on their watch.

However, it was actually quite a pleasant experience. I think I quite enjoyed it, which is quite something for me when having a haircut. An hour was not too onerous for this barber-phobic chap, and yes, I probably will go back for repeat visits, and I can then use the money saved to treat myself to a really good barber and shave later.

I think we should pay occasionally, as these trainees will need paying customers when they themselves go out to seek a wage.

Maybe my next visit will be terrifying, who knows, but hopefully not.

Men can book a free haircut at the London School of Barbering here. The cuts are free, but there is a tip box for each trainee if you want to drop some coins of thanks their way.

The only downside is that the place is only open weekdays, although they do open late on Mon & Tues if a mid-week appointment is difficult to take time off work for.