Published 6 October 2010 by By Ian Mansfield Events and Tours

How can you get young people interested in science? Show them a board full of formula, or display things going BANG and SMELLING a lot?

Actually, I think the question applies to adults as well, and last night UCL’s Chemistry department hosted an event to show off the more fun side of science. The room was half full of university students, and about a quarter full of potential university students along with their parents.

Starting off with a conventional bubble blower, the host for the evening asked why is it that a balding adult blowing bubbles is looked as as slightly weird, but a child doing exactly the same thing is a sight of joy? As it happens, bubbles were a topic of considerable scientific debate in the 19th century, and what we often think of as just a bit of fun are a fundamental component in our everyday lives.

A few displays of bubbles with an overhead projector, and a couple of the kids in front of me were looking decidedly bored – but they woke up very quickly when we moved onto filling soap bubbles with domestic gas and popping them with a lighted stick. They certainly woke up when domestic gas was replaced with hydrogen gas, and after several desperate attempts to catch one, he finally popped a bubble with a loud crack and ball of flame. 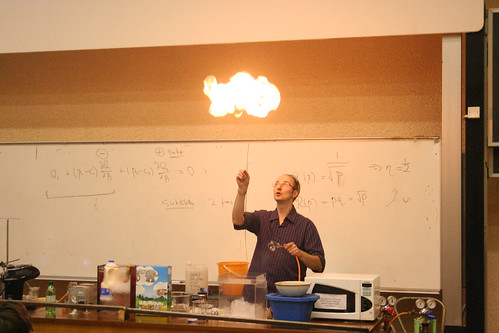 A final display of blowing bubbles involved filling a glass box with CO2 gas and blowing bubbles into it – and rather than sinking as soap bubbles would normally do, they floated in the sea of dense invisible gas.

A diversion into how a hot milk steamer works in the coffee shop was actually quite interesting as it turns out the hot steam blasted into the milk is NOT what makes it go frothy. The steam heats the milk, but the way the nozzle is designed draws in considerably more air from the sides of the nozzle and down into the milk, and it is that which then froths the milk.

The same technique is used by things such as inflatable airbags and aircraft escape chutes as they can use a small amount of pressurised air to inflate a large space, by sucking in a large amount of surrounding air as well. Technically, known as the Venturi effect.

No display of bangs and explosions in science can be complete without a Coke/Mentos explosion, and last night did not disappoint. Tip: use diet coke as it is easier to clean up. Second tip: Don’t do the experiment indoors, unless you want a permanent stain on the ceiling – as they have at UCL in another auditorium.

One other lesson learnt was that if you want to demonstrate a foam based fire extinguisher putting out a strip of fire – check that there isn’t anything flammable on the floor underneath, and that the fire extinguisher actually works. 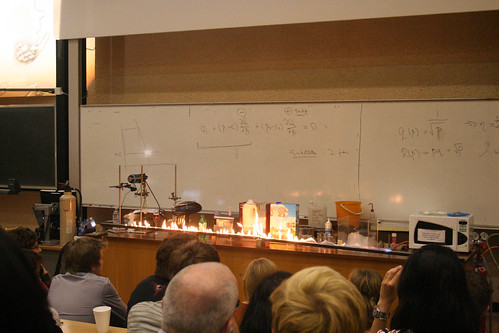 Fortunately, a CO2 extinguisher was nearby to rescue the room before things got out of hand.

Undaunted though, using an oxy-acetylene torch, he created a foam in a bowl made up largely of bubbles filled with gas. Gingerly holding a heated stick he threw it into the bowl, and nothing happened. Oh! A second attempt was far more successful and along with a loud BANG, a huge ball of flame rose up from the bowl. 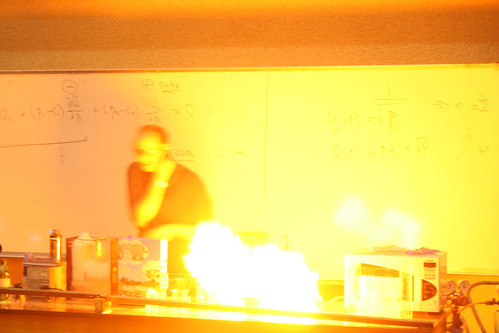 Finishing off with a large kids toy that creates huge soap bubbles, he pointed out that you can get the same effect with some string and a stick. A declaration that caused the two kids in front to deliver the universal message of “I WANT” in the form of two huge grins and four wide eyes at their dad. I think the message was received.

It was also quite nice to see that to the kids, a gaudy plastic toy was interesting, but the idea of playing with a bit of string and a stick was exciting.