Beefeaters Beating the Bounds at the Tower of London

Published 3 June 2011 by By Ian Mansfield Events and Tours

In the year of our Lord, 1698, a most riotous assembly did muster by the walls of His Majesties Royal Palace and Fortress of London, and protested in most vile manners at the disputed boundary betwixt the Tower and All Hallows parish church within the City of London.

Occurring every third year, the Yeoman Warders (Beefeaters) and some local school children and Scout groups carry out the Beating the Bounds ceremony where they progress around the edges of the Tower of London Liberties – the boundaries that marked the land outside the Tower but under its control – and whip the iron markers that mark that ancient border.

The Liberties – which rumour suggests marked the distance an arrow could be fired from the Tower walls – were expanded in 1686 in letters patent granted by King James II, and it is possible that seizure of land by The Crown was the cause of the riots eight years later that we now commemorate – although no one seems sure.

While bystanders and photographers congregated outside the Tower for the event to start, I was given the rare pleasure of being allowed inside the Tower after it closed to visitors for this early private part of the ceremony. 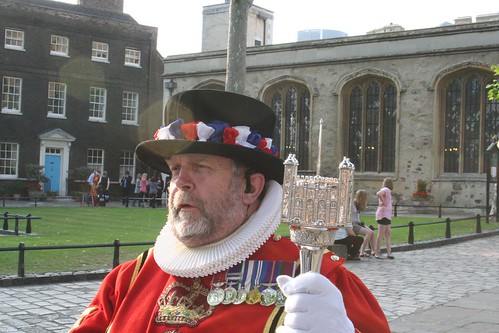 Inside, the procession of Beefeaters, scouts, clergy and various connected families attend a service in the Church within the Tower, and then formed up to march around the White Tower – probably more to avoid the stone stairs than for any ceremonial purpose – before heading out through the main entrance to the bemusement of bystanders and the delight of those who knew what was going on. 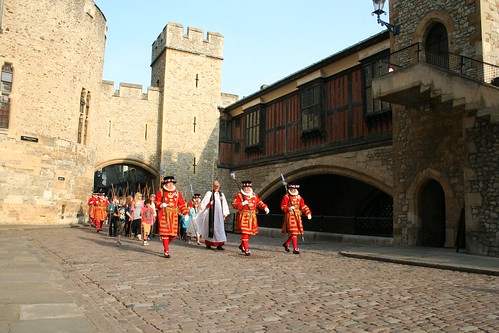 As with a lot of City of London ceremonies, it is still a random delight to be in an area when all of a sudden people in fancy dress of the City’s Livery companies, or in this case Yeoman Warders suddenly appear to carry out some ancient ritual or other. 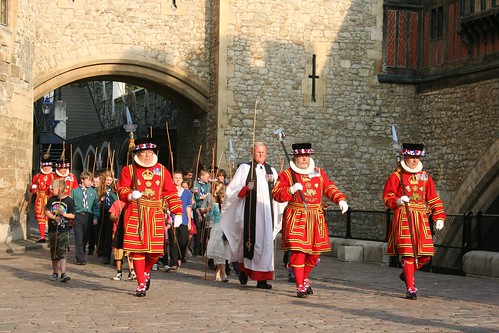 Leaving the Tower itself, we joined the larger throng of photographers – and four of the children were taken to the boundary marker next to the river – currently just a painted sign on the building site – and with a cry from the Yeoman Warder – thrashed the sign with their willow sticks. 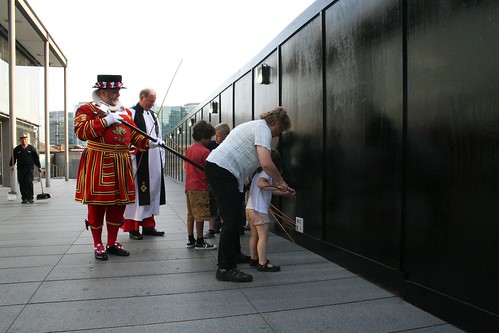 Beating the Marker – currently a temporary sign on the building site wall.

This was repeated a few times along the building site where Boundary Markers are still visible (including the one stuck behind a wheely bin), then with a parade up the hill, the mace was swung to point at where a marker used to be and a yell from the crowd verbally beat the marker into submission. 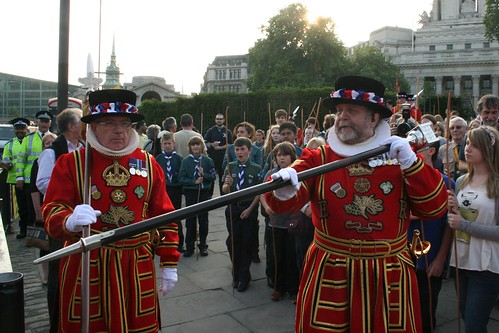 Having processed around some of the boundary markers, then there is a confrontation at the boundary that caused so much fuss in the middle-ages, and as the Tower team approached the waiting team from All Hallows, there were boos and hisses from the waiting crowd.

Here the parish priest from All Hallows and the head of the Tower expressed pleasantries, promises of peaceful coexistence and a desire not to return to the riots of the past.  Then, with hats removed, they called upon God to do the Saving the Queen thing again. 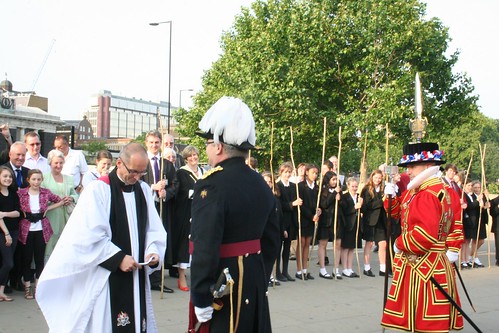 Peace declared, it is time to head around the rest of the boundary, which runs around the streets to the North of the Tower and past Tower Gateway DLR station – then down towards Tower Bridge – and give the markers a good thrashing with the willow sticks.

Some of the markers are metal plaques in the wall, a few are in the middle of the road – and one is inside a building that now sits right on top of the former border. 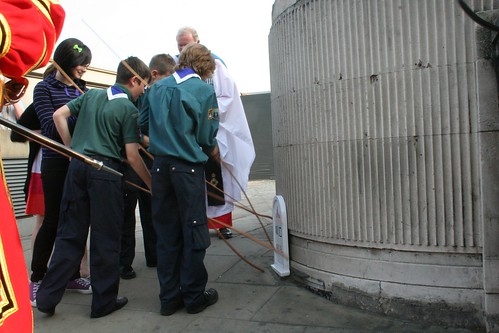 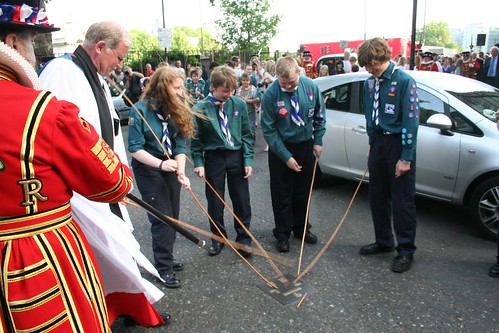 In the middle of a side street 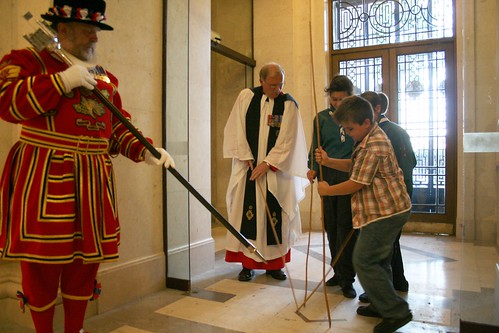 Brass marker lain in the floor inside Trinity House 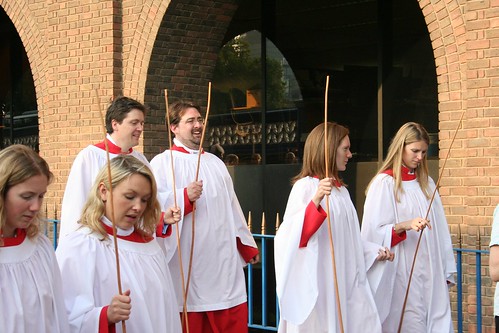 Not just Beefeaters and Scouts doing the thwacking

If you missed it last night – then put a note in your diary for May 29th 2014, for that is when the next confrontation takes place. However, All Hallows Church next to the Tower of London also Beats its own parish Bounds, and that takes place each year – as I watched last year.

All Hallows Church also plays an important role in the ancient Knollys’ Rose ceremony that takes place in a couple of weeks time.

My thanks to the Tower for letting me inside to see the private part of the ceremony, and to photograph it for your pleasure. 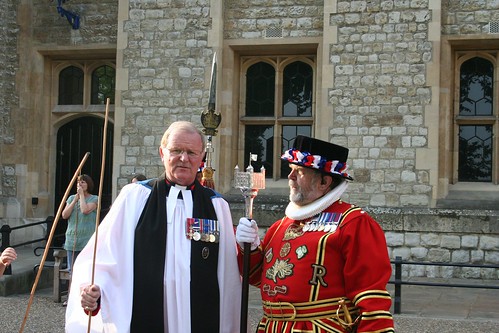