A visit to Croydon Palace

A long time ago, when Croydon was less a collection of indifferent office blocks and more green, it was also one of the more important residences of the Archbishop of Canterbury. A large – by the standards of the day –  Palace was constructed and a large chunk still remains to this very day, lurking largely unnoticed in a side street slap-bang in the centre of town.

Today, the buildings are occupied by a girls’ school,  but during the holidays the preservation society hosts guided tours of the buildings so I wandered down there earlier today for a look. The numbers on the tour seem to vary wildly, as they had 20 people yesterday, but today just five of us showed up. Better for me, but less so for them as the tour fee (Â£7) funds restoration work.

As the buildings are now a school the current paranoia about “nasty men” pervades and alas, no photography inside the buildings is permitted, even though there are no schoolchildren around at the moment. Personally, I think it is a silly rule so long as photos are limited to the architecture, but it isn’t worth arguing the point, and the guide was only following orders on the subject.

Anyhow, the Archbishops had their famous Palaces in Canterbury and Lambeth, but as it took a few days to ride between them, a string of Palaces was built, at Charing, Maidstone, Wrotham, Otford and Croydon. The Palace at Croydon was considered the most important mainly as it was within easy reach of Lambeth so it became a convenient weekend retreat away from London. 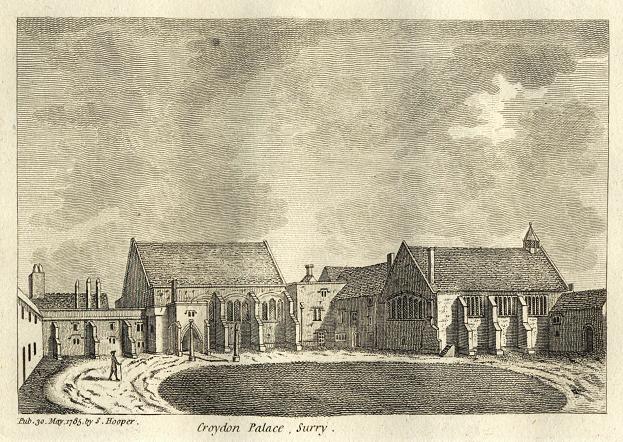 There has been something on the site since at least the 9th Century and various records of the history of buildings on the site exist. However, it wasn’t until sometime around 1443-52, during the time of Archbishop Stafford that a Great Hall of stone was constructed on the site – and apart from some remedial work in 1741 and damage from a fire in the 20th century, it is largely intact. The huge wooden beam roof is notable for being “golden oak”, that is not blackened as was the fashion in Elizabethan times. Although not as grand as the Hammer-beam roofs in Westminster and Middle Temple, it is still pretty impressive for a roof built over 500 years ago. 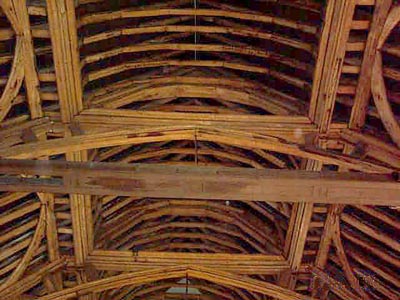 Next is the Guard Room, built by the earlier Archbishop, Arundel – although the reason for its name is a mystery, which also has a wooden barrel roof, but alas all covered in plaster so it is impossible to see the detail. Lots of stonework is still visible though, and that is quite impressive.

The later Archbishop Morton turned out to be a bit of a privacy nut and resented dining with other people in the Great Hall so had his own private dining room built – and here you can see an original Tudor wooden roof, although it is spoilt by the modern lighting needed for the current occupants of the building. Then onto what was one of the more interesting parts of the building, which is a largely untouched Jacobean era staircase which also comes with its own ghost. An exorcism as recent as the 1920s seems to have been rather unsuccessful and the ghost of a lady who threw herself down the stairs in despair over a jilted lover still lingers – allegedly.

Passing the gruesome staircase you come though into the Archbishop’s own chapel with original wooden fittings. The stained glass is more recent, and would probably glow most ethereally on days somewhat less rainy and grey than when I visited.

A break for tea and cake – and as we were a very small group, an unusual detour into an office where a floor panel was lifted to reveal the original Elizabethan tiled floor under the modern flooring, along with the corpse of a dead mouse which had been there for at least 100 years, and will be left in peace (excepting gawping tourists) forever more.

After tea – upstairs to Queen Elizabeth’s Room, where the Queen would stay when visiting and while some of the wall panelling was visible and the Tudor ceiling still impressive, the modern occupants are definitely the dominant factor in here. Likewise for the Long Gallery, which is now split into two classrooms.

The undercroft, which contains most of the original Norman stonework is no longer available as it is staff offices. I seem to be having an unlucky patch at the moment with undercrofts being closed/off limits when I visit places. Damn.

A large parish church stands beside the Palace buildings and is looks like it will be worth investigating another day – especially as six of the Archbishops are buried in the cemetery. I told you the place was important!

Overall, it’s quite an interesting tour around the buildings, with the whole package lasting about 2 hours so it’s not bad value for money and you do learn about a bit of Ecclesiastical history which is not that widely known by us laypeople.

The next set of tours in late May – details on my events guide.

DiamondGeezer had a visit to other notable venues in Croydon earlier this year.

1 Pings/Trackbacks for "A visit to Croydon Palace"