A New Asylum for Idiots

Another snippet from my collection of the Illustrated London News – this time of March 1854 detailing the fund raising efforts of an educational charity that wanted to offer specialised education to “idiots”, or those we would today tend to associate with autism and other developmental disorders.

Although we tend to consider the medical views of the times to be almost barbaric – often treating developmental illnesses as the results of sin or indolence, there was also a charitable view that such persons should be looked after as patients rather than prisoners.

Such charities also tended to like rather stunning buildings, thinking the architecture would itself help the recovery of the patients, and modern society still benefits from this architecture, although many such asylums have been since converted into luxury flats.

The Royal Earlswood Asylum was a successor to an earlier building in Highgate, and was funded entirely by donations, including 250 guineas from Queen Victoria. The building was opened in June 1855.

Just over 100 years later – in July 1958 the hospitable ceased to be a charitable trust and was absorbed into the National Health Service. The hospital closed in 1997 as part of the Government’s long-term plan to transfer the care of people with Learning Disabilities into the community, and is now being converted into, you guessed it… luxury flats.

For several decades two of the Queen Mother’s nieces, Katherine Bowes-Lyon and Nerissa Bowes-Lyon, were kept there without visits from the Royal Family and were declared dead by Buckingham Palace in an intentional fabrication. 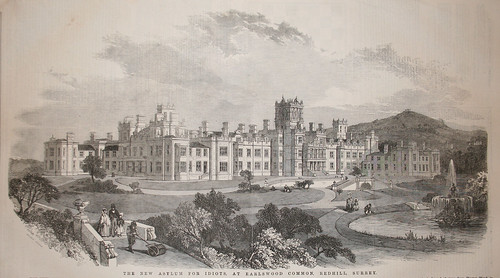 THE NEW ASYLUM FOR IDIOTS

The occurrence, on Wednesday, of the Annual Festival of the supporters of this Institution, has suggested the accompanying Illustration of the grand object to which the exertions of the Society are at this moment directed – namely, the completion of the new Building at Redhill, the first stone of which was laid by his Royal Highness Prince Albert in June last. For this purpose, the Secretaries have just issued ” A Special Appeal,” wherein they state:-

The Board have already received 270 patients and pupils, and they have upwards of 200 now knocking at their doors, and craving admission.

They have declared their readiness to meet the urgent occasion, by providing an Hospital with 400 beds. Still, the Board cannot look to complete this work of  mercy with safety and prudence, except they can during the erection, secure some £10,000 in addition to what they now have for the object.

They submit the matter in its own urgency and simplicity to a beneficent public, and earnestly entreat the needful assistance.

The New Asylum is now in course of erection, at Earlswood Common, Redhill, near Reigate; half an hour distant from town; and is strongly commended by its salubrity, its convenience, and its capacities for the physical exercise of the inmates.

The building will accommodate 400 inmates, classified in the following manner – 84 adult females; 66 adult males; 133 boys; 67 girls, 100 infants. Accommodation is also provided for the Governor, or Superintendent, Matron, Sub-Matron, Steward, Schoolmaster, and Mistress, and their assistants, and an appropriate number of nurses and domestic servants.

The main object in the design of the edifice (after considering the convenience of arrangement and classification) is to present to the eye of the unfortunate inmates nothing that is not calculated to produce an agreeable impression. The | apartments will, therefore, throughout be finished in a neat and pleasing, but at the same time economic, style. Provision is, however, made for a few superior cases, or inmates, whose friends are willing to pay for the great advantages, in point of treatment, obtainable in an institution of this description. Some of these have private sitting-rooms, with accommodation for attendants.

The sitting-rooms and dormitories throughout are 13 feet in height; and the allowance of fresh air to each person is believed to be very much greater than in any other charitable institution in England.

The building is approached by a noble flight or steps from an elevated terrace. The visitor, on entering, finds himself in a spacious hall, 30 by 21ft, with waiting-rooms, attached. Proceeding directly thence, he passes through the principal staircase (in the central tower, 90 feet high), and, crossing one of the principal galleries, enters the children’s dining-hall – a noble apartment, 60 feet by 35 feet, and 40 feet high, with an open timber roof. This room will be used for Divine service on Sundays. Immediately adjoining the dining-hall are the kitchen offices, which are also connected with the other wings of the building at back by light and airy covered ways, 16 feet wide and 520 feet long, in all – which, being formed principally of glass, will serve the purpose of conservatories and greenhouses. The principal recreation galleries are 340 feet long, 11 feet wide, and 18 feet high. From these open the dormitories and sitting rooms. The board-room is a handsome apartment, 30 feet by 21 feet, having an open timber roof and paneled ceiling. The fittings of the principal apartments are of oak; those of the rest of the building are of deal, stained and varnished.

There are ten staircases in the various departments of the establishment. The principal staircase, six feet wide, is formed of stone, from Hopton Wood, in Derbyshire – a splendid stone, perfectly white, almost equal to the finest marble; the other staircases, of a fine durable stone, from Wingeworth, in Derbyshire The whole of the exterior is of stone, procured in the neighbourhood; the dressings are of Bath stone; and the windows are intended to be filled with plate-glass, which, being bedded in the stone itself, is considered more economical than glass of an inferior description with wood frames, while a much finer effect is produced.

The declivity in the ground on which the Asylum is being erected, has enabled the architect to introduce under one of the wings a basement, containing suitable workshops for tailors, shoemakers, basket-makers, carpenters, upholsterers, and other trades. The inmates of the Asylum are instructed in these trades, and have the advantage of every description of gardening, &c., as the estate of the charity consists of upwards of 120 acres. The building is supplied with bathrooms, plunge bath, and other conveniences; and everything necessary for the health and comfort of the unfortunates who may have to reside within its walls.

The contract is taken, at the sum of £29,440, by Mr. Jay, the contractor for the new Houses of Parliament. Works to the amount of about £300, are, how ever, not included in this contract. These, with the fittings, &c, will probably make the total cost of the building, fit for habitation, about £35,000.

The architect is Mr. W. B. Moffatt (of the late firm of Scott and Moffatt), of No. 2, Adelaide-place, London-bridge.

The annual festival of this interesting charity was held at the London Tavern, on Wednesday evening. In the absence of the Duke of Cambridge, it was expected that Lord Monteagle would preside, but he also was  prevented from doing so by the pressure of public business, and Lord Dudley Stuart, M.P., kindly consented to take the chair. He was supported by the Rev. H. Christmas, Rev. E. Sidney, Dr. Conolly, Dr. Tuke, Dr. Little, and other friends of the society.

The usual loyal toasts having been given, that of “The Army and Navy,” which came next, was received with great enthusiasm. The chairman ‘ made a few appropriate remarks on the subj ect; and the toast was replied to by Captain Scobell, R.N. and M.P., who happened to be present at the anniversary of the Seamen’s Hospital Society, in the house, and on hearing that there was a gathering of Englishmen without a soldier or a sailor among them, he deemed it his duty to say a word or two on behalf of the service. In allusion to the present aspect of foreign affairs, he stated that he had served in the Baltic for three years, during the late war, at the time when England blockaded the Russian fleet. T he latter remained close in harbour, and as there were no screw steamers then, the British fleet was unable to reach them. This country had much greater difficulties to contend with at that time than we have at present, as we had both Denmark and Sweden opposed to us. In the war we were now about to wage, England would have plenty to do, but he felt confident that every man would do his duty.

The chairman, in proposing the toast of the evening, enlarged on the benefits derived from the Society by the most helpless class of the community, whose intellectual defects were, by gentle culture, supplied, and in many instances so far removed as to enable the inmates to engage in some active pursuit.

Dr. Conolly, the Rev. E. Sidney, and other gentlemen afterwards addressed the company. The list of subscriptions during the evening exceeded £1300.