Published 12 May 2010 by By Ian Mansfield Events and Tours, Politics

As politicians traipse into 10 Downing Street to learn what second jobs they will get in addition to being an MP, I decided to brag dig out this photo of the time I once also passed through those hallowed doors.

I was fortunate to have a guided tour of the main staterooms of the building on the first floor, although I didn’t get to see the ground floor Cabinet Room as it was in use at the time. Well, it is a working building after all! 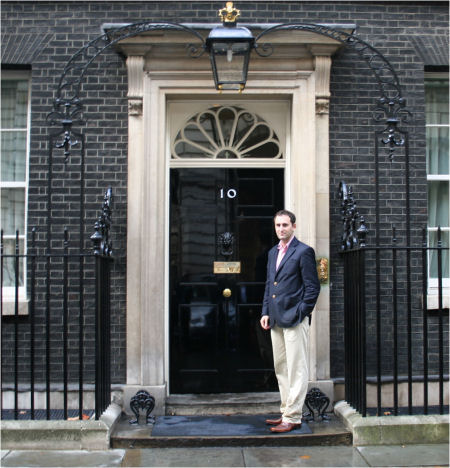 The tour was quite fascinating, and unlike most old houses (or Buckingham Palace), we were not held back from anything by ropes or stern admonitions not to touch things – it was a very hands (and bums) on tour, including sitting on some very expensive chairs in the pillared room as our genial guide regaled us with anecdotes about the building, and gossip about politicians who have worked there.

At the top of the famous staircase is a small waiting room with various notable exhibits, including a very small Union Flag that had been taken up to the moon on that first landing – and a bust of Winston Churchill with a rather polished head. There is a superstition that touching Winston’s head brings good luck, so, errm, why not. You never know!

Of course, now every time a TV show features the inside of 10 Downing Street, I can shout at the screen about the bits they get wrong!

In fact, I am not sure why a TV studio hasn’t built an accurate mock-up of the interior of the building, considering how often it features on Dr Who nowadays. Must be cheaper than hiring a posh house each time.

Although tours are not really available to the general public, if you represent a “suitable organisation”, take a punt and write to 10 Downing Street asking to be considered for a tour. If your letter gets to the right person and manages to tick the necessary requirements – I took several attempts, and still don’t know what tipped the balance – then a formal application has to be filled in. That in turn is considered by a Committee. After all that, if approved, there is a long waiting list and the group I represented waited about a year before we were allowed inside.

But it was worth the wait. 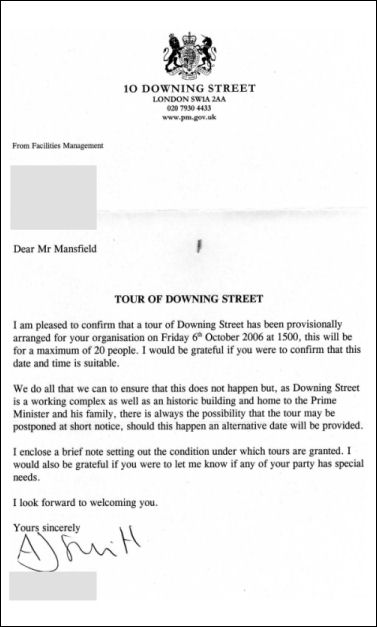