Rochester is famous for many things – but most visibly for the modest-sized castle in its town centre. Less visible, but of considerable fame to the subterranean community is the huge network of tunnels that runs almost from the castle to the edge of town.

This tunnel network under Rochester is nothing to do with the castle though – it is a modern network built during World War 2 as a joint air raid shelter and underground factory for the nearby aircraft manufacturers.

Thanks to my membership of SubBrit, I was able to join a small group on an officially sanctioned wander around the tunnels. 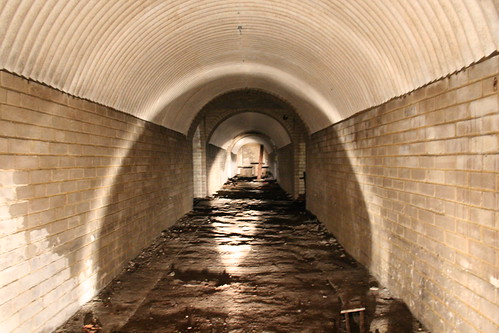 I say “officially sanctioned” as sadly the local teenagers have a habit of breaking in at times and playing havoc with the remains. Not only dangerous as the site is not at all visitor friendly, but infuriates the people living above ground who do not appreciate people climbing over their back gardens.

A recent incident where some kids decided to light a fire in the tunnels resulted in the fire brigade having to send teams in with breathing kit for four hours to secure the site and put the fire out. Ouch!

For that reason, although we had full permission to take photos of everything and the place is not a total secret, entry was on condition that we are a bit vague about where the main entrance is and not show any photos of the air vents etc lest it encourage more foolhardy locals to break in.

Shorts Brothers started off as an seaplane manufacturer on the Isle of Sheppy, but later moved to Rochester in 1913 due to the need for larger facilities. Here they expanded considerably over a 3.4 hectare site.

In 1936, they opened a factory in Belfast. During the Battle of Britain, the Rochester factory was heavily bombed by the Luftwaffe, which meant most of the manufacturing was then concentrated in Belfast.

However, the Rochester facility was still useful, and in 1941 they secured permission from the Ministry of Aircraft Production to build an underground factory next to their overground factories.

The tunnels were intended to create 12,000 square feet of workshop space at a cost of £20,000 which, it was acknowledged was somewhat higher than a new surface building but the stress was upon the vulnerability of the Medway estuary.

After the war, Shorts moved entirely to Belfast – where it still exists – and the underground tunnels were used by Blaw Knox as storage. The whole site above ground was cleared in the 1990s for housing development, and many of the tunnel entrances were blocked off.

Arriving in Rochester, I met up with the rest of the SubBrit team as we donned very necessary boiler suits and hard hats prior to walking to the official entrance – which is currently a rather nondescript door.

Inside we are initially in a series of conventional squared-off rooms, which turned out to be the medical centre. Underground changes to the structure include some modern drainage pipes and in a couple of the rooms we had to pass through, there are modern structural walls running across the rooms to hold up the housing above. There were small gaps in the walls to allow access to the deeper tunnel network. 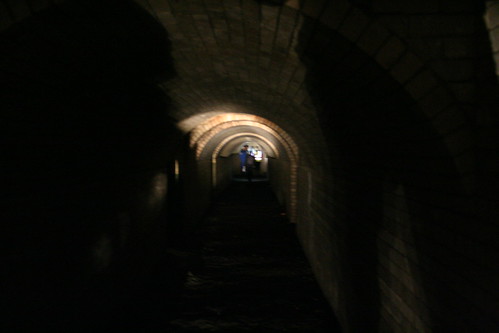 Now into the tunnels proper, these were the air raid shelters, so not huge in width/height. The tunnels were cut out of the chalk bedrock, so didn’t need the sort of tube-tunnel structures we need in London’s clays. The walls are lined with tiles, and the curved corrugated iron roof would have been familiar to anyone using an Anderson Shelter.

There is absolutely no lighting down here – so the only illumination came from our torches. 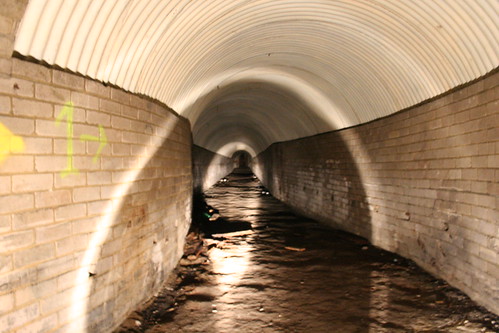 Running along all the tunnels were small alcoves – which were variously mens and ladies toilets. The lack of plumbing suggests they would have been chemical latrines, and the lack of door fitments suggests possibly just curtains for privacy. 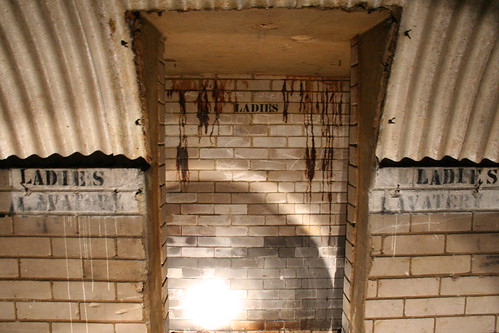 There were also circles cut into the curved roof at regular intervals which caused considerable head-scratching. The consensus in our group was that they were recesses for light fitments – although the wiring would have to have been on the surface for access – but that is just an educated guess.

At various locations were the rusting remains of iron doors that blocked access to smaller side tunnels, which we presume would have been stores. 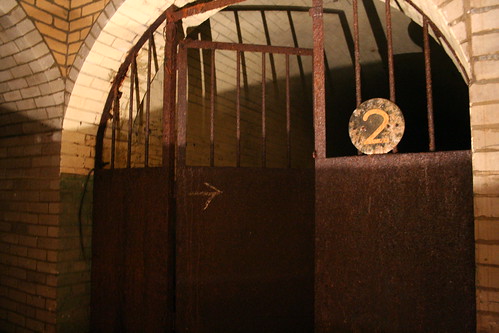 There were also recessed boxes in regular locations, and the remaining wall decoration suggested these were cupboards holding first aid supplies.

The visit to the air raid tunnels was basically walking, looking, photographing – and repeat.

At various locations throughout the tunnel complex, later brickwork had blocked the tunnels – but holes of various sizes and comforts had been knocked through. Some were simple to walk through, some needed contortions and help to get through. 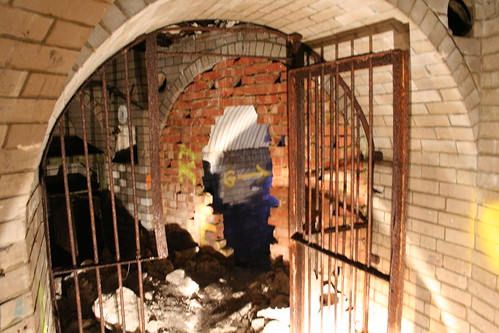 Into the factory at last, and here are a series of vast tunnels – that is around three stories in height at their centres. 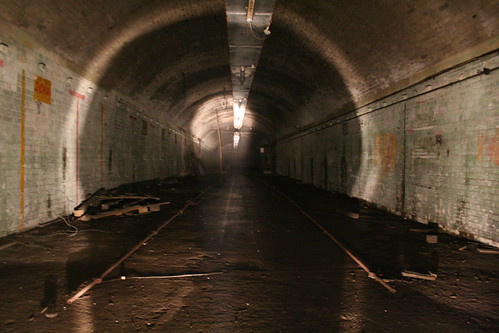 Here, I had a serious problem.

My long lasting lantern torch had failed to charge the day before, so I had taken my mid-life torch, which should last a good couple of hours, but had already died. I was now relying on my “floodlight” which I use for photography – but it doesn’t last long. Taking my leave of the group I decided to head back out before I got plunged into total darkness.

On the way back, I ran into more of the group, and was persuaded to return as a collection of ten handheld torches means I could see enough of the floor not to trip over the rubble, and my floodlight was kept to flashing at places and lighting up for photos. It just about survived until we left about an hour later. 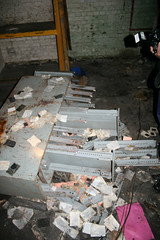 I shall be holding a torch audit before my next subterranean adventure!

The factory tunnels, although cleared of most of their kit do still have some remnants left. Sadly most of these have been damaged by the kiddies and a lot has been lost. A filing cabinet that we found would be a treasure trove to aircraft historians as the area was scattered with paperwork and microfiche documents with plans and drawings.

As befits a factory floor, there were a couple of large air shafts to the surface in two side rooms, and air conditioning ducts ran around the roof. No photos of the air shafts as the owners are in a constant battle to stop people using them to get into the tunnels.

After a good wander round the huge tunnels, it was back into the narrow tunnels and time to head back – but not without exploring some of the side tunnels. Of particular note was a very deep water well in a side tunnel. 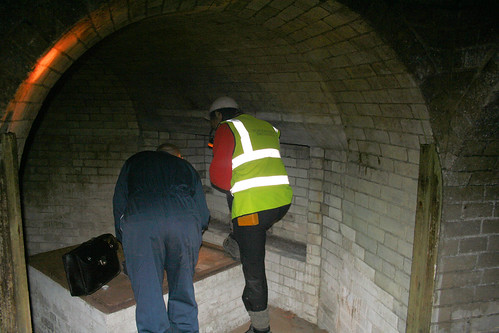 Despite doing nothing more than walking around and taking photos, were were down there for a good two and a half hours, which may give you an idea of the scale of the place. And we didn’t even see all of it!

Below is a map of the tunnels – kindly supplied by SubBrit, and based on a survey by Kent Underground Research Group.

You can see the large factory on the right, the long single tunnel, then the very confusing complex of tunnels for the air raid shelter.

Another fascinating day – despite my serious torch panic – and public thanks to the organisers over at SubBrit.

If like me, you are interested in such tunnels, then I do strongly recommend joining SubBrit. The membership gets you a regular magazine, but you can then join the emailing list which is where a lot of the group visits are organised.

Membership is currently £18 per year.

I took loads of photos – of which 69 seemed OK to publish. A few are a bit blurry, but included as they show interesting topics. The rest were either of restricted areas or failed in the darkness to come out.

I think this is my favourite photo of the whole set. Although it shows almost nothing of the tunnels, I like it. Lots.

3 Pings/Trackbacks for "Visiting a huge tunnel network under Rochester"