Later this week, the first major Dickens themed exhibition in London since the 1970s opens its doors to the paying public, and starts a year of Dickens this, Dickens that and more Dickens over here as everyone tries to jump on the 200th anniversary of his birth.

With such a glut of Dickens over the next year, it is quite a relief that this exhibition is more about the London that Dickens would have known with rather less of the display for “holy relics” in the form of special edition books or personal artefacts.

As someone who likes his works, but is not a huge fan, diluting the Dickens with more Victorian London makes the exhibition easier to access and should also widen its appeal to those who might be a bit worried about being surrounded by books and references they don’t understand.

The display is a large rectangular space, with a huge wall splitting it in half, and on the entry side, three huge atmospheric videos offer misty clips of images from London and the Dickens stories.

Oh, do notice the bollards between the video walls though – they are from outside Fenchurch Street Railway Station and date to 1841.

A side room with displays of posters advertising the plays of the times, including the hugely popular Oliver Twist, also has some wonderful coloured prints on one wall. These were sold as B&W prints of famous actors of the time, then the household would decorate them. 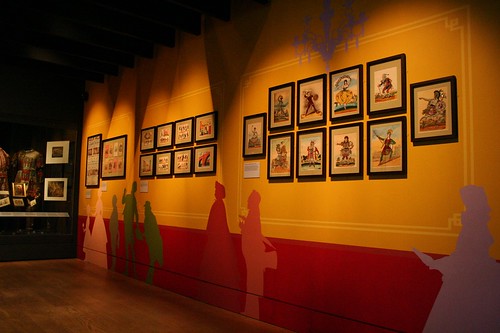 Dotted around the rest of the exhibition are tiny early photographs and large oil paintings. One that caught my eye is of York Water Gate and Adelphi by Henry Pether.

York Water Gate is sill in the same place, but today that location is not longer next to the river.

Any display about Dickens just cannot avoid that famous unfinished painting of the author asleep in his chair dreaming about his characters. Obviously, this exhibition has that famous painting by Robert William Buss.

They also though happen to have the very table and chair that features in the painting. 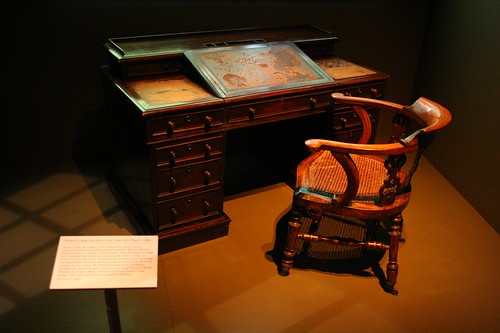 A couple of displays of Dickens memorabilia, including rather bizarrely a soup ladle complete the person specific display.

The rest of the room is given over to the London that Dickens would have known – and a huge Stanfords Map will delight most people, although a map of the telegraph cables across Europe is more interesting.

A video display of photos caught my attention for rather a long time, as it showed the construction of the Metropolitan District Railway – today’s Circle and District Lines – and included the famous Leinster Gardens. 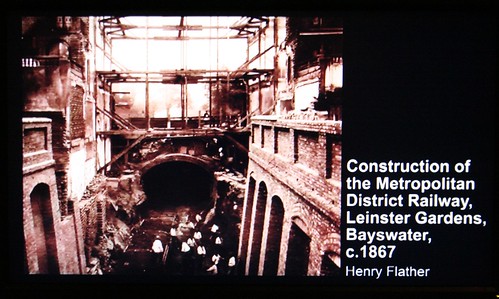 Tucked away in a corner though was my favourite painting of the exhibition, called simply Buckingham Street, Strand and painted in 1854. Not just atmospheric, but it also included the original Hungerford suspension bridge in the background.

It was next to the fire exit. Hmmm!

A video art finishes the display – based on a famous walk Dickens took home one night and later wrote down. 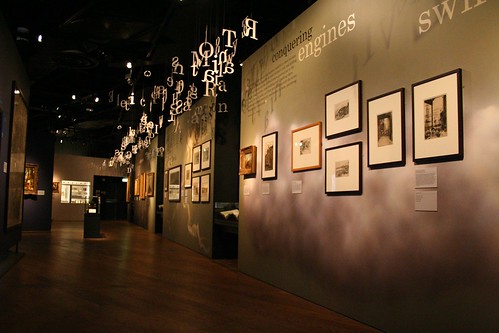 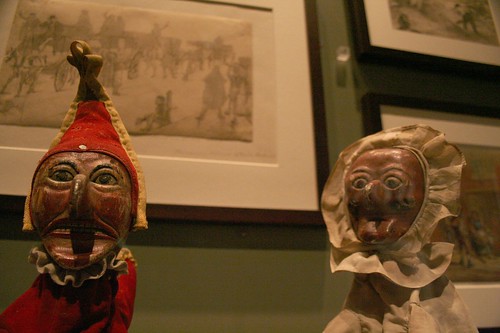 The exhibition opens on Friday and runs until next June. Entry is £8 (£7 advance booking).