Opposite Southwark tube station is a tall pole, and on top of the pole is a dog and a bowl, and they are there in memory of Charles Dickens.

Normally, buildings occupied by someone famous get a small blue plaque, but when you're Charles Dickens, you get a huge stone mural instead.

In the mid-nineteenth century, the great age of railway building, Charles Dickens could not but be aware of their transformative impact on society. So he wrote about it often.

Childhood in Dickensian London at the Senate House Library

With this year marking the 150th anniversary of Charles Dicken's death, an exhibition is looking at the sort of childhood the average person could have expected when he was a child.

This narrow alley off Cornhill lined with a mix of old bricks opens to a court space, and was once home to the offices of Dicken's Ebenezer Scrooge

This is one of those seemingly ancient alleys that the City of London is so rich in, yet almost impossible to find anything about. 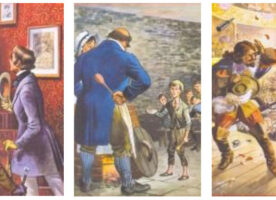 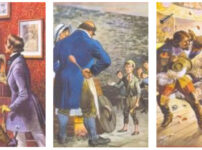 A collection of original illustrations by Thomas the Tank Engine artist, John Kenney, have gone on display at the Charles Dickens museum, to celebrate the life of the novelist.

The arts organisation that is behind some of the

Later this week, the first major Dickens themed exhibition in London since the 1970s opens its doors to the paying public, and starts a year of Dickens this, Dickens that and more Dickens over here as everyone tries to jump… 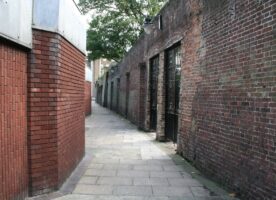 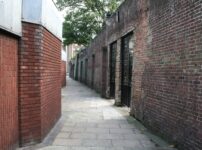 At some point in 1811 -- the specific date has been frustratingly difficult to pin down -- a new prison was opened in Southwark that despite its short life was to become notorious in literary history as the inspiration for one of Charles Dickens novels.

Wandered over to the Genesis Cinema in Mile End last night to see a showing of a lengthy documentary about Charles Dickens – specifically the places he lived in and how they influenced his writings. Narrated by Derek Jacobi, the…