Published 12 October 2009 by Events and Tours

Sunday mornings are a good time to take a wander round a nearly deserted City of London. However, had you tried that yesterday, your contemplative meanderings would have been interrupted by a marching band and some 200 longbow archers parading though the city. 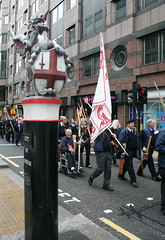 The March of the Archers was a seemingly one-off event which brought in archers from various countries to meet up with their London counterparts and do a bit of archery practice in the grounds of the Honourable Artillery Company.

After a short muter within the grounds of the Guildhall, they marched round the empty streets to the HAC, while early builders or office security guards peered out of their buildings with a look of mild bemusement on their faces.

The march was organised by the Fraternity of Saint George, which is celebrating its 500th anniversary (if you ignore the long period when it didn’t really operate). Apart from the fact that the march occurred, I can’t really say all that much about the event, save to comment that it still feels surreal to see old marching bands and pageants in the modern city streets.

A spent most of the time running around taking photos of the marchers – and the collection of photos is over at my usual Flickr account. 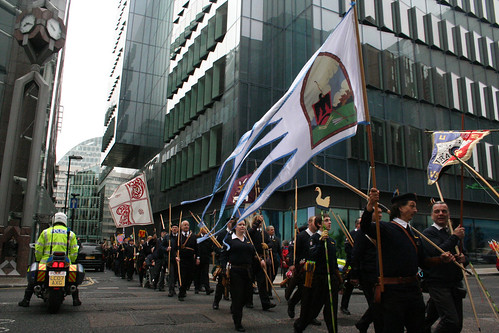