If you travel around London today, keep an eye out for remembrance wreaths laid at key transport locations — in memory of transport staff who died in WW1.

Logistics has long been understood to be vital to a good war machine, supplying food and weapons to the front lines, and ferrying the wounded back to safer locations.

This year, appropriately, much is being made of the London Buses that were shipped to France. More than 1,000 B-type buses were requisitioned by the War Department for use on the Western Front. Not all of them returned. 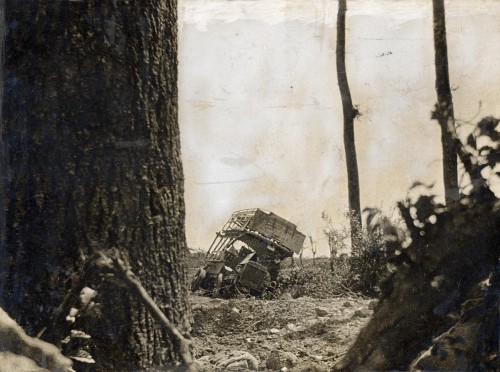 However, it was also the mass movement of troops as they passed through London to the coast and then to France that occupied the efforts of the railway staff.

Leon Daniels, Managing Director of Surface Transport, will be joined by bus staff and Old Comrades at Merton Bus Garage.

An exhibition at the London Transport Museum talks about London’s Home Front during the First World War and tells how drivers took their buses to the Front to support the war effort.

At the heart of the exhibition is ‘Ole’ Bill’, a 1911 B-type bus No. B43 on loan from the Imperial War Museum. It was one of the first buses to be requisitioned during the war and after the conflict was refurbished as a permanent memorial to the role played by London bus staff. On 14 February 1920 the bus was inspected by King George V at Buckingham Palace, the first time the King had boarded a bus.

Because of the war service by civilian staff of the London General Omnibus Company, King George V agreed that a contingent of transport staff would be allowed to march to the Cenotaph, in the annual service on Remembrance Sunday; for many years the only civilian organisation afforded this privilege.

This year the recently restored B-type ‘Battle Bus’ will accompany the London Transport Old Comrades Association (LTOCA) on Remembrance Sunday as they march down the Mall to lay a wreath at the Cenotaph.

Memorial wreaths will be laid at:

If you are in the area, look out for the permanent memorial at Victoria Station — to the train that carried the body of the unknown warrior on its final journey home at the end of WW1.

And finally, did you know that all the remembrance poppies distributed in England are made in London? At Richmond in fact.