On board Greenpeace’s Rainbow Warrior

Published 21 November 2009 by Events and Tours

A rather unique opportunity presents itself this weekend, and that is the chance to visit one of the more famous ships in the world – Greenpeace’s Rainbow Warrior. No, not the one the French sank, the other one.

The ship is having a two-day stop over in London before heading up to Edinburgh next week then over to Copenhagen for the Climate Change Conference.

A disclosure – I am not entirely a supporter of Greenpeace. I believe their aims are honourable, but I believe they are often a bit naive about the complexity of the issues and that there are better ways of dealing with problems. That said, they are very good at raising issues with the media, although the media tends to be a bit shy of them after it was burnt by the Brent Spar controversy. 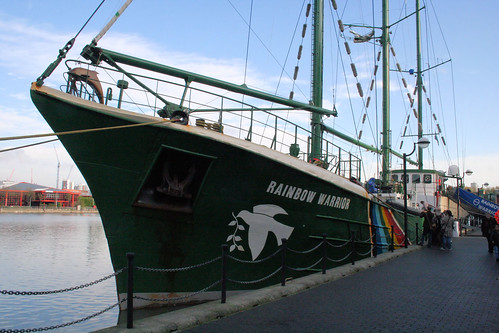 I am not going to detail everything they said, as much of it was informative without being too detailed – this was very much a look, point, gawp, move along tour – which is actually quite ideal for these sorts of things.

A fair bit of time was spent explaining who Greenpeace is, and the history of the ship and the organisation’s involvement with the French secret service, which was to be expected. Then we were handed over to one of the chaps who look after the engines and the talk became a bit more technical about the running of a ship and dealing with maintenance issues and the like.

You don’t get to see the engines though – this is entirely an above deck visit.

Although the ship has sails, and will use them, as it is a converted fishing vessel, it is not actually that good as a sailing ship. However, on the trip from Spain to London, they managed 4 days of sailing out of a total trip of 8 days and saved 6 tons of fuel, so not that bad. When asked why more ships don’t dual-mode, the engineers was refreshingly frank about the problems faced and the skills need to manage a sailing ship.

While the environmental aspect is obvious, the economics are far less viable.

Almost to remind us of the problems, a more traditional tall sailing ship just happens to be moored alongside the same dockside this weekend. Quite a comparison.

I’ll leave the photos (over at Flickr) to tell the tale of the tour of the Rainbow Warrior.

The ship is based in docklands today and tomorrow (21st & 22nd Nov) and a quick chat with one of the ladies assured me that you can just turn up tomorrow and ask to join a tour group. You can formally book a place via their website, and that might be wise – although she doubted you would get the confirmation email.

Just turn up and – caveat emptor – if places are available, you’ll get a tour.

The ship is just around the corner from the new South Quay DLR station, and easy to spot.

For me, the tour made quite an interesting contrast on so many levels with a visit to a very different ship earlier this year, when HMS Illustrious visited Greenwich for a few days.