During World War 2, the number of telecoms exchanges in London was quite limited, and one of the main exchanges was based in the City of London – quite some distance from Whitehall. As above-ground phone lines were out of the question, a hybrid network was created.

In essence, a tunnel under Whitehall was built using conventional tube tunnelling techniques. Cables from here could be routed up to the then Trafalgar Square Station (now Charing Cross), run round to the Bakerloo Line and then through that tunnel down to Waterloo Station. Here, the cables routed round to the Waterloo & City line and not far from Blackfriars station, a narrow pipe was sunk to run the cables up to the Faraday Building.

Other cables were routed from Whitehall to systems outside London also by being laid through the tube tunnels and then to overground networks away from the main bombing targets.

This secret government “escape tunnel” is actually just a service tunnel – albeit rather a large one. Q-Whitehall is the (possibly unofficial) name given to it. Although not really designed for regular human use, it could be used as a route between Whitehall buildings in emergencies, such as during gas attacks.

Back onto the rumours, it is widely known that quite substantial upgrade work was carried out in the 1950s, and the file for that is locked away in the National Archives awaiting declassification. Put a note in your diaries for 2026, as that is when they will be released. Another unfounded rumour is that a further upgrade was carried out about only a few years ago – but that came from just a single, if usually reliable, source a few years ago.

Also, the Whitehall tunnel is reported to be linked to the deep level telecoms tunnels (allegedly) constructed by the Post Office during the cold war. Although British Telecom won’t talk about their network, enough reliable if anecdotal evidence exists to show that it was a very real project. Not to mention, a journalist who broke one day and took photos!

Why am I writing about it today?

Well, just after WW2 ended, there was a short-lived period where the government talked openly about what it had done during the war, before everything clamped down again as the Cold War started. In January 1946, the trade magazine of the post office engineers – The Post Office Electrical Engineers Journal – published a review of some of its activities, and it is one of the very few sources of reliable information about the Whitehall tunnel.

Earlier this week, I finally managed to find a copy for sale and quite naturally brought it.

Below, I present an excerpt from an article about defence communications that details the deep level tunnel under Whitehall and within the tube tunnels.

Although some measure of security was achieved by the provision of alternative routing, the risk of extensive damage to the heavy concentration of trunk and junction cables in the central area was so serious as to make it imperative to adopt an exceptional and notable safeguard by diverting a number of the cables to the public and Post Office tube railways, and a deep tunnel which was specially constructed during the war to accommodate Post Office plant.

The construction of this tunnel, which is 7 ft. in diameter, and at a depth varying between 70 ft. and 100 ft. below the surface proceeded from three working shafts, one of which was retained as the leading-in point for the cables. A lift of sufficient capacity to take full size cable drums was installed in this shaft. Owing to the need for conserving iron during the critical period of the war, the greater part of the  tunnel was lined with reinforced concrete segments instead of the customary cast iron. Plant was installed for the ventilating, draining and lighting of the tunnel. At one point an enlarged offset was constructed to accommodate loading pots. Among the arrangements for cabling was the provision of specially designed roller skates, which were attached to the cables to facilitate their movement to the appropriate section of the tunnel. A total of 60 cables with an aggregate mileage of 62 was installed in the tunnel, in which about 150 cables can ultimately be accommodated. A typical view of the tunnel showing the cables in position is given in Fig. 4. 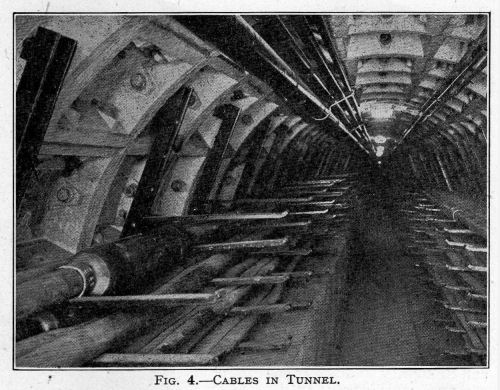 Protection for defence communications was in general more elaborate and certain in its function than that provided for public communications, owing to the fundamental importance of maintaining the continuity of their service. In London this objective was finally achieved by putting the plant deep underground, or in exceptionally strong reinforced concrete structures having walls several feet in thickness. The most notable and comprehensive scheme of this character was the tunnel system constructed for the Service Departments.

This tunnel system is a comprehensive scheme of deep-level protection in the vulnerable central area for equipment and cables, carrying vital defence communications from the buildings of the Service Departments to other parts of the country. Associated with these specially constructed tunnels are the public and P.O. tube railways.

The ultimate scheme represents the accretion of five principal component schemes which were proceeded with at various times during the war. The initial scheme, commenced in December, was a tunnel 12 ft. in diameter and at a depth of about 100 ft., which, intended at the time solely for cable protection, is connected by short lateral tunnels of 5 ft. diameter to the Service Departments and Federal exchange. The latter is a protected exchange in sub-ground accommodation and was provided at the outbreak of the war to give an uninterrupted service for the principal officers in Government Departments. 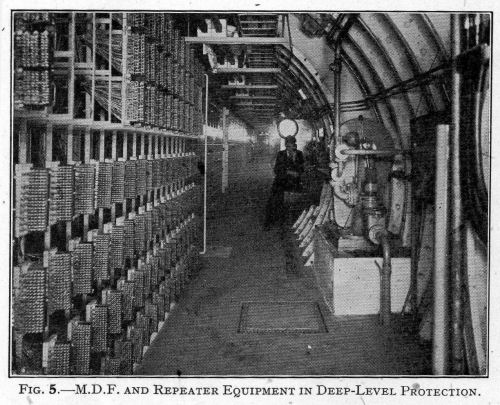 It was obvious that the main tunnel would afford absolute security for telephone and telegraph equipment, the first installation of which was accordingly proceeded with and completed in the summer of 1941 to meet the increasing requirements for defence communications. This equipment, which has been added to from time to time, and now provides for about 4,000 working circuits, includes among the many constituent items, 71 18-channel V.F. systems, 26 canner systems, 13 coaxial cable terminals and 864 audio amplifiers A small portion of this equipment may be seen in Fig 6.

During 1941-42 major extensions of the tunnel, which more than doubled its length, were carried out, affording underground access between various Service Departments and accommodating a teleprinter switched centre. In all, a, total of 1 mile 740 yards of tunnel has been constructed under the various schemes associated with the tunnel system and six shafts with passenger lifts provided The tunnel system is connected via the tube railways to the Citadel building.

These specially constructed tunnels and the public and P.O tube railways have been extensively used to give deep-level protection to cables carrying vital communications. A total of 72 miles of cable has been laid in P.O. tunnels, 116 miles in public tube railways and 20 miles in the P.O. railway

The tunnel system and its connection with the tube railways is an outstanding example of absolute protection for both telecommunication equipment and cables, but there were many other schemes during the war where circumstances only warranted, or made practicable, a lesser degree of physical protection. The Service Departments had many subsidiary installations for operational control, which, situated in areas subject to desultory bombing, accommodated very important equipment As this equipment could not be replaced with sufficient speed without serious interruption to the operational control, it was essential to provide very substantial protection for the installations. The associated line plant, although equally important could be more readily restored in the event of damage, and, moreover, the resulting interruption could be minimized by the provision of alternative routing. The physical protection for such installations usually took the form of a massive reinforced concrete structure, either wholly or partly below ground, with wails and roof several feet in thickness and the interior subdivided to limit blast effects from direct hits which might penetrate the structure.

In the London Telecommunications Region there were nearly a dozen such structures, many accommodating a considerable amount of telephone and telegraph equipment. Fig. 7 shows a view of the switchboard installed in one of these Citadels. In addition, the installation included telegraph equipment for 123 teleprinters and other equipment for the remote control of radio transmitters. Steel pipes for leading in the cables at alternative points were laid during the construction of the Citadels. 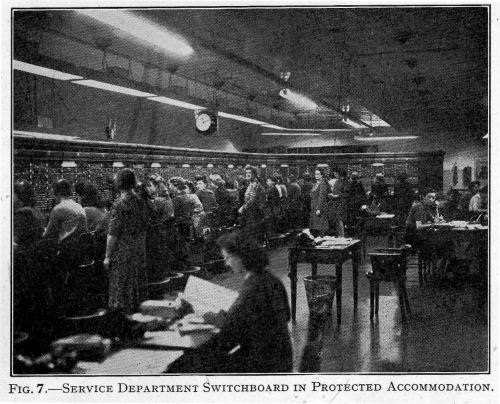 In London the tube railways were used extensively to give deep-level protection for a few miles for the cables radiating from the central equipment. Beyond the emergent points from the tube railways, however, the cable routes were as vulnerable as any other underground plant at shallow depth, and with the persistent and widely dispersed bombing in 1940-41, the incidence of damage to these routes was sufficiently serious to require special measures to mitigate the effects of the interruptions.

The scheme adopted entailed the linking up, by circumferential cables, of the radial cable routes in the tube railways at a number of selected interception centres located not far from the emergent points. Included in the scheme were many of the surface trunk cables, which were intercepted at exchanges adjoining the main routes. At several places where the circumferential and radial routes intersected, and exchanges were not conveniently situated to intercept them, substantial pill-box structures, in which an interception frame was installed, were constructed. Interruption by bomb damage to any of the radial cable routes could thus be readily restored by suitable re-routing of the circuits over the circumferential cables at the interception centres.

The London scheme, started in the late autumn of 1940 and completed during the following year, involved the laying of 250 miles of loaded cable of various sizes An interesting feature in the cabling work was the completion of the circumferential cable system across the Thames by using the 12 ft. diameter pilot tunnel at Dartford, which had been constructed before the war in preparation for building the main vehicular tunnel.

The inclusion of the surface trunk cables in the scheme enabled not only defence circuits to be rerouted, but also important trunk circuits which had been interrupted by bomb damage to the radial routes, a facility which exemplified the duality of purpose of the Post Office telecommunication network in the national prosecution of the war.

3 Pings/Trackbacks for "More on the “secret” tunnel under Whitehall"