Climb to the top of the Tower in Windsor Castle

Published 21 January 2011 by By Ian Mansfield Events and Tours

As an ex-Windsor resident myself, this rather excited me – as Windsor Castle is for the first time going to let tourists ascend to the top of the Round Tower that dominates the stony fortress.

OK – it’s not London, but indulge my interest in getting to the top of tall things!

Official blurb: On a new guided tour, ‘Conquer the Tower’, they ascend 200 steps to a height of 65.5 metres above the River Thames, where they can enjoy breathtaking views of the Castle and Windsor Great Park, the Thames Valley and the London skyline.

The Round Tower can be quite rightly said to dominate the area, and although its core can be dated back to the 12th century, most of what we see is actually a 19th-century refurbishment.

There is a local version of the London Eye sitting down by the river, who might have to pack up and go home for a few months – as who will want to look up at the tower, when you can look down on the wheel? 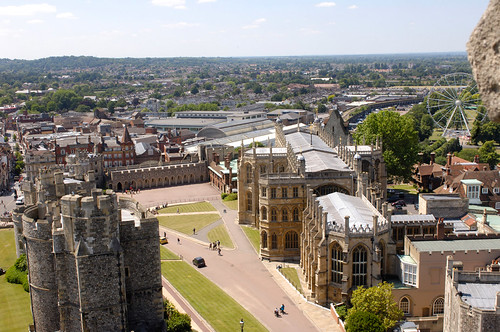 Other Tower climbing blog posts that might be of interest:

Photos of London from the top of the Millbank Tower