Art on display in a multi-story car park

A car park that is more used to storing cars might make a suitable location of one of those achingly fashionable art events that the Old Street/Shoreditch posse love so much, but this time the art boffins have fused the two into a single entity.

A collection of cars by a certain Germanic manufacturer having the daubings of notable artists applied to their surface and put inside a concrete box. The collection was initiated over 35 years ago and what you end up with is not just a display of art that is both a romp though the history of art styles, but also through the history of car design. 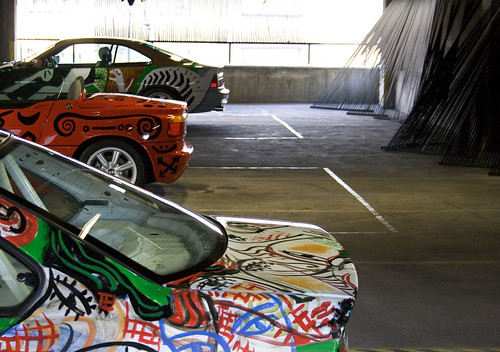 The venue of choice is a notable multi-story car park that offers some amazing views from the roof, if you can ever manage to get up there. Sadly, the art event starts two floors below the roof. Possibly so people will look at the art instead of the views from the roof.

Entry is via the lifts that normally elevate cars to their parking spots, and while the walls have been given a bit of a lick of decoration, ignore that and look upwards instead. You’ll be able to watch the assent to the 7th floor through a see-through grill on the roof. 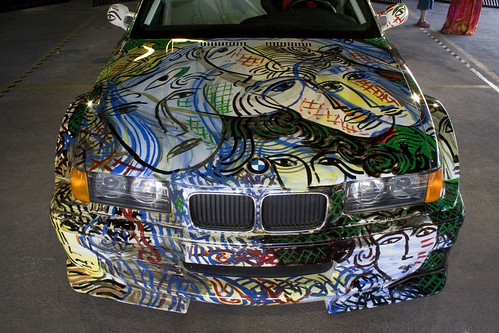 At the top, the whole floor has been given over to just three cars and a desk where they offer a very-free-of-charge but not-entirely-pocket-sized catalogue and a welcoming comment that this may be art, but you can still take photos of it.

Working your way down the floor by floor, a selection of three cars each themed around a genre of art: Back to the Future; Abstraction; Masters of Pop; New World; The Painters and Go Faster. I overheard one couple comment in hush awe that the Andy Wharhol was downstairs, and it did feel as it they had just spoken in italics. 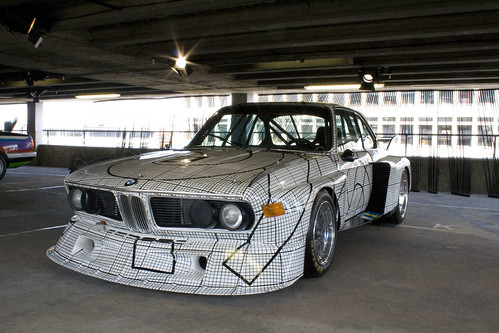 A couple of kids decided that a hot July lunchtime was the correct time for some Christmas Carols. Then again, they might have been part of the art. Throughout the “gallery” a number of impeccably smart suited men patrol, each with a little earpiece and looking very much like Agents from the movie, The Matrix.

Considering that the whole thing is arranged by a certain car manufacturer, the display is refreshingly free of corporate branding, other than that which exists naturally on the vehicles.

Some of the “art” I quite liked, and some I would never go near, including the Andy Warhol effort. Some of the artists have basically “painted a car”, whereas the better examples are artworks that just happen to be car shaped. 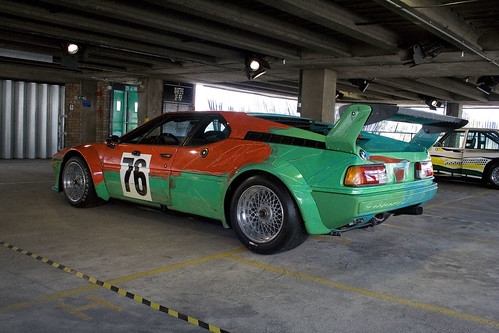 If you are the sort of person who laps up the chance to see works by famous artists, then this is a genuinely rare chance to compare different artists side by side. The artists in question being: Alexander Calder, Sandro Chia, Ken Done, Ernst Fuchs, David Hockney, Jenny Holzer, Matazo Kayama, Jeff Koons, Roy Lichtenstein, Esher Mahlangu, Cesar Manrique, M.J Nelson, A.R Penck, Robert Rauschenberg, Frank Stella and of course, Andy Warhol.

The use of a motor car as canvas is actually quite clever and the fact that each car is also of its era, or in some way special makes this more interesting than the “get people to paint a mass produced shape and flog it for charity” genre that has been so popular over recent years.

I also to tend to like the idea of using old or unusual buildings to display art in – especially when it means I have an excuse to get inside said unusual building. This is such a moment, and a chance to visit what is for pedestrians, an otherwise off-limits structure.

The display, ART DRIVE! has been laid on by the ICA in partnership with BMW, London 2012 Cultural Olympiad and Mayor of London.

The exhibition is open daily until next Saturday (4th August) from noon to 9pm.

Entry is free of charge, and a few more photos of car/art are here. 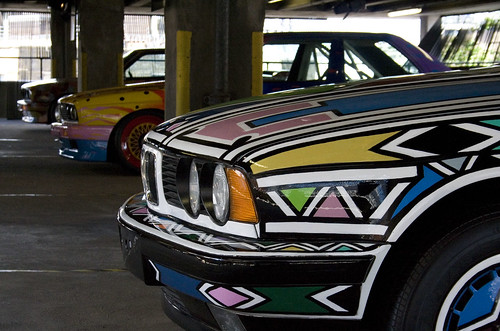