A is for Adolf – Teaching German Children Nazi Values

Published 13 January 2012 by Events and Tours

If you are a tyrannical leader of a country, you will want to cement your long term prospects of holding onto power by making sure the children are suitably indoctrinated to support you.

Thus, during the rise of Nazi power in Germany, many children’s books and toys were produced that promoted the Aryan ideal and when the Nazis had control of the government, the school books were ideologically purged to ensure only the correct pro-Nazi lessons were taught.

A new exhibition about this era has just opened in London, at the The Wiener Library for the Study of the Holocaust situated just behind the British Museum.

It’s inside one of those grand Georgian houses that line posh squares and are invariably now converted into offices. A small sign on the wall indicated the Library’s presence (and a huge sign above that I saw when I left, opps!), and a doorbell to get the door open.

As it happens, the display is in the reception area, and runs around two walls with a middle display of a chilling board game.

A long board gives you a potted history of what happened in children’s books, with samples below them. 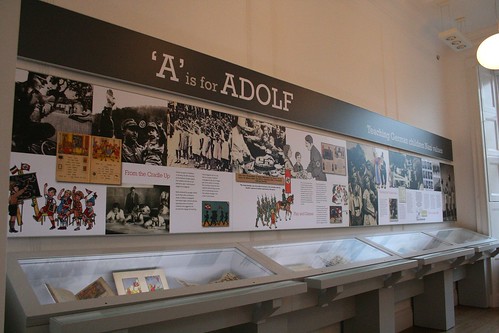 One book had me scratching my head a bit and upon raising a question, the curator came down to investigate. The display board goes into detail about how the Nazi command wanted their ideology and iconography to permeate every strand of society.

I noticed the book had a swastika underneath the letter H, which to my mind at least, looked like a stylised swastika as well. So in effect, the word Heil, is capitalised with a swastika.

Was that deliberate or am I seeing things that aren’t there. Sadly, the answer that they don’t really know, but what do you think? 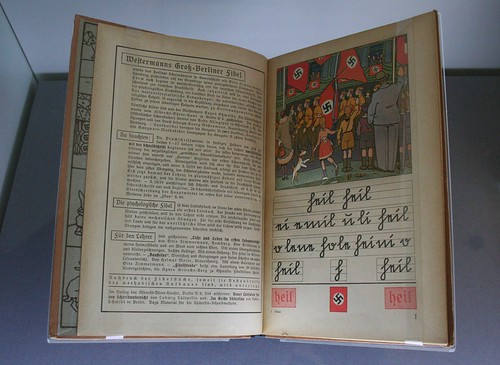 Some woodblock toys were quite amusing in an awkward way, as I really just found I couldn’t help but admire chutzpah of a system that thinks woodblocks that spell a politician’s name would be desirable. 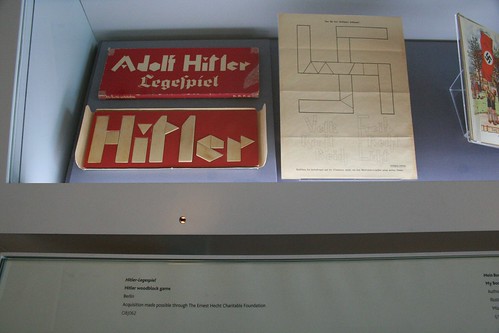 Going back to the language and fonts above, three copies of the Hitler Youth handbook were on display, and the curator pointed out how the fonts changed over the years from the German gothic to a more mainstream European latin style. This was apparently a reaction to the occupation of the rest of Europe, and the growing need for their signs and messages to be legible to those who struggle with gothic fonts. 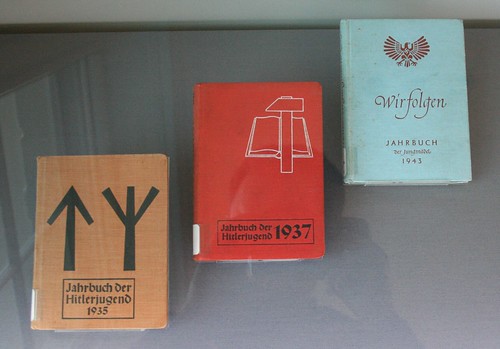 In light of the second Gulf War, where the Americans were handed playing cards with Iraqi leaders they wanted to capture, these Nazi Officials playing cards are almost funny now. 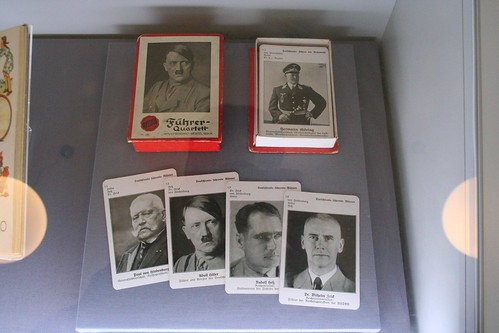 There is however a board game in the centre of the room that sent a shudder though even my usually cynical body – a game where you need to collect and evict the Jews from a walled ghetto. Evict six Jews and you win the game. 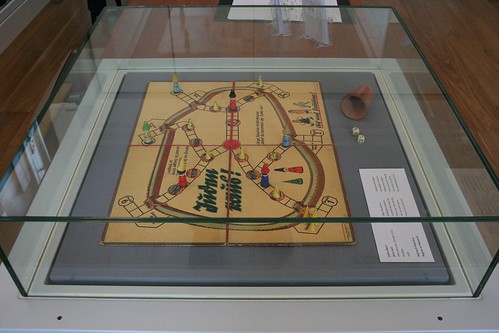 The exhibition is open 10am-5pm Mon-Fri until the 2nd March 2012 and is free. It’s quite a small exhibition, but worth visiting if you are in the area. Very much worth visiting.